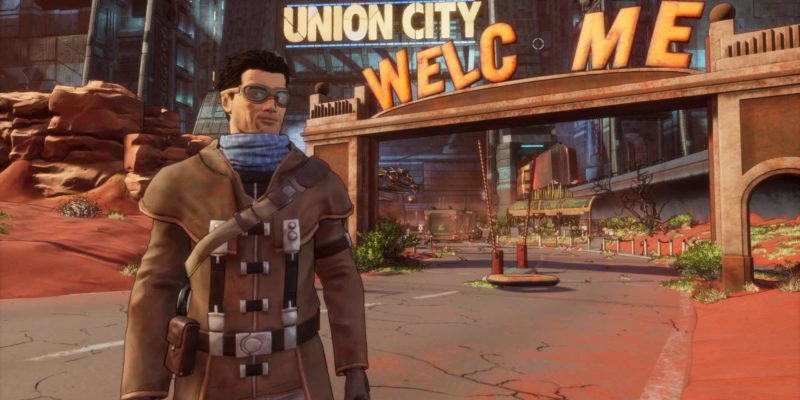 At first glance, a sequel to the classic adventure game Beneath a Steel Sky might seem strange. The cult classic – a collaboration between game director Charles Cecil and comic book artist Dave Gibbons – has remained relatively untouched since its release on the PC in 1994. Meanwhile, the studio Revolution Software has mainly been focused on the Broken Sword franchise of games. At the same time, I was happy to see Beyond a Steel Sky announced alongside the Apple Arcade service, releasing across iOS, Mac, and PCs in the coming months.

Beneath a Steel Sky is available for free on digital stores such as GOG.com, and I remember enjoying the experience when I played it years ago. With that being the case, I was happy to sit down with Cecil and Gibbons for a pre-beta gameplay demonstration for Beyond a Steel Sky.

The game takes place in the futuristic dystopian world of Union City, which relies heavily on robots and surveillance to run everything. Beyond the city walls is a Mad Max-style desert called The Gap. Players take the role of Robert Foster, who uncovered a mystery that changed the city forever in the previous title. He then left to live in The Gap, vowing to never return. But after a friend’s son is kidnapped, Foster returns to the city in search of him. 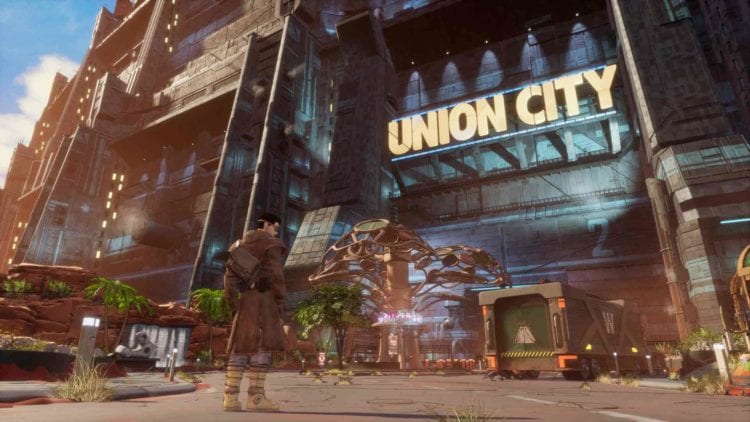 It shouldn’t be much of a surprise that Revolution is one of the first studios on board with Apple Arcade. The studio was close to the financial brink in 2007 when Apple first contacted them. At the time, Apple didn’t feel that the games it was publishing were doing the iPhones justice. So, they hoped that adventure games like Broken Sword might be a better fit, since one of its games had already been ported to the Nintendo DS. It turns out the assertion was correct.

“It’s absolutely extraordinary that a 2D point-and-click game worked so well and was so well received,” Cecil told PC Invasion.

The success of its premium adventure games on mobile platforms helped Revolution recover financially, and the explosive growth of digital distribution gives the studio the freedom to pick its own projects. For example, Broken Sword 5: The Serpent’s Curse was successfully crowdfunded in 2012 and was released across multiple platforms in 2013.

However, Cecil and Gibbons said that they had always wanted to go back to the Beneath a Steel Sky universe. With the announcement and launch of Apple Arcade, now seemed like the opportune time to do it. Adventure games have made a big comeback, with titles such as What Remains of Edith Finch, Return of the Obra Dinn, Life is Strange and others receiving awards and dedicated fan bases.

Cecil also said that the original assertion from 2007 still holds. Apple can boast its games will look and play just as well on an iPad as they do on gaming PCs. At the same time, he believes that adventure games appeal to the broadest audience in the premium space.

The key is to tell a compelling story with a lot of originality. That was what was missing in the early 2000s, when adventure games were fast shrinking in popularity. Cecil remembers the time being a vicious cycle of studios being forced to please publishers who in turn wanted to play things safe with proven formulas. As a result, he admits that the adventure game genre became more expensive to produce while being derivative. The rise of digital distribution has helped indie studios flourish.

“We’re in the wonderful position of where we don’t need to get permission or funding from publishers,” said Cecil. “Instead, we can choose what we think works for our fans.”

Although Revolution is by no means anti-publisher, the studio enjoys having creative freedom. He also admitted that it would have probably been difficult to win publisher support for Beyond a Steel Sky. But according to Cecil, innovation is a critical factor for adventure games, and that’s what Revolution is out to achieve.

Stepping into a virtual theater with Beyond a Steel Sky

Beyond a Steel Sky kicks off as a motion comic catches players up with the backstory before transitioning into a 3D game. The added dimension is a big leap from the original game, which featured 2D comic book-like artwork that added to its charm. In fact, the first game came packaged with a comic book drawn by Gibbons, who is the art director for the sequel.

“In many ways, it’s bringing forward old ideas that had huge potential but we could never quite realize in 2D,” said Cecil. 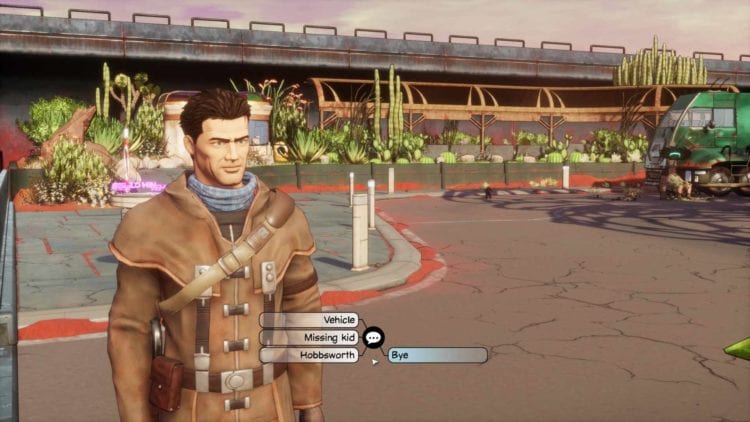 He went on to explain that Beyond a Steel Sky as a kind of interactive comic book with gameplay set up as a “virtual theater.” That means that all the NPCs, including animals, will walk around with their own motivations and go about their normal routine until the player steps in. Players can exploit these motivations in a variety of ways to solve puzzles and get what they need to move forward.

That might sound a lot like how open world role-playing games like The Outer Worlds work. But Cecil said that the main difference is that Beyond a Steel Sky won’t have a massive sprawling world to explore. Instead, players are generally tied to a comparatively smaller area. That doesn’t mean that the game will lack complexity. On the contrary, the puzzles, characters, and world are interconnected in fantastically intricate ways.

“This is an unabashed adventure game,” Cecil said while demonstrating the game.

There’s a lot of backstory involved with the first puzzle, which actually consists of several puzzles. In short, you need to catch a ride with a trucker to get past the front gates of Union City, but the trucker burned out his battery while waiting out a passing dust storm. The trucker passed the hard-to-replace battery on to a technician to repair, but you discover that the technician is actually a fraud who utterly destroyed it instead of fixing it. So, in the typical adventure game fashion, you have to get creative in finding him a replacement. 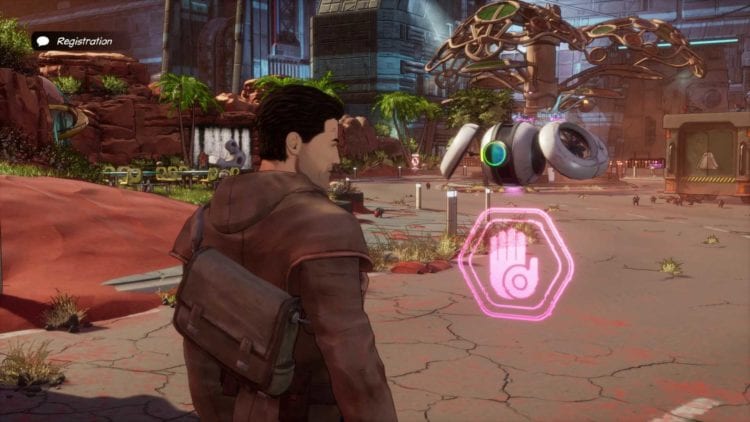 This includes manipulating scavenger birds called gang-gangs, particularly the “thieving gang-gang” to get a needed tool back. By solving a different puzzle earlier, players know that gang-gangs are greedy for food, aggressive, but can be scared off by loud noises. Armed with that knowledge, players have multiple solutions to this problem.

Approaching the bird directly causes it to fly away with the tool. So, Cecil had Foster pull some food from his bag, which caused the gang-gang to give up his ill-gotten loot and follow him around. It also ended up attracting a gaggle of gang-gangs, which followed him around as though he were the Pied Piper.

After picking up the tool, he explained that other solutions included throwing the sausage onto a cliffside, then summoning a hologram to scare it away. Yet another way solution includes throwing the food at an electrified fence. Suffice it to say, things don’t end well for the bird when this happens, but the player still gets the tool.

The point is, players aren’t forced into a solution that might feel nonsensical. They discover the rules that govern each NPC’s behavior and can employ multiple solutions to exploit them. As a result, solutions feel organic and somewhat open-ended.

Hacking will play heavily into Beyond a Steel Sky. The system is heavily inspired by the Scratch programming language, which uses a drag-and-drop interface to set actions in motion. 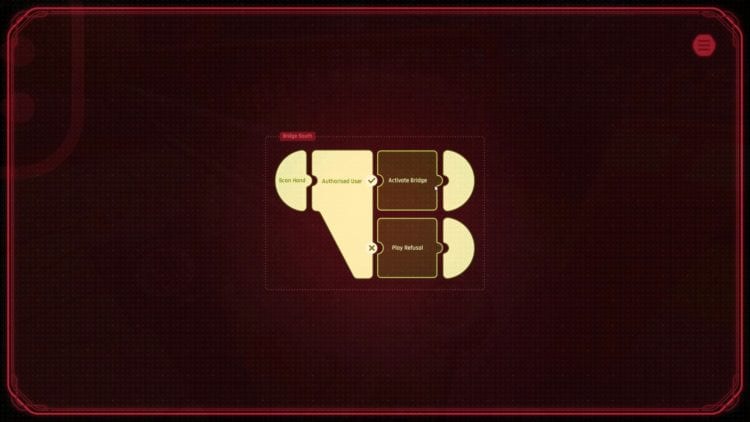 Cecil said that Foster’s hacking tools will grow as he progresses through the game, so it might be worthwhile to revisit areas to see what new hijinks they can pull off with machines.

In the demo, there is a tough old loader robot that just happens to use the unique battery the trucker needs. Experienced adventure game players will probably guess that Foster ends up mugging the robot.

The solution shown to me was to sabotage the factory’s machinery so that boxes come flying off the belt at breakneck velocity. The robot will come to investigate the problem, and a high-powered magnet will descend to trap it once it steps on the pressure plate. After that, it’s a simple matter of stealing the battery right out from the bot’s butt while it flails helplessly. 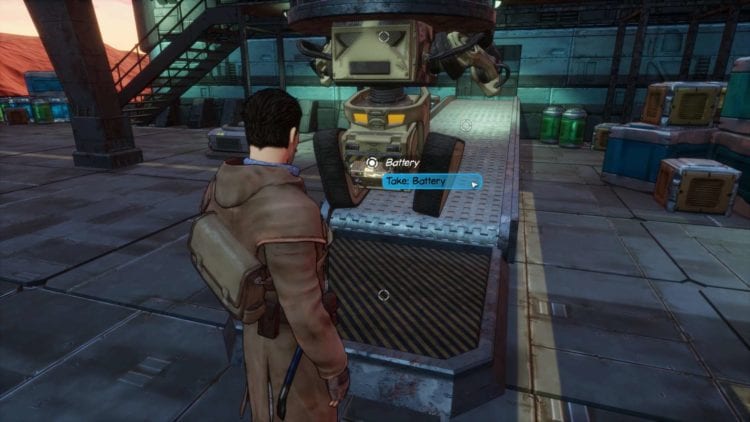 Then it’s on to the rest of Union City.

Beyond a Steel Sky currently has no release date, but the game is listed on Steam and is expected to launch in the early half of 2020 for PC, Apple Arcade, and consoles.

Shenmue III review — Not forkliftin’ around

By Andrew Farrell4 days ago
Interviews