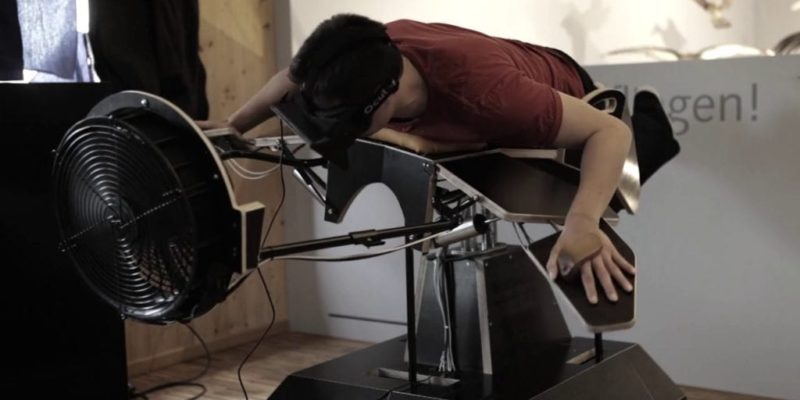 It looks like some sort of weird massage table but this contraption from Zurich University of the Arts brings the full bird experience to users with Birdly which also utlises an Oculus Rift.

We’ve seen some weird stuff with VR in recent months and some really useful implementations like the Norwegian tank demonstration a few days ago. This odd looking table with wings and a fan attempts to recreate the bird in flight experience by tracking both hand and arm movements which they say “directly correlates to the wings and the primary feathers of the bird”.

The user lies on the table, straps on an Oculus Rift and then soars above the landscape with the wind from the fan blowing across the body to recreate headwind. They say all these features  add “additional sonic, olfactoric and wind feedback”. In other words you’ll also smell the countryside as you soar high in the sky.

We have to hand it to them, it’s a novel idea and it’s probably as close as you’re going to get when it comes to the full bird experience. Now if only you could hook this up to a copy of Flappy Bird for the ultimate in frustration.

Driveclub has some suspicious provisions for Playstation Plus, fans react