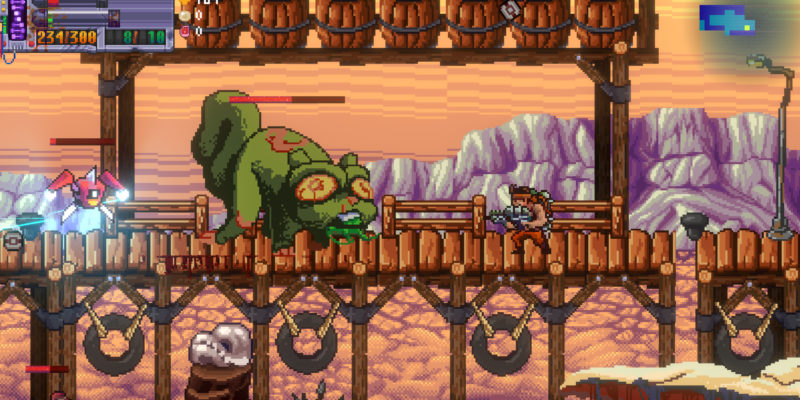 Run, gun, and eat. That’s life in the roguelite RPG shooter Bite the Bullet. You’ll battle hordes of enemies and eat everything from corpses to bullets to power up your character, weapons, and abilities. In the latest trailer for Bite the Bullet, Mad Cat Studios shows off the large arsenal of weapons you can wield in the game.

Bite the Bullet has a weapon for every occasion. Shotguns to deal with enemies getting in your face. A rocket launcher for high-health baddies. A flamethrower for when you’re tired of being precise and just want to burn everything. And the weird and wonderful critter cannon for maximum enjoyment all the time. There’s a bunch more that you can see in action in the weapons trailer.

Every weapon in Bite the Bullet has a secondary fire, which gives them all a fair amount of versatility. And all the weapons can be upgraded by eating spoiled enemies. Those are enemies with green fumes around them.

At first glance, Bite the Bullet looks just like any other run-and-gun platformer. But the “eating everything in sight” feature gives it some interesting mechanics that set it apart from similar titles. For instance: Your character will get fat if you eat too much without running. And being fat will greatly limit your mobility. Alternatively, if you don’t eat enough your attacks will become weaker.

Combine that with the RPG elements in the game and Bite the Bullet looks like it’s going to have a surprising amount of depth. There are four classes for players to choose from: Carnivore, Herbivore, Omnivore, and (you guessed it) Robovore. Each class has unique abilities and perks, and you can customize your character further with the skill tree. Each enemy has its own nutritional information, and your body type (which is your class) will change based on the types of enemies you consume.

If you would like to see more of Bite the Bullet, including eating enemies and Zombro mode, you can check out the previous video released by Mega Cat Studios. Bite the Bullet will be available in the Steam store in early 2020, but for now, you can add it to your wishlist.