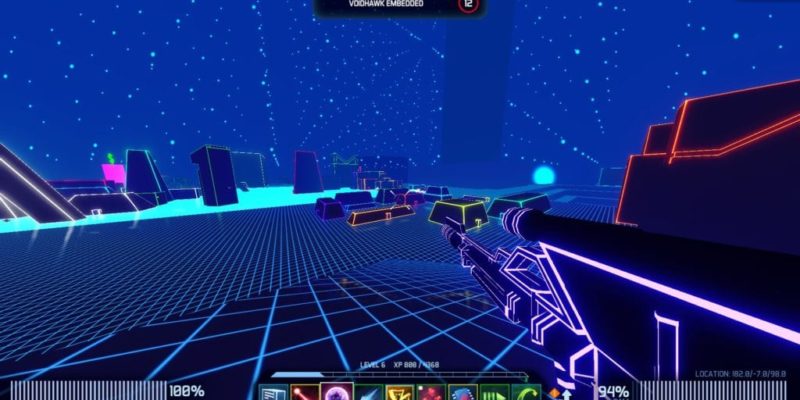 Some people are hesitant when it comes to purchasing early access games. Things happen in life and projects get abandoned. Early access games typically have price tags on them, but they’re still very much in development, so any number of things could make it so that they never see completion. Black Ice has been in EA since July of 2014 and is headed up by a single developer. It has recently entered its sixth year and, despite the length of time, is still going strong. So, if you haven’t heard of it, what is Black Ice and why should you care?

Black Ice is a first-person shooter set in a Tron-like digital space based around the concept of hacking corporate servers. The basic gist is that you have a hacking program attached to your mouse’s right-click, and you simply use it when facing a building while its info is displayed on screen. This starts a countdown and enemies start pouring in. When the countdown stops, you then have to clear out the remaining enemies, which will complete the hack and reward you with experience and a single piece of loot.

The game begins by placing you in a contained tutorial area that simply tasks you with hacking a few of the many servers located therein. Servers all look like buildings, with sprawling neon structures in the distance. There’s even a humorous sidequest in this area. You get emailed by a company that makes an electronic pillow who wants you to prank a rival company. Each time you hack the other company’s server, that company then tasks you with hitting the other company back. This devolves into a hilarious back-and-forth between the two. By the time I left the tutorial area, I had hacked each and every server in it. But the real fun was yet to come. 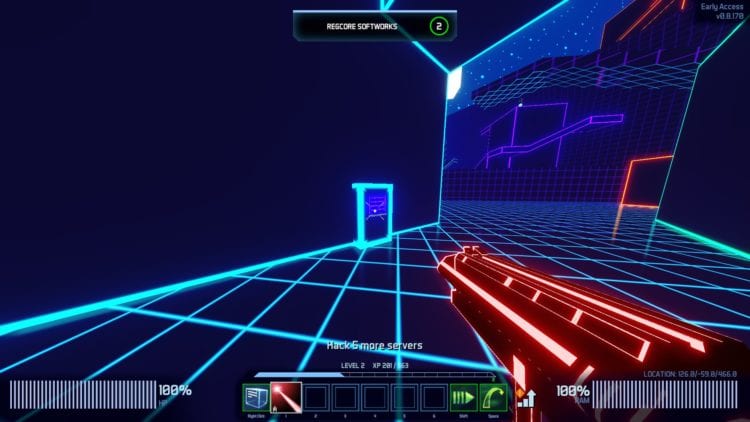 After stepping out of the tutorial area, you’re greeted with the full scale of Black Ice‘s world. And it’s massive. It’s a digital city with servers shooting up to the sky as far as the eye can see. You can walk wherever you want, but you probably won’t be able to successfully hack the vast majority of the servers, as the game is built around leveling and gear. That’s right — it’s an open-world looter shooter based around hacking.

Every time you defeat an enemy or complete a hack, you get experience. Each time you level up, you get a stat point that you can use to increase your health, damage, and various other parameters. And every ten levels also nets you a special perk. But at this stage, there’s no story guiding you outside of the initial emails you receive during the tutorial. The digital world is your oyster.

The way progression works is extremely simple but completely effective. You need to travel the city, starting with the low-level servers and slowly but surely working your way up to higher-level ones. Your goal is simply to get stronger and keep getting better equipment. And if you like gear, oh boy, there’s so much of it. 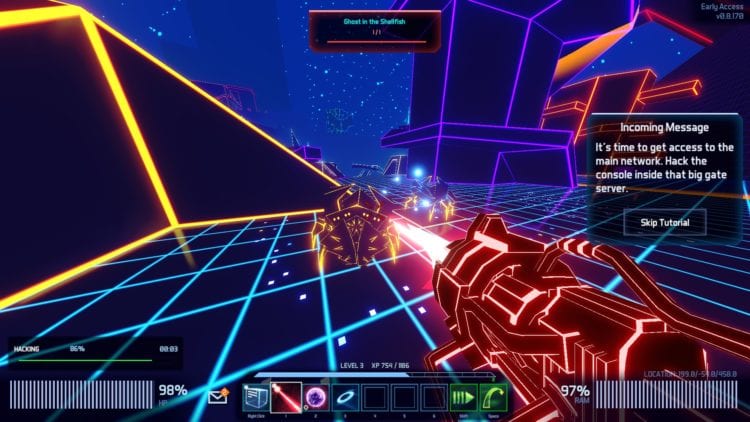 There are multiple types of gear in Black Ice. You’ve got your hacking tool, a variety of different weapon types, summonable programs that fight with you, passive accessories, and gear that affects your jump and sprint. And it uses a Diablo-style system where each piece of gear has rarity, with rarer gear being stronger and having more bonuses. And you get an absolute flood of gear. But your inventory space is limited.

However, there are shops littered throughout the game world. You can spot these via the dollar signs higher up on their buildings. The game has a very wide draw distance and things stand out from the background very well, so it’s easy to see these. You’ll need to make frequent trips to shops to sell your stuff, which gains you credits that you can use to buy even better stuff. You can hold a fairly decent amount of things in your inventory, though, so this doesn’t feel like a chore.

All of this would fall apart if the gameplay weren’t up to snuff, but Black Ice is an excellent shooter. The different weapons all feel great, and the aiming is accurate. You’ll generally be constantly on the move against your enemies, circle-strafing and firing endlessly. The game handles ammo via your RAM, which depletes with use. But no matter how long I shot, I never ran out of this — which is good, because you just don’t want to stop shooting. 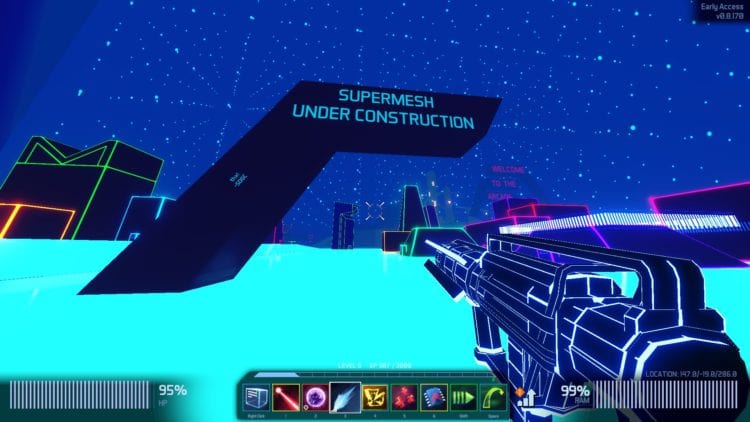 The machine guns are probably my favorites, but the lasers are extremely useful too. The enemies fall apart in satisfying ways once you dispatch them, which is really awesome after you’ve spent minutes moving and shooting with absolutely no breather. Thankfully, there are healing items you can use in case you get low on health. And if you keep trying servers that are higher-leveled than you, you’re going to need to do that.

Easy on the eyes

Black Ice is a unique, awesome-looking game. The use of color and the cyber world aesthetic are immersive and engrossing. But when I say the game is easy on the eyes, I mean it. It has options to make the game more tolerable to photosensitive people or anyone who just doesn’t want things rapidly flashing in their eyes at all times. The graphics menu comes with both a mode for photosensitive people and one that reduces the intensity of the particle effects.

The photosensitive mode reduces the overall contrast in a non-detrimental way. The low particle mode even changes the muzzle flashes and all explosions and effects to be less problematic for photosensitive players. I wish every FPS had options like these. And Black Ice isn’t especially bad on this front in the first place. Even with the photosensitive mode turned off and full particles on, the game doesn’t have any interest in blinding you or distracting you from the general gameplay. 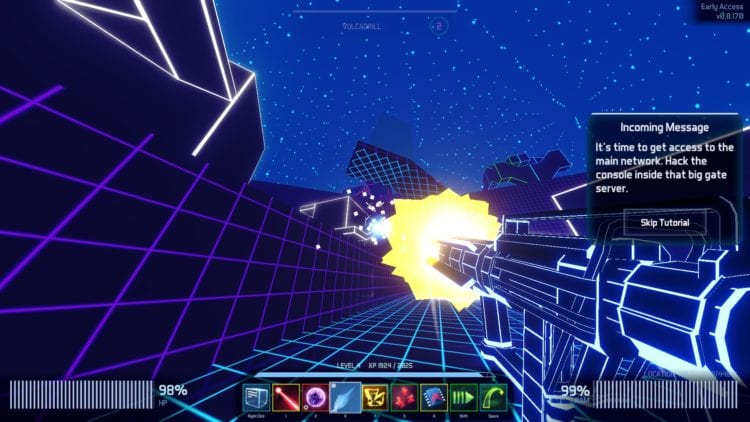 Still very much worth it

So, as it enters its sixth year of development, it’s easy to see that Black Ice is still being developed and very much worth playing. The dev has added more areas to the game, as well as a bounty system that gives players daily quests to complete. Doing so will reward players with some sweet loot. In the future, there are going to be more and more quests added, which are being handled by the developer’s writing partner. If the initial sidequest with the pillow companies is any indication, these will be well worth seeing. I’m excited to see how the game progresses and develops over time. It’s very clearly a labor of love and, despite its simplicity, is just as much fun, if not more, than the many loot shooters available today.