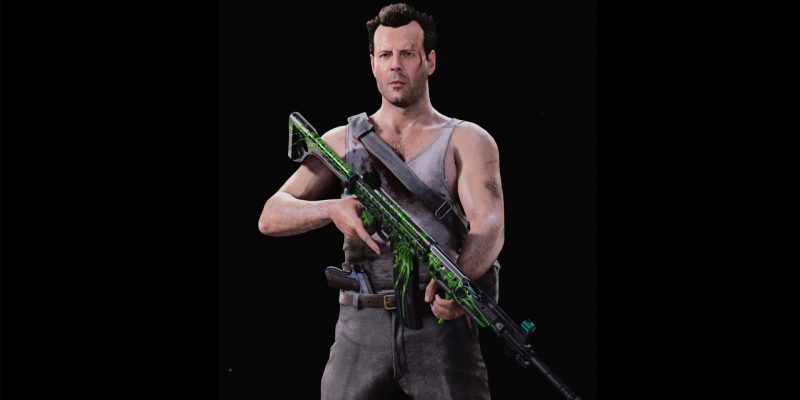 Call of Duty: Black Ops Cold War and Warzone Season Three included the additions of ’80s action heroes to the franchise. This allowed players to hop into matches as John Rambo and John McClane. The crossover was further hyped up when Nakatomi Plaza became a location in Warzone. As Season Four for Call of Duty is just around the corner, the ’80s action heroes are almost ready to depart from the store. Although the bundles have been in the store for almost a month, players are still discovering secrets like the John McClane MP5 Easter egg in Black Ops Cold War.

There’s a reason why many players may have not noticed the Easter egg until now. This is because the Redditor discovered that the text can only be seen when certain camos are equipped to the gun. It has been noted that the text does not appear when using more prestigious camos such as gold and diamond. If you want the movie reference on your gun, you may have to play around with the camos.

If you want to play as John McClane, the Die Hard bundle is available to purchase until June 18. The John McClane Easter egg is definitely an innovative addition to Call of Duty. The developers do not shy away from adding Easter eggs to the game on both large and small scales. According to recent leaks, the Zombies Outbreak mode will get a second Easter egg in Season Four.

I discovered an ACTUAL hidden secret on the John McClane MP5!! Can only be seen once you apply certain camos. Doesn’t appear on gold diamond etc. from blackopscoldwar