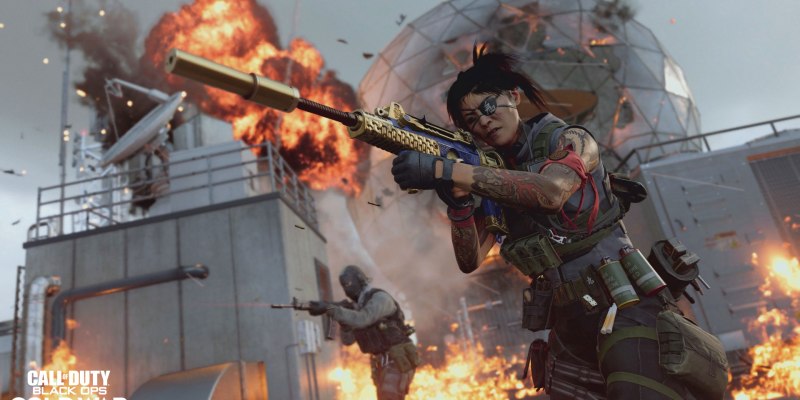 Currently, Activision Blizzard is facing a lawsuit for harassment and discrimination. It is still ongoing and since the concerning lawsuit began, employees took part in a staged walk out and some senior studio members have left. Following this, Black Ops Cold War fans have noticed a change that has been made to the Season Five Scope it Out calling card, an in-game customization option. Although it is not confirmed, fans believe that the calling card has been tweaked because of the ongoing lawsuit.

Call of Duty: Black Ops Cold War Season Five rolled out an array of new content across all game modes. Like all seasons, season 5 of Black Ops Cold War introduced a new set of challenges associated with leveling up. Completing these challenges will allow you to rack up XP, while unlocking calling cards for you to show off.

A Black Ops Cold War player posted an image of the original Scope it Out calling card on Reddit. It became a popular discussion point and the moderators of the subreddit locked the thread. As you can see, the original design of the calling card consists of two men and a woman. The men are dressed in business attire and stood around a water cooler. A female is captured with her back to the men who appear to be staring at her, or ‘scoping her out.’

Since the post was shared on Reddit, the developer has silently adjusted the calling card. Although the design remains largely the same, the woman has been completely removed from the Scope it Out calling card. The decision to change the card has divided the community. However, the majority of commenters appear to support the decision. Even so, the fact that this calling card existed in the first place, with the name attached to it, remains concerning.

For those that didn’t realize, the "Scope It Out" calling card has been quietly changed from blackopscoldwar

Pathfinder: Wrath of the Righteous — Heart of Mystery puzzle guide