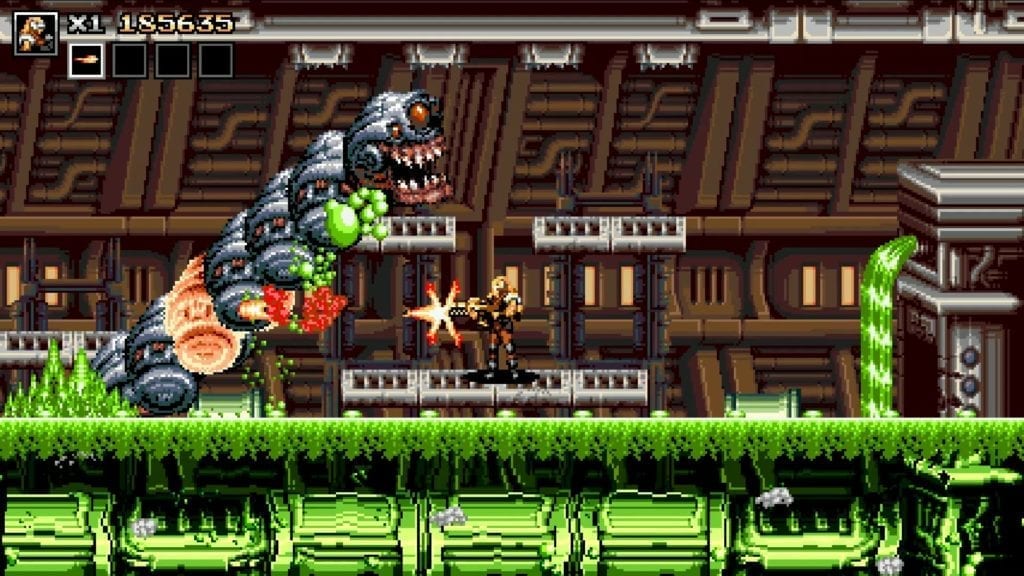 It isn’t difficult to figure out where Blazing Chrome took its influence. Even a cursory glance at a screenshot or snippet of gameplay footage unearths fond memories of Konami’s classic shooters. Without argument, Blazing Chrome is a joyous ode to Contra and other run-and-gun, one-shot-and-you’re-dead games that thrilled and angered many like me in our youth. The game follows the memorable formula to a science, from its faithful and attractive 16-bit pixelated art style to its grotesque boss fights and grueling difficulty. Indeed, it’s a simple formula, but one that can be easily messed up without the right balance. Though the game lacks some fine-tuning, the developer was studious in its endeavor; the game kicks ass — even as it’s aggressively kicking yours. 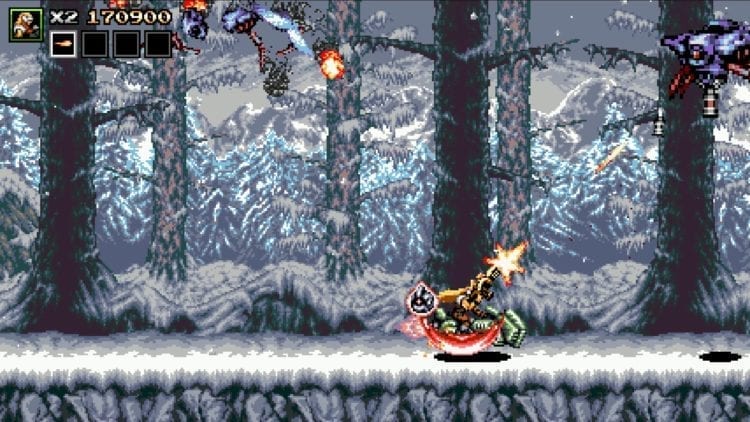 The year is AD 21XX, and the world has seen better days. Decades prior, humanity was pushed to the brink of destruction as the planet was ravaged by hordes of militant robots — or “toasters,” as they’re called in the game. Now, it’s up to you and a ragtag group of soldiers to strike the enemy plant that provides power to the machine overlords. You can play as one of two starting characters: Mavra, who leads her group against the machines, or Doyle, a reprogrammed toaster now fighting for humanity.

Both characters play the same, so if you decide to pair up with a friend in the local co-op mode, there shouldn’t be any arguments. You run, jump, crouch, and hop over platforms in six different levels as enemies come at you from all sides. Thankfully, Blazing Chrome adds two other moves not seen in many of its forefathers. You can quickly roll away from oncoming bullets or swiping metallic talons. There’s also a melee attack if any toasters get too close for comfort. On top of those additions, there are vehicle-riding sections, as well as mech suits to pilot. Bonus points if you kill a boss in a mech suit — no, really, there’s an achievement for that. 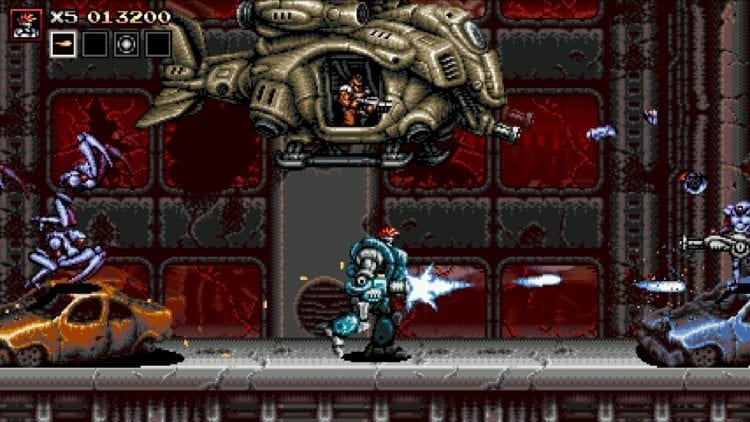 Put a “metal slug” in those robot domes.

As I mentioned, other than the clear aesthetic differences, Mavra and Doyle are the same, and that includes their weaponry. You naturally start with the trusty machine gun, which can fire vertically, horizontally, or at an angle. Three other weapons come available from drop pods that can either drop an additional gun or allow you to choose by cycling through a list. The other guns include a laser that can be charged up to unleash a devastating beam, a grenade launcher, and a pink plasma whip — all of which you can cycle through with a press of a button. The system is very much like the one in Contra: Hard Corps. Except that game was far more varied with its characters, with each one equipped with their own unique weapons, but I digress.

In addition to the weapons, there are also bots that can help you on your mission. The defense bot grants you two additional hit points, which definitely comes in handy. There’s also a bot that fires a machine gun in the direction you’re facing. The third bot boosts your movement speed and gives you a double jump. Naturally, you lose your helper buddies the moment you die. 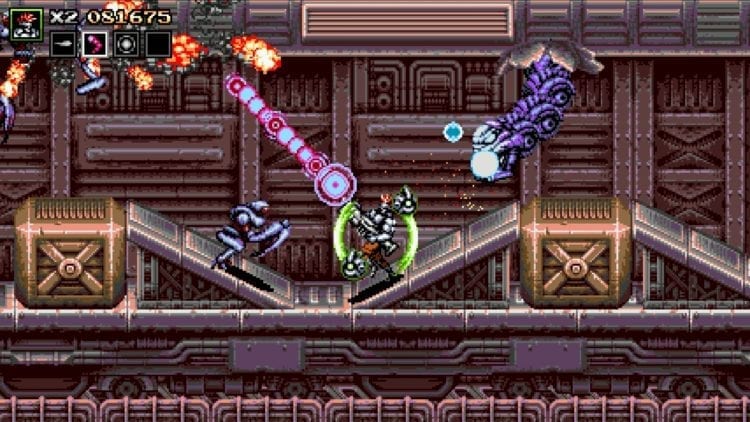 The defense bot is your friend when you’re surrounded by toasters, robot worms, and other nasty baddies.

There is a challenge that comes with wielding one of the more powerful guns. Like in Contra, if you die with one of the additional weapons in hand, you lose it until another opportunity to acquire it again comes along. Naturally, you’ll need to ask yourself if it’s worth shredding enemies quickly at the risk of losing the gun, or preserving its power for the eventual mini-boss or end boss fight. Personally, I didn’t mind losing the extra weapons, so long as I kept the grenade launcher in my back pocket.

Without question, the grenade launcher is easily my favorite weapon among the three. The grenades can bounce along the floor or off walls, and its splash damage is immense. Larger enemies and bosses with multiple weak spots crumple before the might of the grenade launcher. It always saddened me when I lost it due to my unfortunate demise, but that’s what happens when death comes at you from all angles. 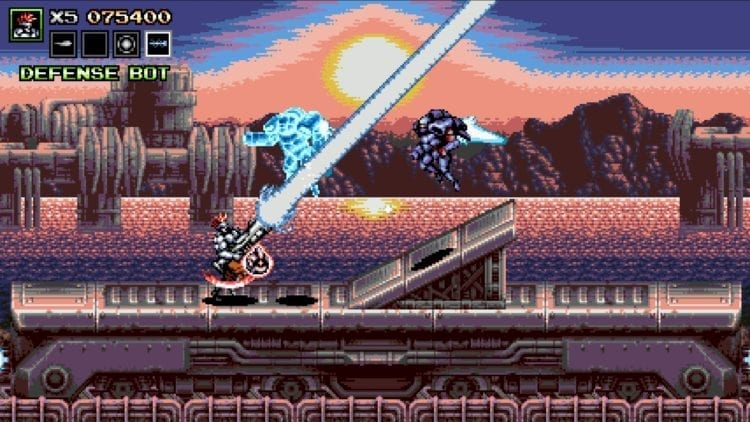 Yes, much like its patriarchs, Blazing Chrome is designed to kill you. A lot. The game is impressively difficult, throwing dozens of bullets and flinging taloned, quick-footed robots your way at every moment. Even with my own “gamer pride” at stake I still danced with the reaper more than a dozen times per mission. I ran out of ways to cleverly string together the F-word with every sentence I hurled at the ceiling — much to the chagrin of my neighbors. However, as hard as the game is, it isn’t so challenging that it feels unfair. Every death I gritted my teeth through was by no one else’s fault but my own, either from mistiming my jumps or not keeping an eye on my surroundings.

However, Blazing Chrome isn’t quite as hardcore as Hard Corps. It offers plenty of lives at your disposal as well as checkpoints (no more clunky password screens!). There are three difficulties ranged from easy to hard, the latter of which only unlocks after completing normal mode. The differences I noticed were the amount of lives on offer, as well as changes to the bosses’ attack patterns.

Various enemy types offer their own challenge. You are faced with gun-toting robots, as well as flying and melee-focused foes. It’s not just robots you tackle, however. There are also giant, mutant insects that join the fray, such as flying bugs, venom-belching sand worms, and an enormous spider boss that flings sticky webbing your way. 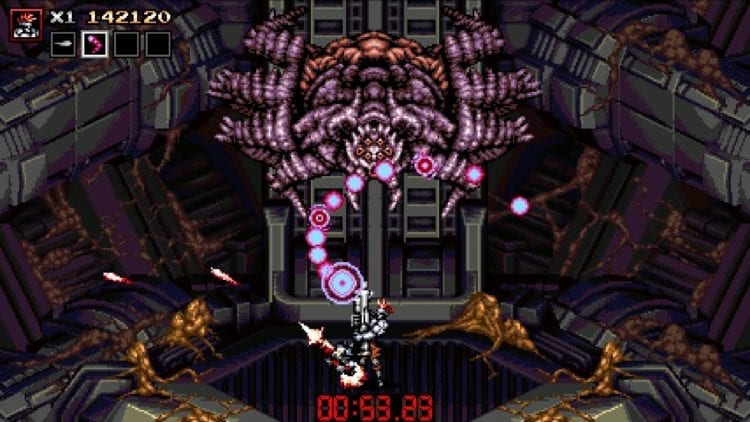 This won’t be an easy fight, especially if you’re not a fan of giant arachnids.

Despite the difficulty, Blazing Chrome is electrifying and a whole lot of fun to play alone or with a friend. Even as I died for the umpteenth time against a particularly tough boss (while throwing out a few more colorful expletives for good measure), I still eagerly dove back in for another go. It may be the masochist in me, of course. In reality, Blazing Chrome is an enthralling time, and the challenge is just right, keeping you engaged enough to push back at it time and again. It is on the short side, coming in at around a couple hours, which should only change depending on what difficulty you prefer.

However, there’s a lot of replayability in store. After completing the game you unlock two additional characters: Raijin and Suhaila. Both are melee-only classes (with the former being an actual ninja), armed with close-range attacks that can be charged for a devastating attack that goes across the screen. Completing the game also unlocks a boss rush and mirror mode.

As previously mentioned, Blazing Chrome does lack some polish. The hit boxes in particular seem a little dubious. More than once I could swear I had a buffer zone of several pixels between an enemy and me, but it still counted as damage. The wonky hit boxes also botch the melee attack. More than once, I hit the melee button near an enemy only to see my character fire, causing me to die. Oddly enough, you can also melee attack enemies that still seem too far away for your rifle butt to reach. It’s not a deal breaker in my mind, but it does add a sense of unreliability to the mix, which can be frustrating. 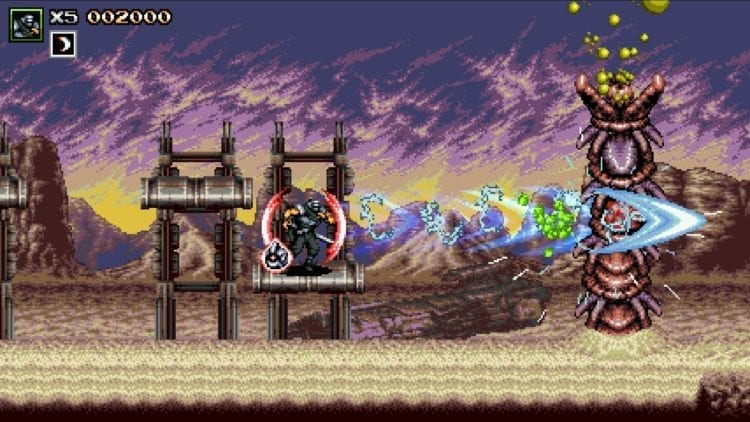 The charged attack of the melee-focused characters is staggeringly powerful.

Despite the minor issues, Blazing Chrome is still a great time. Blazing Chrome feels like it’s made for old fogies like me who are fans of run-and-gun games. Of course, it’s certainly engrossing enough and offers plenty of enjoyment for newcomers alike. So, what are you waiting for? Remorseless robots and vicious vermin have taken over — grab a friend and reclaim the planet.

A frantic co-op shooter in the same vein as Contra, Blazing Chrome is an electrified, 16-bit inspired run-and-gun game that will keep your trigger finger numb and your profanities loud.

Contest: Both mice and men can enjoy a free copy of Moss