There’s one Overwatch character pose that has not gone down well with one fan, it’s an over the shoulder pose from the game’s character Tracer and it’s now being removed.

Blizzard has actually listened to one of its game communities for once, well they have listened to one individual’s complaint at least. Each of the characters on Overwatch has different poses and a poster on the official forums called Fipps has taken offence to a pose from the female character called Tracer. The comment reads:

“WHAT? What about this pose has anything to do with the character you’re building in tracer? It’s not fun, its not silly, it has nothing to do with being a fast elite killer. It just reduces tracer to another bland female sex symbol.

“We aren’t looking at a Widowmaker pose here, this isn’t a character who is in part defined by flaunting her sexuality. This pose says to the player base, oh we’ve got all these cool diverse characters, but at any moment we are willing to reduce them to sex symbols to help boost our investment game.

“I have a young daughter that everyday when I wake up wants to watch the recall trailer again. She knows who tracer is, and as she grows up, she can grow up alongside these characters.”

“My main complaint is that there is no facet of tracer’s silly/spunky/kind personality in the pose. It’s just a generic butt shot. I don’t see how that’s positive for the game. If you look at DVA’s laying around pose, it’s got some sexual undertones as well, but it at least still preserves some of her existing characterization.”

Looking through numerous character poses, male, female or even animal, they are all quite similar and portrayed in a cartoon style as you would expect in a game such as Overwatch. However, Blizzard has read this complaint and decided they need to take action. Blizzard’s Jeff Kaplan wrote in response:

“We’ll replace the pose. We want *everyone* to feel strong and heroic in our community. The last thing we want to do is make someone feel uncomfortable, under-appreciated or misrepresented.

“Apologies and we’ll continue to try to do better.”

“While I stand by my previous comment, I realize I should have been more clear. As the game director, I have final creative say over what does or does not go into the game. With this particular decision, it was an easy one to make—not just for me, but for the art team as well. We actually already have an alternate pose that we love and we feel speaks more to the character of Tracer. We weren’t entirely happy with the original pose, it was always one that we wrestled with creatively. That the pose had been called into question from an appropriateness standpoint by players in our community did help influence our decision—getting that kind of feedback is part of the reason we’re holding a closed beta test—but it wasn’t the only factor. We made the decision to go with a different pose in part because we shared some of the same concerns, but also because we wanted to create something better.

“We wouldn’t do anything to sacrifice our creative vision for Overwatch, and we’re not going to remove something solely because someone may take issue with it. Our goal isn’t to water down or homogenize the world, or the diverse cast of heroes we’ve built within it. We have poured so much of our heart and souls into this game that it would be a travesty for us to do so.

“We understand that not everyone will agree with our decision, and that’s okay. That’s what these kinds of public tests are for. This wasn’t pandering or caving, though. This was the right call from our perspective, and we think the game will be just as fun the next time you play it.

“If it isn’t, feel free to continue sharing your concerns, thoughts, and feedback about this and other issues you may have with the game, please just keep the discussion respectful”

The grievance is a little perplexing when you compare the poses of one of the other another female character Widowmaker and then the offending Tracer pose. You can see how similar they are in the image below and all the animations for both characters can be seen in the videos below.

The complaint seems to be about how the pose doesn’t fit her character which is probably why Blizzard has decided to pull the plug on it. Then again, how many Overwatch players are really going to care about their character’s history and profile. It’s a team-based shooter after all and not a game full of narrative. 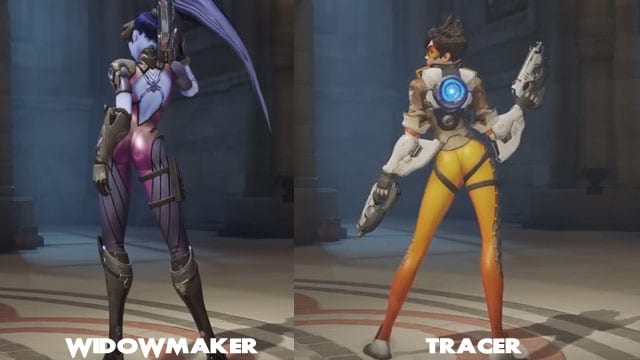 Is Everybody’s Gone To The Rapture Coming to PC?