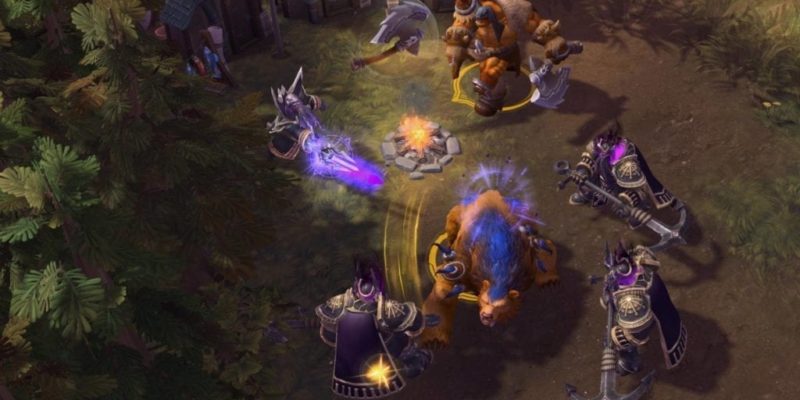 Heroes of the Storm is getting bigger and bigger, with three more heroes and a new battleground revealed.

The Eternal Conflict pseudo-expansion continues with some details on Kharazim the Monk, and the Infernal Shrines Battleground. That said, those thinking that Eternal Conflict meant we’d only be seeing Diablo-themed stuff for the foreseeable future might well be pleased to hear that Warcraft‘s Rexxar and StarCraft‘s Artanis have also been announced as forthcoming Heroes.

Kharazim is Diablo‘s first support Hero, and he’s got a couple of interesting twists. He’s melee-focused, but he can specialise in different paths by choosing one of three traits via his talents: Iron Fists for bonus attack damage, Transcendence for self-heals through melee combat, or Insight for mana restoration and a bit of a balance between offense and defense.

Infernal Shrines is a three-lane Diablo-themed map, using the same heaven/hell tileset as the previous one. This map contains three shrines that periodically gather power; when powered up, teams can activate shrines and defeat their guardians in order to summon a Punisher. Punishers are powerful boss monsters that push down lanes and hunt nearby enemy heroes, and they spawn with one of three affixes that Diablo fans will know all too well: Frozen, Arcane, or Mortar.

In “not Eternal Conflict” news, Warcraft‘s beastmaster Rexxar has been announced as a forthcoming Hero. Rexxar is a ranged warrior who’ll head into battle alongside his bear, Misha, who can harass enemies, take damage, and stun foes with a targeted charge.

Finally, Protoss leader Artanis has been revealed as another future Hero. He’s a melee warrior, and that’s basically all I know about him. Hooray!

We’ll apparently be hearing more about all of this new Heroes of the Storm content during Blizzard’s Gamescom livestream on Friday. For now, you can see a couple of new videos and a load of new screenshots below.