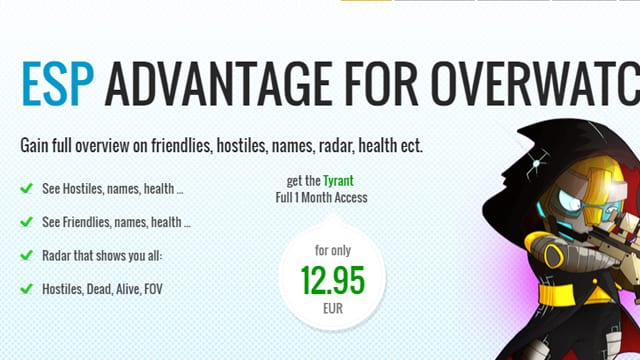 Blizzard has kicked their legal team into action and is suing the creator of an Overwatch cheat program called Watchover Tyrant.

A lawsuit has been filed against the German company Bossland GMBH in the Central District Court of California. The Overwatch cheat program cost 12.95 EUR and has also been resold in China for an inflated price.

Blizzard is claiming for “copyright infringement and violation of the DMCA”, specifically in the US.

This is by no means the first time Bossland has been fighting in the courts with Blizzard, they have been serial offenders for World of Warcraft, Diablo 3,  and Heroes of the Storm.

This latest program, Watchover Tyrant, allows Overwatch players to see locations of enemy and their distance away, and the health of enemy players. It also comes with numerous subscription tiers to encourage players to keep using it.

Bossland CEO Zwetan Letschew told TorrentFreak that there were “10 ongoing legal battles in Germany already”, and found it “strange” that Blizzard has decided to take it to the US courts “after all these years” referring to Blizzard’s previous court cases in Germany. He goes on to say that they are not concerned as a US filing will have no impact on the German company.

Blizzard has obviously been struggling to deal with Bossland in the courts after a case raised by Blizzard over their Stormbuddy cheat was rejected by the German courts.