Blizzard’s Overwatch reveal was a bit of a surprise for most of the attendees at Blizzcon 2014, despite the trademark having been filed back in April. Overwatch is also a departure from what we’re used to seeing from the creative talents at Blizzard. The closest they’ve come to making shooter in the past was the canned StarCraft: Ghost, which actually looked pretty good at the time.

Overwatch is taking the team-based shooter concept and adding Blizzard’s unique style to the proceedings, with a roster of new heroes who (in rather MOBA-ish fashion) each have their own special skills. It’s worth noting that this really does tip more than its hat to Team Fortress 2. Which is already a game that knows plenty about hats. 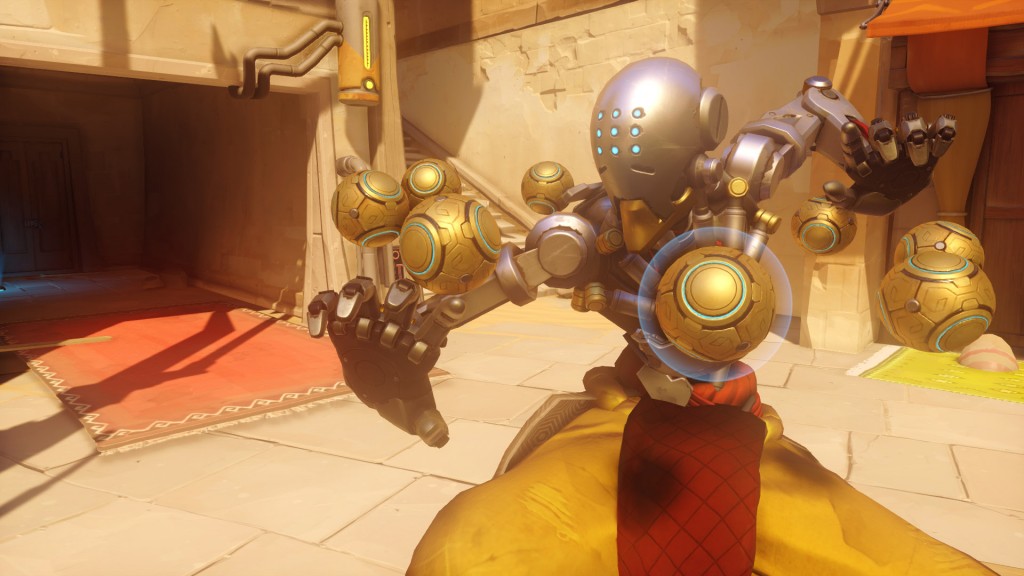 This guy, for example, clearly needs a nifty robot hat.

Despite being a team-based shooter, the game does actually have a bit of a story as well. It’s set on Earth, 60 years in the future, after a global crisis. A team of soldiers, scientists, adventurers, and oddities called Overwatch was brought together to restore peace, but, despite being an organisation that supposedly represented herosim and sacrifice, it started to fall apart and disbanded.

Unsurprisingly, this is a game all about the heroes and their powers. But it’s not going to be a case of run a few meters, get shot and die like other rapid-paced titles in this genre. Blizzard apparently want to keep players in the action for longer periods, more so than other team-based shooters, so players can explore the potential of their skills.

So far, only two game modes have been revealed: Payload and Capture Points. The standard deathmatch mode doesn’t seem to be there, which is a notable omission for a shooter.

Mind you, the included game modes are nothing ground breaking. In fact I’m a little surprised at the lack of imagination; but Blizzard are placing a very high emphasis on the characters (rather than objectives) making the game fun. Perhaps they feel the actual modes are less important than character design, but this approach could see Overwatch ending up like yet another run of the mill shooter; and it does have the rather popular TF2 to contend with in the character department.

Not that Blizzard games tend to hurt for popularity. 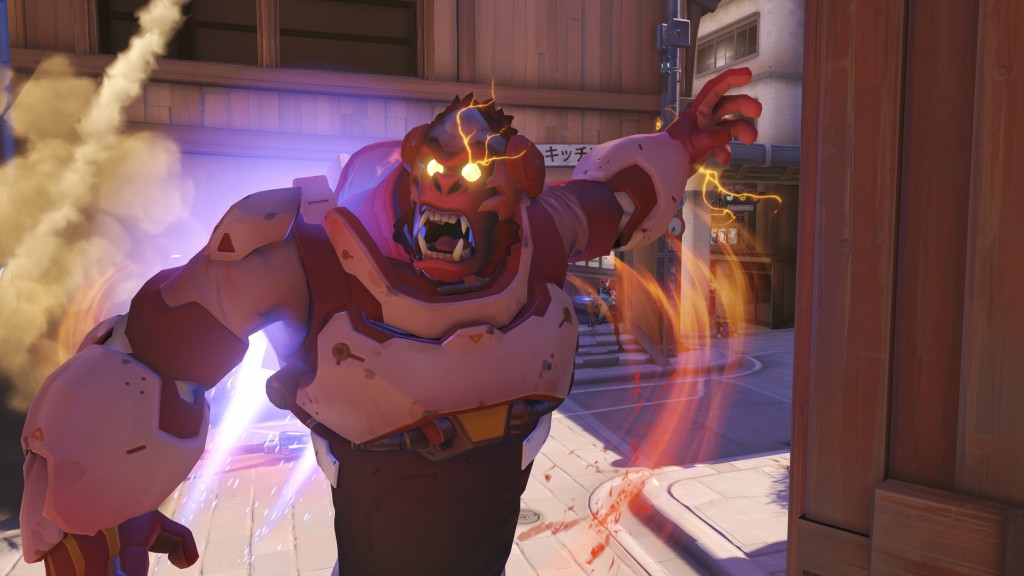 Since this is a Blizzard title, player numbers are unlikely to be a monkey on the game’s back.

Overwatch will likely feature many maps in the future, but Blizzard was only willing to share three for the reveal. The Temple of Anubis, which is situated a the base of a technological pyramid on the Giza plateau; packed full of Egyptian themes and structure. Hanamura, meanwhile, is the home of the hero Hanza and takes players into a Japanese temple complex in the north of the map. The final map is King’s Row, which is the more typical western urban city street setting. The levels look great, and like the characters are highly stylised. That cartoony appearance won’t be everyone’s cup of tea but, to mention that game again, a similar art style hasn’t done Team Fortress 2 any harm.

Blizzard are known for their storytelling but as this is a multiplayer shooter it doesn’t exactly lend itself to in-depth, in-game story and lore. Much of that will have to come from the characters themselves, or from sources outside of the game. Blizzard’s Chris Metzen pointed out that the company have “plans” but they’re “not ready to talk about them yet.”

There’s a heavy focus on the characters and their abilities, and Blizzard hasn’t been able to resist adding four classes, or roles, into the mix (again, all very MOBA-ish.) The Offensive role will be useful for scouting, high damage and pushing objectives (Pharah, Reaper, Tracer, Hanzo), Defensive characters will guard and establish a frontline (Widowmaker, Bastion, Torbjorn), Tanks will push into battle with higher HP and armour for high survivability (Reinhardt, Winston), and finally Support roles will handle the usual utility, healing and buffing duties (Zenyatta, Mercy, Symmetra.) Any gamer should be able to slip into these roles with ease.

Blizzard say they want players to experiment with the characters, so when players die they can switch heroes and then jump back into the fray. With matches set at 6v6 it will also give players more time to actually stay alive. 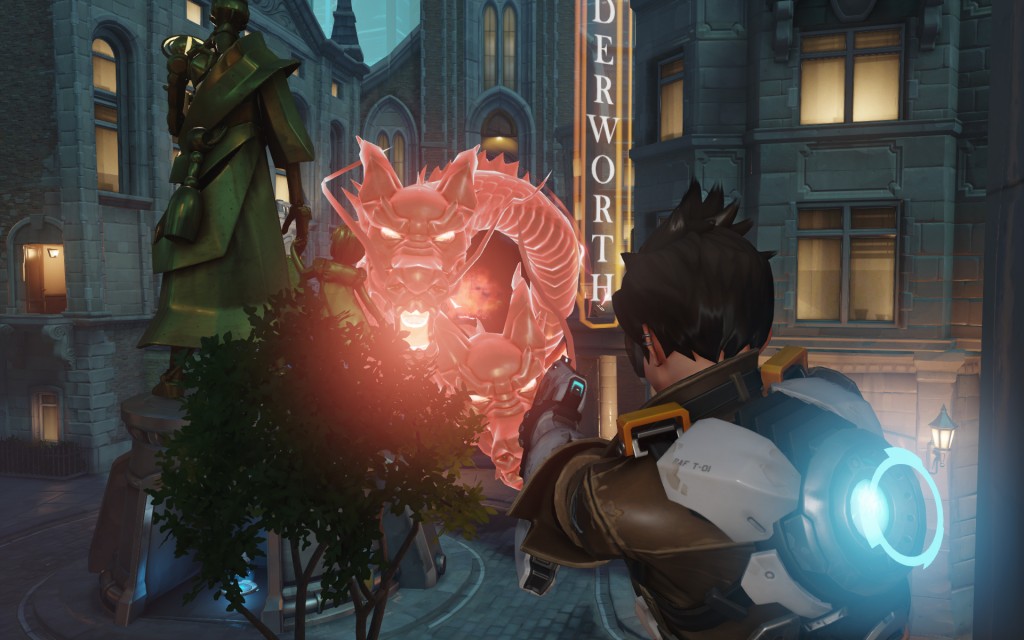 I don’t know how effective conventional weaponry really is against spirit dragons.

The big question is, of course, what’s the business model? Will it be free to play? A one time purchase? This is something Blizzard are keeping tight lipped about for now but we wouldn’t be at all surprised if this ended up F2P with paid transactions for either cosmetic items or additional characters. Then again, Blizzard often tend to take an unconventional route to market and may surprise everyone by making it a full priced game.

There has been some speculation that Overwatch is a scaled down revamped version of Project Titan but according to Blizzard that’s not the case. They do admit there are elements of Titan to be found in Overwatch though. Some “shared ideas,” in their words.

Overwatch looks moderately interesting, but I have to say it’s not looking at all ground breaking which is slightly disappointing considering this is a new Blizzard title and franchise. There are already plenty of great team-based shooters either released or coming in the near future, so whether Blizzard manages to make Overwatch a smash hit will largely depend on how it’s embraced by it’s own community which is perhaps more used to aRPGS, MMOs and traditional RTS titles.

By Steve Clist7 hours ago
Features