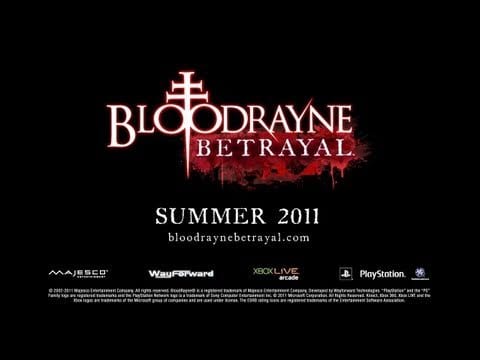 And now for #34 in the list of games I didn’t realise were coming to Steam at any point: BloodRayne Betrayal. The 2D hack n slash return of a videogame series last seen fighting Nazis (which is a decent thing for anybody to be doing, really,) popped up on consoles way back in 2011. Three years later, here it is on Steam.

Since I didn’t play it at the time, I’ve no idea whether it’s any good or not. The critical reception from the console release isn’t helping much either, because reviewers seem to either have loved or utterly despised it. Still, that’s a 50-50 chance of having a reasonable time, I suppose.

Abstraction Games’ take on the BloodRayne series is a 2D Castlevania(ish) one, in which Rayne is embarking on ONE LAST MISSION for the vampire hunting Brimstone Society. Rather than Nazis, it seems she’s taking out fellow vampires this time. Or “vampire scum,” as the Steam blurb would have it.

You can look forward to blood feeding, minor puzzling and Rayne’s signature (and probably quite dangerous) arm blade weapons. That’s what it says in this Steam description anyway, which in all honesty is about all I have to go on here. Given the name, I guess you might get betrayed at some point. Unless that’s your betrayal of other vampires. I don’t know. Sorry.

Wait, look, here’s a trailer from three years ago! That’ll explain everything, I’m sure.

Outlast: Whistleblower DLC coming in May, promises a Waylon of a time