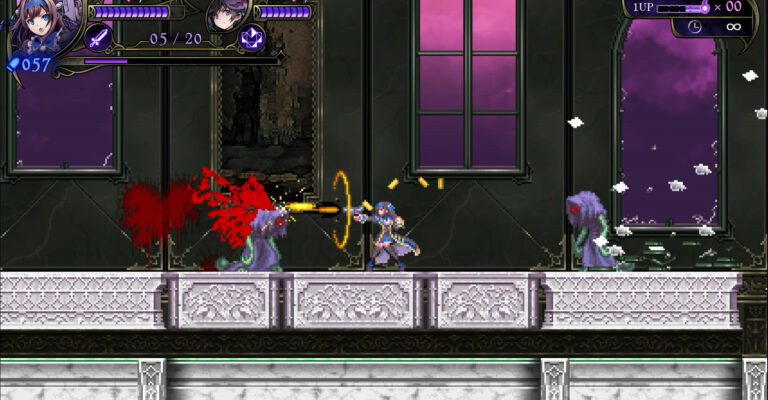 A year before the Symphony of the Night-inspired Bloodstained: Ritual of the Night came out, a companion game by the name of Bloodstained: Curse of the Moon made its way to PC. Developer ArtPlay handled the creation of Ritual of the Night, However, it was Inti Creates in charge of Curse of the Moon, which harkens back to the classic Castlevania style rather than the more exploratory approach of Symphony of the Night. The game did well enough to receive a sequel. But it seems Inti Creates has not yet exhausted ideas for another Castlevania throwback game, as the studio recently unveiled Grim Guardians: Demon Purge to the world.

Rather than going for an old-school NES look like the Curse of the Moon games did, Grim Guardians adopts a more modern pixel art aesthetic that seems reminiscent of something you would find on the Game Boy Advance. Much like Curse of the Moon, though, Grim Guardians uses the more linear structure of the older Castlevania games. Players can freely switch between Shinobu, who fights at a distance using her submachine gun, and her sister Maya, who fights up close with her origami weapons.

Not just a Castlevania clone

Although not immediately apparent, Grim Guardians actually serves as a spinoff of the Gal*Gun series, one of Inti Creates’ previous works. Both Shinobu and Maya hail from this series, so you might feel tempted to try those games out before playing Grim Guardians. But considering those games are over-the-top dating sim rail shooter hybrids involving sexualized school girls, to say that they have a niche appeal would be an understatement.

Fortunately, it looks like Grim Guardians does not have anywhere near as high a risk of making you feel uncomfortable while playing. So more players will probably feel inclined to experience the game whenever it comes out. That may take quite a while, though, as the recent trailer indicates that the game remains in its early development stages.