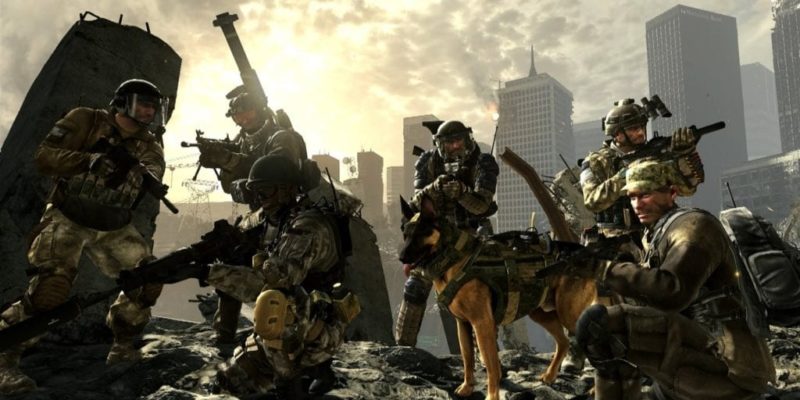 Ok … I think I know how this works. Bear with me, this latest Call of Duty: Ghosts trailer uses the word “squads” so much that it may have lost all meaning for me. Here’s what I think happens though; the modes in squads tend to be you (and a few friends) vs. the AI. Kind of like in Mass Effect 3 or something. Except. Except. Sometimes that AI is made up of soldiers kitted out and levelled up by other real people.

Wargame: This is a 6v6 mode, in which your team is you and your buddies or some other AI-controlled members of your squad. The other team is fully AI but (it’s claimed) will fight just like real people. That’s obviously going to be a bit of an exaggeration, unless the developers have coded in some basic abilities for the AI to swear at you and call you a camper. The difficulty level will scale with yours, so this is basically a training arena for full multiplayer.

Squad Assault: It’s a 6v6 again, where you and up to five friends will challenge the squad members of a real-life (but offline) player. The offline person chooses the map and mode. In this way, your squad can gather up experience points for you without you even doing anything. At last! Levelling up is becoming an automated process that we don’t even have to get involved in.

Squad vs Squad: “In squad vs squad it’s you and your squad against another player and their squad.” This is the point where I kind of just wanted to shout STOP SAYING “SQUAD” at the video.

Safeguard: This one is a co-op survival mode for up to four people. How long can you stay alive against waves of enemies? Probably about the same amount of time you were able to in all of the previous games that did this kind of mode, I’d imagine.

All of the experience points earned in the above activities will feed directly back into the ‘main’ multiplayer. The video below may explain more, but it may also just say “squads” at you some more. Watch it to find out.

Get to know XCOM: Enemy Unknown in free Steam weekend

The Men Who Stare at Mutons: XCOM The Bureau gets some DLC