Game of the year so far. I’m just going to say it. No game this year has sucked me in and refused to let go the way Borderlands 2 has. Sure, NHL 13 is stunning and my go-to game for a quick fix at the moment and Telltale’s The Walking Dead is something I’m dying to see more of as each episodes is released, but Borderlands 2 is something else.

It’s charming, horrible, addictive, explosive, gratifying, satisfying, funny, crazy and satirical. It knows what it is, what it’s trying to do and who it’s aimed at. Like the original, it starts and ends with the weapons and throws in missions, classes and characters to fill the gaps.

You haven’t experienced weapon diversity until you’ve played Borderlands 2. Forget the few attachments you get in copy-and-paste military shooters like Call of Duty and Battlefield, here you’ve got guns that spray acid, guns that explode when you throw/reload them before regenerating in your hand, guns that turn enemies into ‘slags’ (you’ll have to play it to understand) and guns that simply go boom.

Just believe me on this, that’s not the half of it. There are bazillions of different guns, apparently. Bazillions. No bullshit. That’s the truth. In the words of the game’s Tiny Tina, it’s redonkulous. Brilliant so. 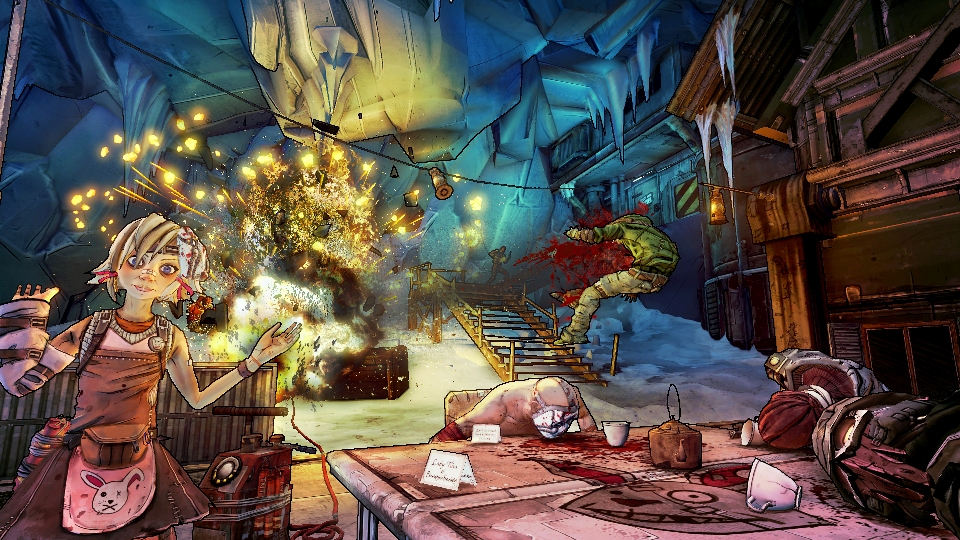 Having completed the game and currently mopping up the optional missions and so-tough-might-as-well-be-impossible bonus bosses that makes up the seemingly borderless end-game content, my Gunzerker class character (think warrior/tank) is currently packing two assault rifles, a shotgun and a sub-machine gun. They’re all rare or very rare guns (signified by their purple or orange glows in the menu) and they’re all insanely powerful – at least compared to what I’ve had before now.

One of the assault rifles deals 1506 points of damage per shot, a stat which is further buffed thanks to the way I’ve upgraded my Gunzerker – the real damage is closer to 1600. The sub-machine is my second favourite, only packing 389 damage per bullet but laced with corrosive acid that works a treat against anyone with armour – poisoning them and slowly eroding them to nothing. Robots used to me a challenge, now they don’t stand a chance.

This is just the tip of the iceberg. The weapons I’ve gone through to reach this point, the weapons I’ve seen and rejected, the weapons I’ve seen friends using when playing together. It all comes together to create one of the richest loot fabrics there has ever been. Certainly when it comes to games that have appeared on a console, Borderlands 2 has the most diverse and best loot system of all time. And I haven’t even mentioned the grenade mods, relics, class mods and shields.

My shield provides 3814 protection and also allows me to… I’ll stop there. Rest assured, you’ll not get bored.

The loot is the game’s main character. Your abilities and approach to battle change and alter depending on which ones you’re carrying and which you’ve got stored for later. Corrosive weapons are good against robots, but you’re not going to do much damage to Badass Corrosive Skag. For that you’ll want something that burns flesh and/or fires explosive bullets. 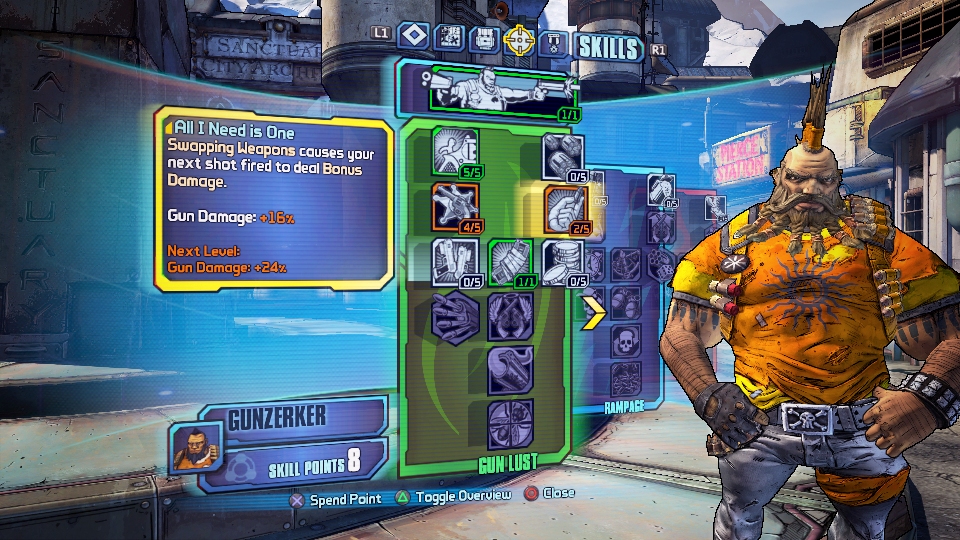 Weapon personalities are aided by the sharp distinction between the different manufacturers that have set up shop on the game’s planet Pandora. Jacobs is all about brute force, big damage without fancy features. Jacobs is possibly my favourite brand, it goes well the Gunzerker. Creates a nice, muscle-bound aesthetic.

Elsewhere you’ve got the high-tech Tediore, a producer of guns that dissolve once the clip is out of ammo, only for it to reappear in your hand reloaded. Maliwan’s tend to favour fast fire rates and elemental effects (such as the aforementioned corrosive power) and Dahl make steady all-rounders.

Each manufacturer has a distinct approach to design, meaning you can often work out which company a gun belongs to before you’ve picked it up and obsessively poured over its stats to compare it to your current arsenal. That visual identification is key to bringing the weapons alive, making them more than a simple set of digits and stats, turning them into something with charm and genuine flair. Depending on your class and playing style, you’ll have likely made a judgement about new weapons just by looking at them.

To get the most out of the game, you’re going to want to play as a team. Most of my time was spent playing as part of a pair, but it’s better to fill up all four character slots. Enemies scale depending on how many of you are playing; more of you means more (and tougher) enemies. On the plus side, tougher enemies equals better loot. Better loot equals fun times.

Ideally, you’ll want to form part of a team comprised of the game’s four different classes; Gunzerker, Assassin, Commando and Siren. Each has different abilities that complement one another when used correctly and are more than useful when it comes to Pandora’s most challenging battles. The Commando can deploy a turret that automatically fires at any enemies in range and is a life-saver when facing off against fast moving airborne threats. Using the turret as a distraction while the Gunzerker enters the dual-wielding, health reviving, middle finger raising Gunzerk mode and you’ve got a pretty efficient recipe for destruction on your hands. 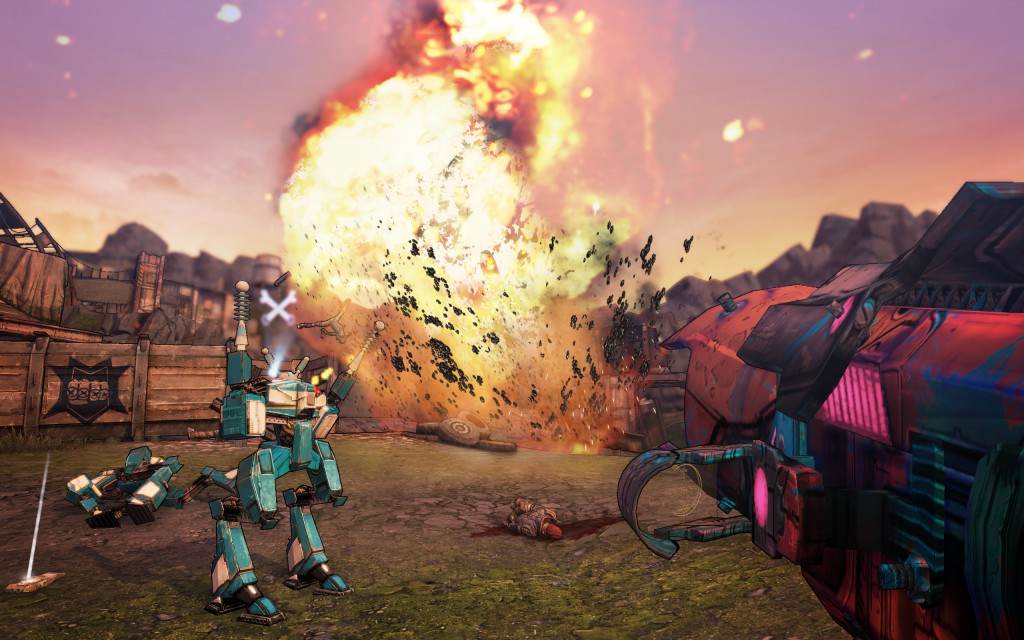 The fact that, for a price, points you’ve spent on your skill tree can be redistributed as often as you like means that you can adjust your character to work best with however (and whichever classes) you’re playing alongside. Some of the more hardened dungeon crawlers amongst you might turn your nose up as this kind of inclusion, but Borderlands 2 is a game about having fun and crafting as close to perfect class builds and item sets as possible (on a mission to mission basis). Changing up your skill tree on the fly allows you to do that.

None of this would mean anything if the missions and environments weren’t up to scratch. Compared to the original, Borderlands 2 is a smorgasbord of colour and variety. Whereas you were stick in the brown/grey Wasteland for pretty much your entire run in game one, you’ve now got lava caves, acid swamps, ice-bound tundra, deserts, mountains ranges, green valleys and more to explore.

Populating these areas are a vast number of side quests that make up the real meat of the game. The main story is good and adds some needed substance to the narrative, but the funniest characters, most challenging fights and best rewards come from the optional missions. Moments of brilliance come out of nowhere, from a downed robot you happen upon while exploring a sewer and is keen to change its life for better (from killer to lover) to a 13-year old demolitions expert hosting a sadistic tea party.

I’m not going to pretend I’ve finished every side mission (that would take hundreds of hours), but it’s a good sign that as I’m writing this the game is currently paused waiting for me to jump back in and explore those nooks and crannies the main quest didn’t show me.

This review started by saying that Borderlands 2 is the game of the year so far. It’s going to end the same way. Perhaps its biggest accomplishment is that, by blending genres together, it makes RPGs accessible to shooter fans and shooters accessible to RPG fans. Many games claim to have conquered the crossover territory, few succeed.

Borderlands 2 succeeds with all guns blazing. Every bazillion of them. Game of year so far.

Erm… the bad? Well… the vehicles could still do with a bit of work, I guess.

Frontier is “your playground” in Assassin’s Creed 3 [Video]

Slimmer, cheaper PS3 to be released next week