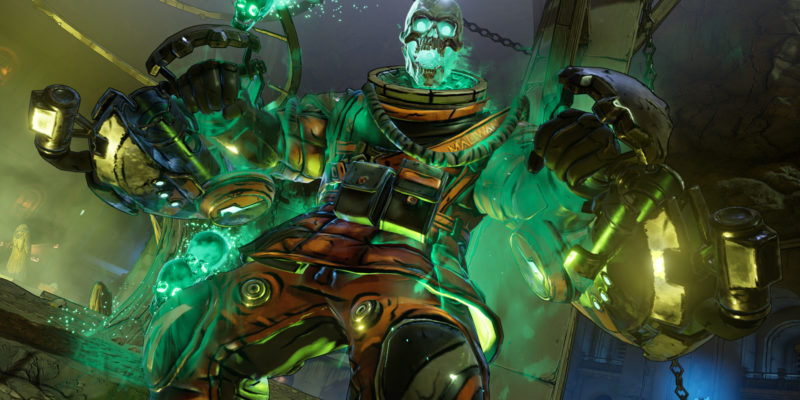 The annual Halloween event for Borderlands 3, Bloody Harvest, returns starting today and lasts until November 5. Players will be able to unlock rare items only available during this event as they take on the spooky Captain Haunt and his undead minions.

Maurice continues his study of humans, and tasks you with traveling the galaxy to kill haunted enemies and collect an element called “Hecktoplasm.” This is an element that is dropped from the ghosts that appear after you kill haunted enemies. Haunted enemies will always have a distinct green glow on them, making them easy to spot. Once you collect enough, Maurice will open a portal to Heck, and no, it’s not the planet that Earthworm Jim goes to. Once in Heck, you will have to take on the aforementioned Captain Haunt.

All the loot you collect in Heck will scale to your current level, so don’t worry about what level you might be before entering. Much of the loot you will find in Heck will have powerful “terror” effects. For those who don’t know or don’t remember, your character gets terror when haunted enemies touch you. The more terror you have, the slower and less accurate you will become as green effects crawl up the corners of your screen. Sounds like a bum deal, right? Well, there are several items that turn terror into a positive effect giving you huge bonuses. Terror benefits can do anything from buffing your damage to healing you and much more.

It’s about to get spooky!

Players will also get bonuses for completing challenges in Heck. Beating four challenges gets you an ‘A Shrinking Feeling’ weapon trinket. Eight gets you a ‘Message from Beyond’ ECHO Device skin. 12 unlocks a ‘Haunted Look’ shared Vault Hunter skin. Lastly, 15 challenges completed gets you the rare ‘Porphyrophobia’ weapon skin.

Bloody Harvest is free for all players but you must at least have the base Borderlands 3 game to participate. As a bonus, you can also complete event challenges in the DLC locations for The Handsome Jackpot, Xylourgos, Gehenna, and Krieg’s Mind if you bought the respective campaign add-ons. Don’t forget the event ends on November 5, so get hunting.