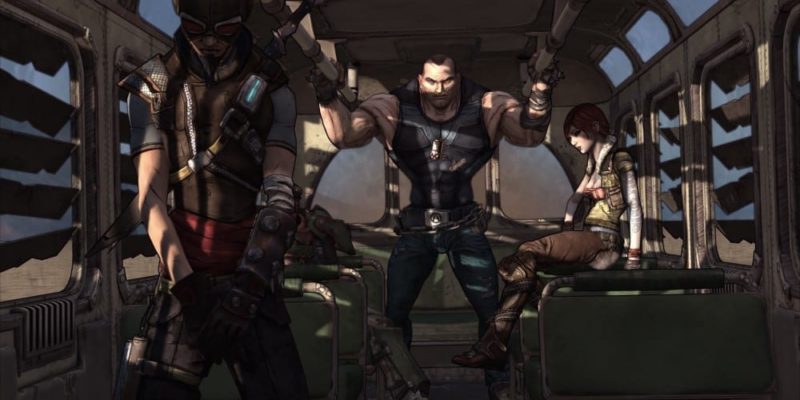 My first couple of hours playing Borderlands: Game of the Year Edition has brought back wonderful memories. I played the original on and off for the Xbox 360 almost a decade ago. Since then, I’ve also obtained it for PC. To say that it satisfied my itch for an exciting looter-shooter was an understatement. The Borderlands franchise, for me, defined just how good it gets in the genre.

That brings us to today’s technical review which focuses on Borderlands: GOTY Edition’s graphics, controls, performance, and upgrades. Just like the caches you’ll find in Pandora, there’s a lot to unpack. But first, let’s take a look at the system requirements found on the Steam store page. Note that the game is listed as Borderlands Game of the Year Enhanced and it even has a nifty new launcher. 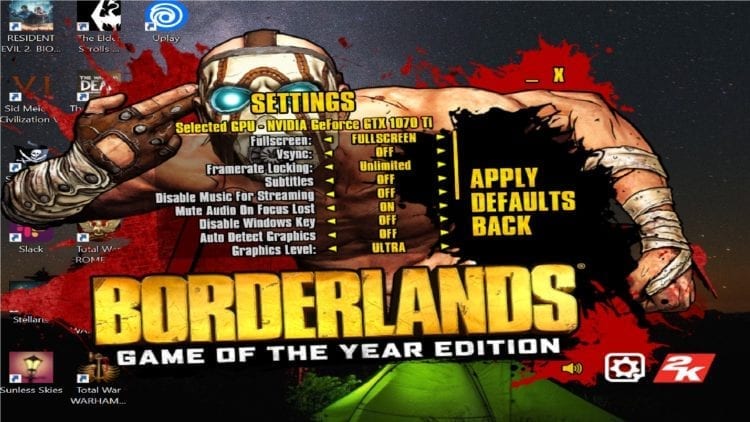 Let’s face it, Borderlands games were never too demanding. Hand-drawn goodness and artistic flair aside, you probably won’t run into any major issues in terms of graphics or performance, even with slightly older rigs. Although, you’d have to make sure you’re using a 64-bit OS. 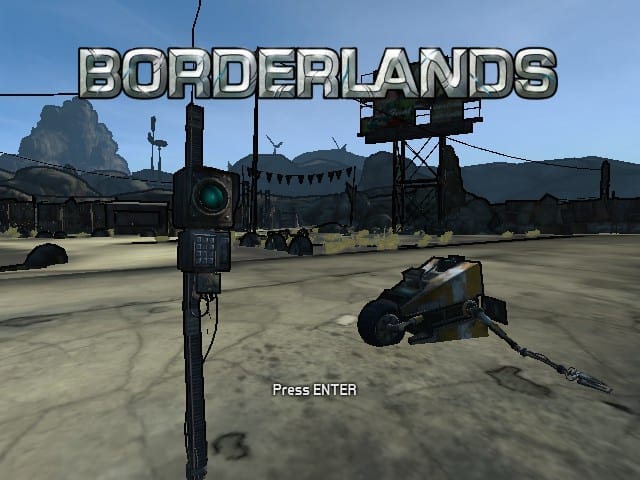 Hey, remember what the main menu of the original looked like?

The enhanced edition shares the same options as the original with a few additions. You’ve still got your FXAA,  texture quality, game detail, and so on. However, you’ll also notice V-Sync toggling, more resolution options, framerate caps, and even the ability to change the field of view (FOV). 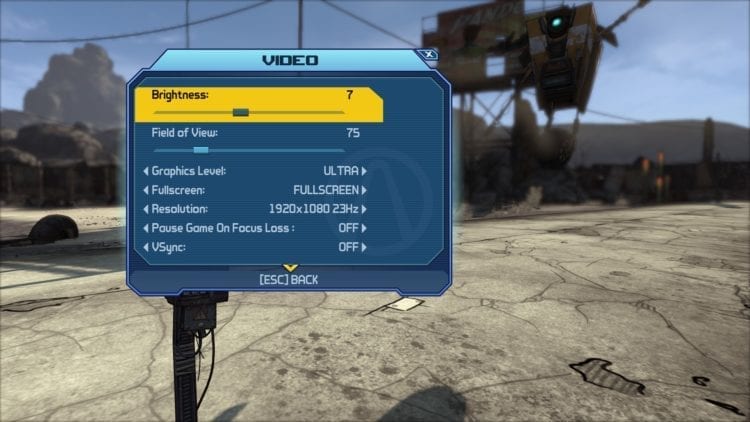 Again, this isn’t a demanding game and I’m on a 1080p display anyway, so I went for the Ultra preset. Also, given that this enhanced edition is 4K-enabled, then those with flashier displays would greatly benefit from the upgrade. 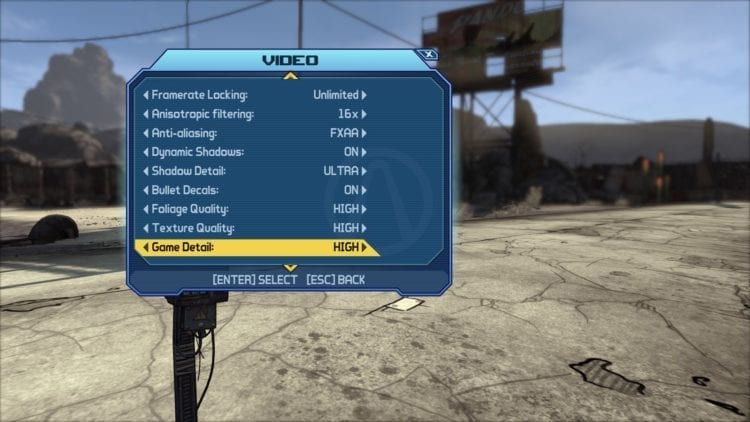 In any case, what’s noticeable is that cutscenes and scripted moments seem to remain locked at 30 or 60 FPS. Once you start playing the actual game, you’ll notice the difference. For reference, the original Borderlands seemed to be capped at 62 FPS for regular play. As for Borderlands: GOTY Enhanced, I was getting 175 to 200+ FPS! 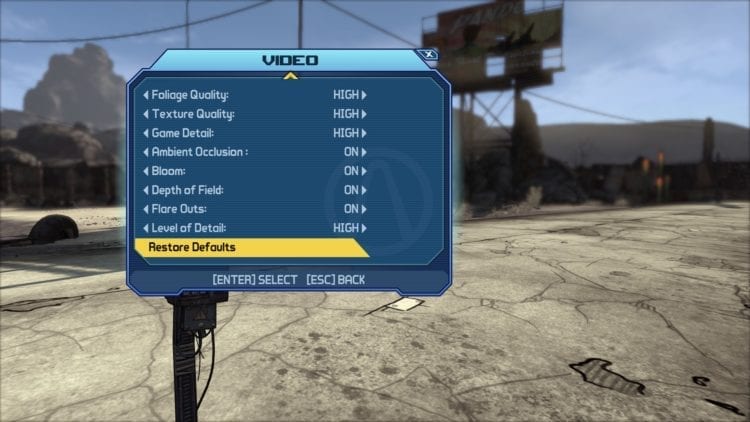 Being able to scale FOV accordingly is a godsend for me. My wife also plays games and there are times when she’d feel dizzy or nauseous owing to default FOV settings that couldn’t be changed. For Borderlands: GOTY Enhanced, I let her find the FOV settings that she was comfortable with.

Here are some screens comparing the different FOV slider settings. Check out each image below for a larger view: 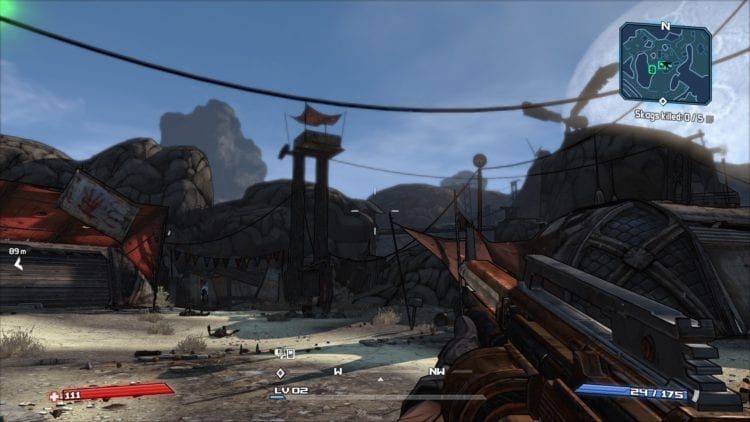 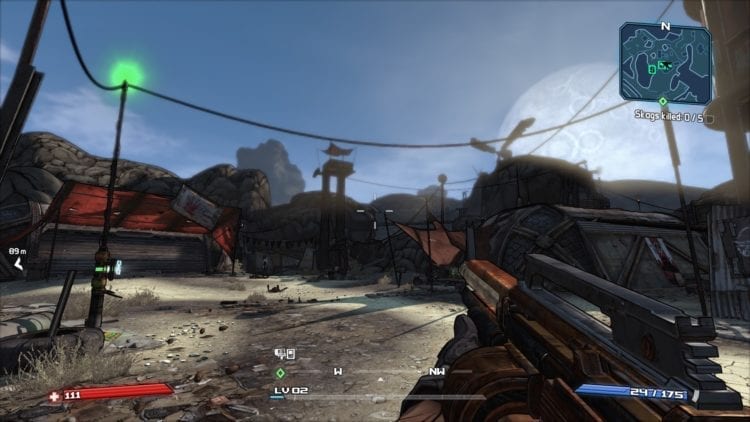 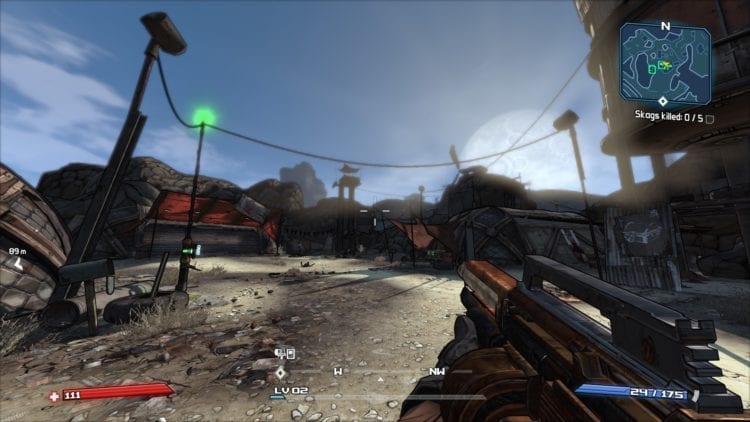 120 FOV (max). Play Borderlands through the eyes of a fish.

For this one, I decided to compare the graphics for the original Borderlands as well as the Low and Ultra presets for the enhanced version. Check out each image below for a larger view.

Here’s when you can select your character while on the bus: 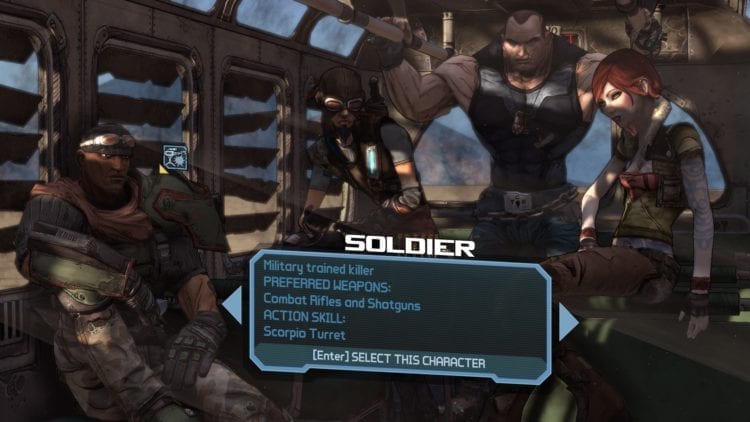 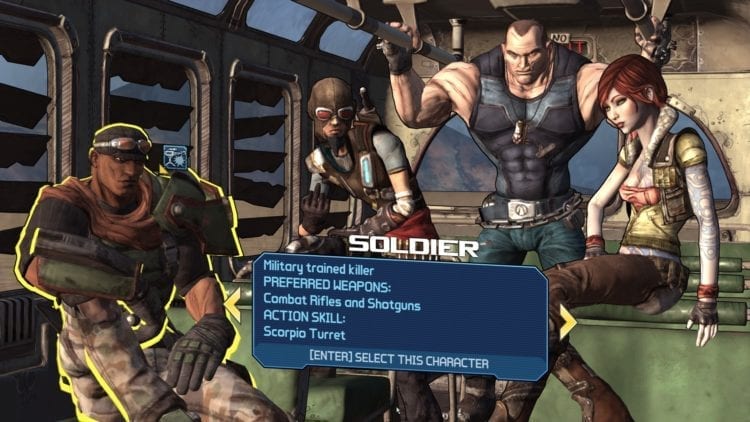 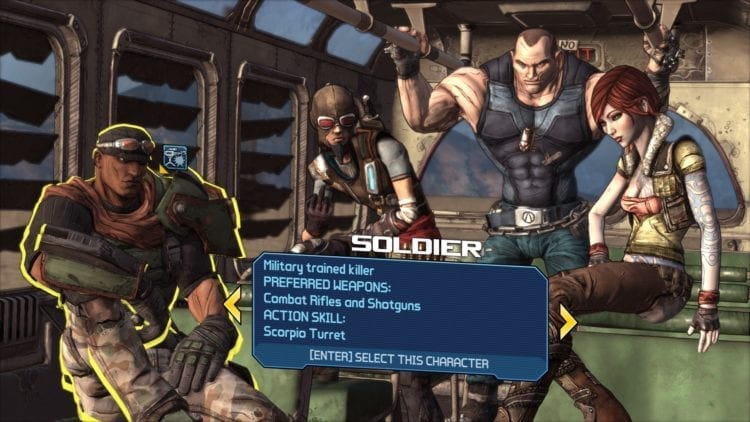 This is before Claptrap enables your HUD: 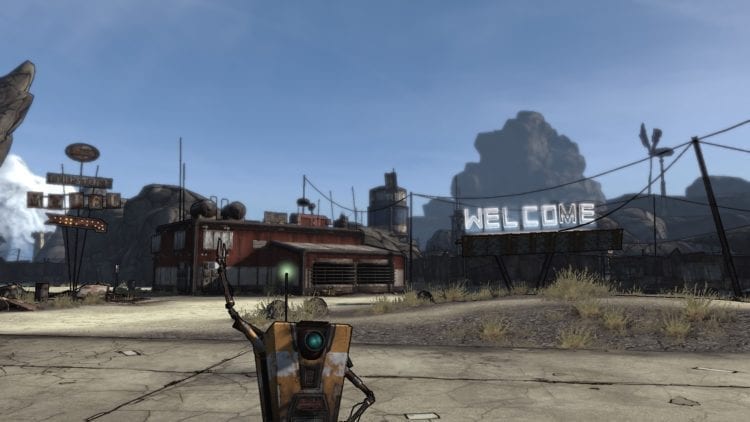 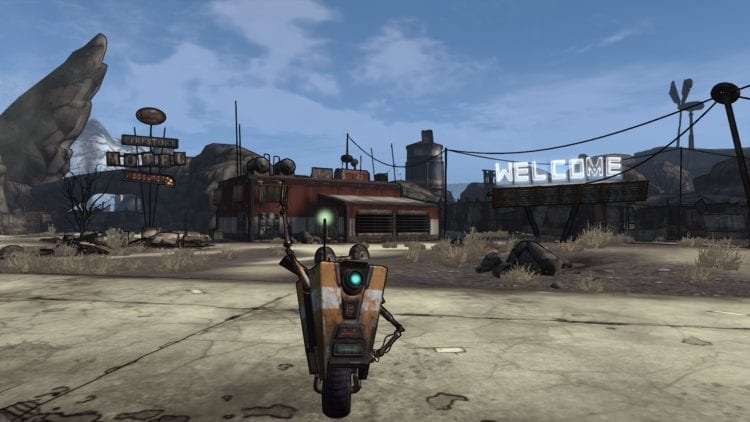 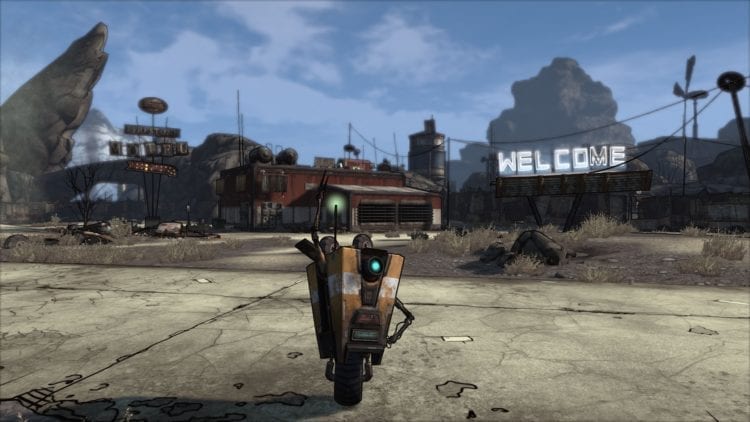 This is just before you start fighting bandits: 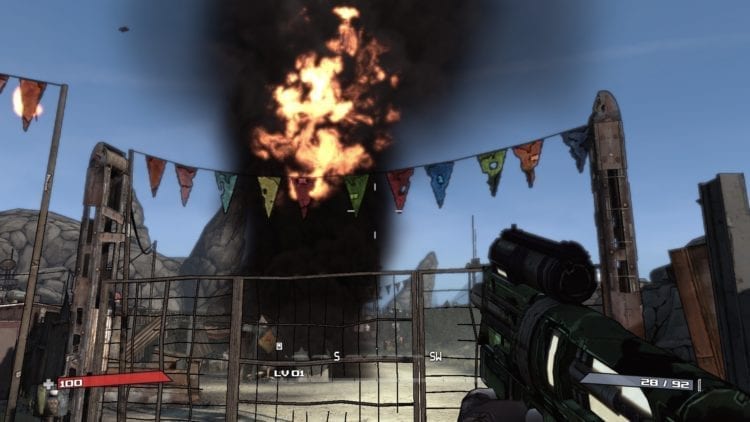 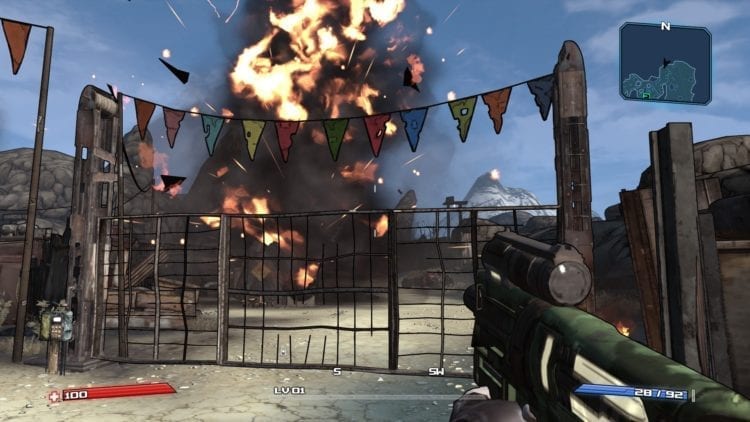 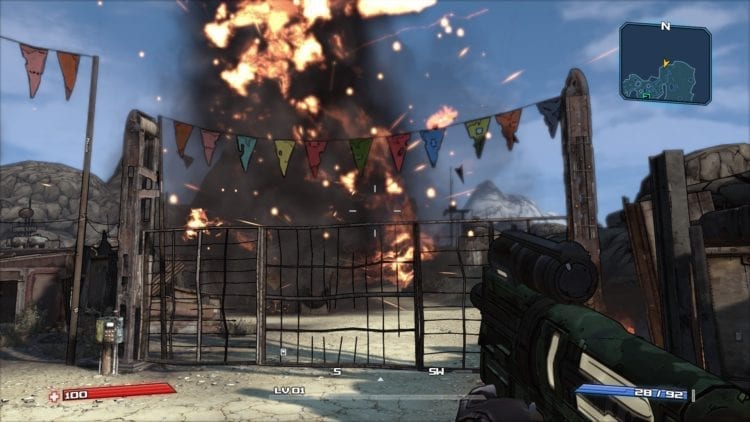 Obviously, the original’s graphics would seem outdated in comparison, even when compared to the enhanced versions Low preset. The Low preset itself isn’t half bad, but you could do better. The Ultra preset, meanwhile, adds more detail and quality to textures and particle effects with minimal impact on performance. Go Ultra all the way especially when you’re far above the recommended specs.

One of the new additions to Borderlands: GOTY Enhanced is the minimap on the upper right-hand side of the screen, along with a refined inventory system. Remember this? 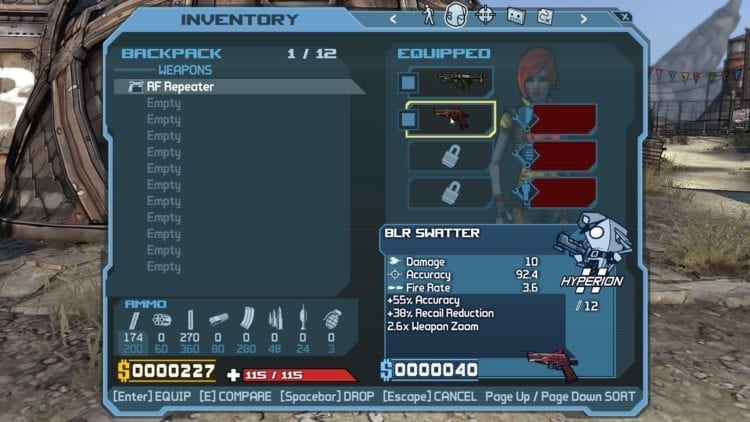 This was the inventory screen from the original game. Now, that’s at the start of your journey. Imagine having dozens of items to sift through? It’s quite a pain to go through that list just to equip an item. 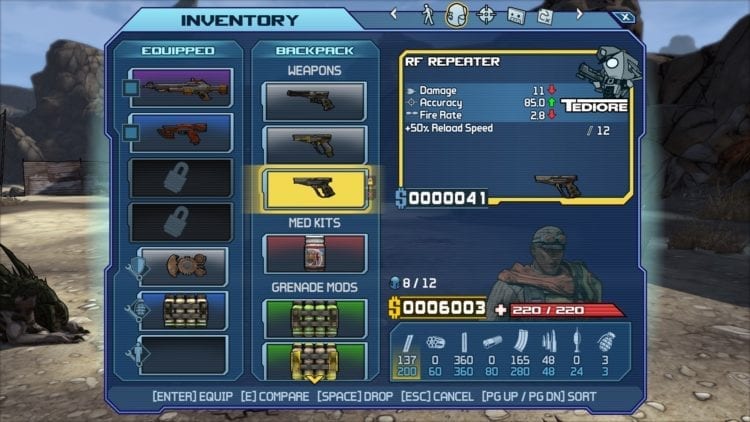 The above inventory system for the enhanced version looks sleeker and more intuitive. With bigger icons and item boxes, you’ll hardly worry about misplaced or misclicked items. It’s similar to Borderlands 2’s interface. Apart from these, ammo and cash pick-ups are automatic. No longer do you need to keep pressing “E” every time there’s clutter on the ground.

You’ll be able to rebind your keys when using a mouse & keyboard setup. In fact, instead of the old generic aim sensitivity options, you can now specify what you’d want from each axis as well as when you’re aiming down sights. 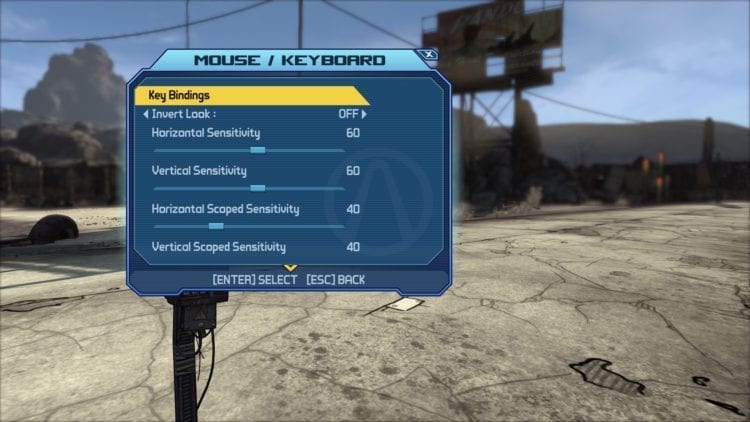 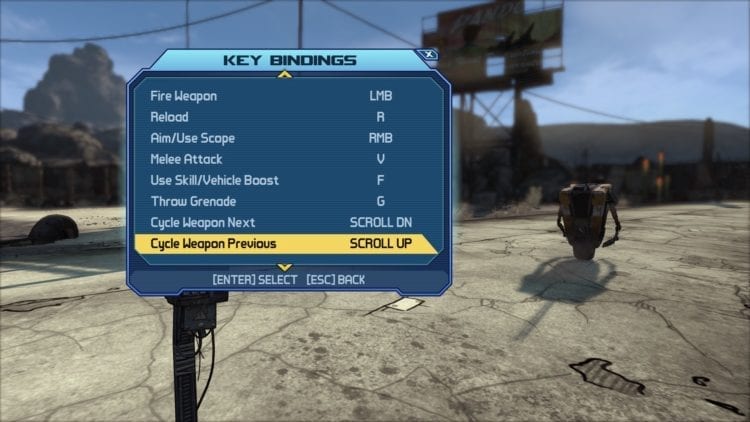 You can also change your controller presets. I’m using a Dragon War wireless controller. That’s an Asian brand and it’s akin to an Xbox controller as well. I haven’t encountered any issues as the controls remain responsive. 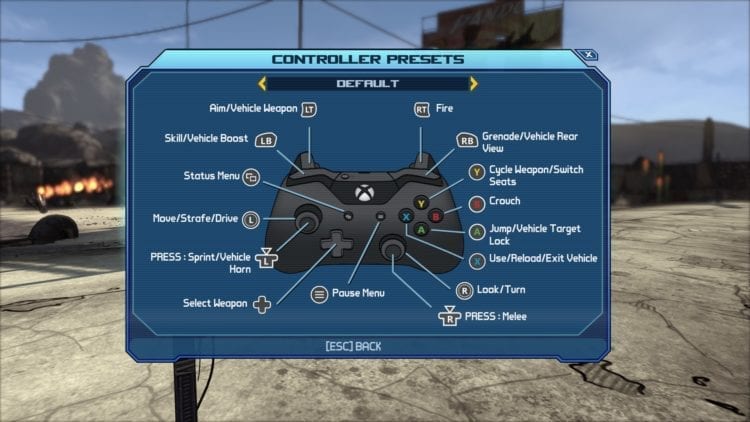 For the gameplay options, you can turn off tutorial messages and hints, aim assist, duel requests when you’re playing co-op, and more. You’ll also be able to toggle the launcher, Windows key, and opening movies off as well. With regards to aim assist, you’ll probably want it enabled when using a gamepad, but disabled when using your mouse and keyboard. 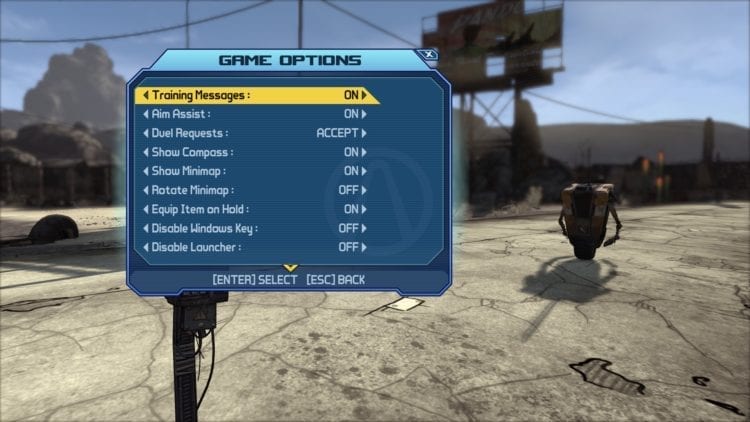 For audio, you’ve got your usual volume sliders and subtitle toggle. Sadly, there are no additional presets to change between Stereo, Surround Sound/Home System, Headphones, and more. Note that your push-to-talk key can be changed via keybinding options. 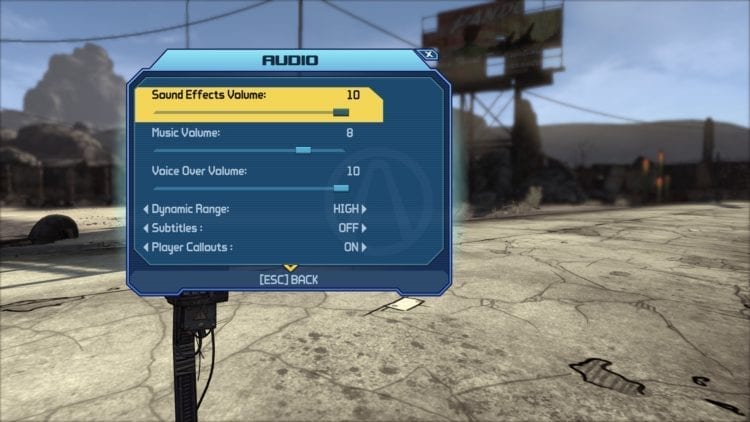 Overall, my foray back into the world of Pandora and the Borderlands universe has been exceptional thus far. The upgrades to graphics, FOV sliders, and additional tweaks are very much welcome. Oh, and before I forget, you can also import your character from the original game and continue your progress onwards. 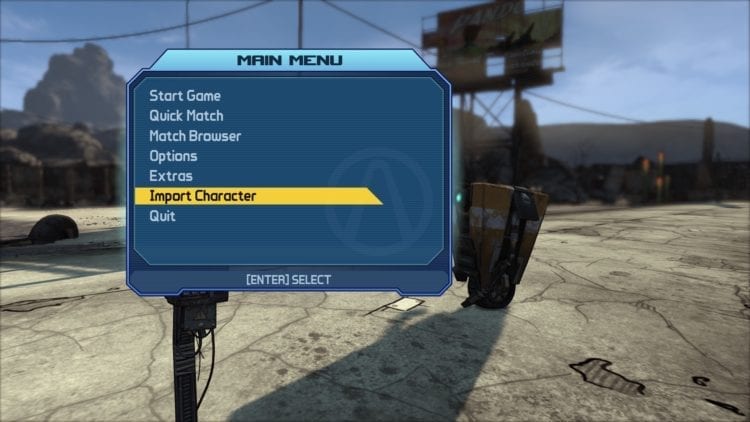 Importing your character from the original game is also possible.

The fact that it’s also free for owners of the original — while including all story DLC — is icing on the cake. That this enhanced edition manages to improve on a majority of aspects from its predecessor is something we can’t say for the Assassin’s Creed III remaster. As you’ve seen in our previous tech review, that particular “enhanced edition”  just did not live up to expectations.

I digress. If you’re looking to revisit a refined form of a classic, then you can’t go wrong with Borderlands: Game of the Year Edition (ahem, Enhanced). Borderlands 2 and The Pre-Sequel also got their HD texture packs earlier today. There’s a good chance that the old games in the franchise will keep you preoccupied while waiting for Borderlands 3. Whether you get it on September 13, 2019 (EGS), or April 2020 (when Epic’s exclusivity deal ends), is up to you.

Anthem’s Development And The Failure Of “BioWare Magic”