If you’ve fought a vicious Nydak on the planet Dathomir before, you won’t be surprised by the Nydak Alpha legendary beast. Much like the Rabid Jotaz from before, the Nydak Alpha is about the same as its smaller siblings but with a larger health bar. Luckily, it also carries all of the Nydak’s weaknesses.

The Nydak Alpha’s intimidation factor ends not long after you stumble on it. It comes in swinging and, if you’re adept enough at dodging, missing as well. The Nydak’s strength is in its unpredictability in movement, as it dashes from one side of the arena to the other before charging in to throw claws. But it’s easy to manage once it’s up close. 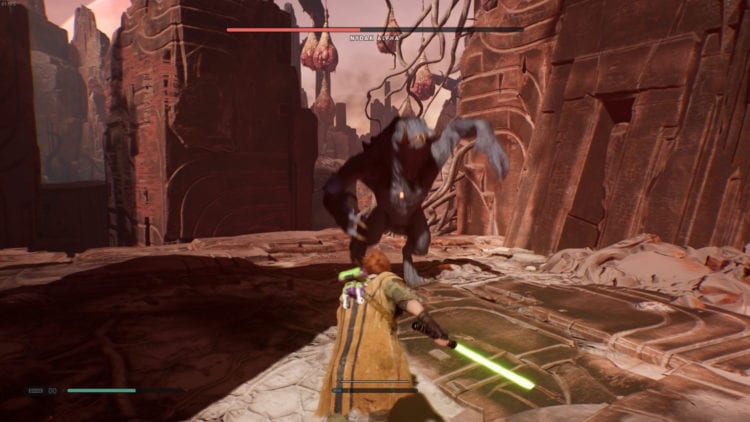 Wait for it…wait for it. Keep waiting.

Your best defense against the beast is your ability to counter. The Nydak Alpha announces its attack so loudly that old Ben Kenobi in the future can deflect it. Swinging its arms in a wide, slow arc, it practically begs you to parry the attack. And when you do, the stun can last for several seconds, which is more than enough time to get damage in.

My best strategy uses a combination of counter attacks and Force powers. After deflecting an attack, hit Force Slow just as it goes into a stun animation. That will give you ample time to shave away its health bar. Let it dance around the arena a bit more, dodge that charged jump attack, and repeat. Victory is practically assured.

Next up, it’s the Dathomir bum fights.

By Jason Rodriguez19 seconds ago
Guides