Who is that mysterious stranger who chats you up on Dathomir? Why, it’s Taron Malicos, a fallen Jedi Master who’s grown lonely as the greasy and weird king of the “Nightpeople,” and decides to recruit you into his cult of grime. But as Cal is the strapping young go getter who enjoys baths and is trying to restore the sanctity of the Jedi, he says no. Of course, that means it’s time for foitin’.

Taron Malicos is a tough enemy to face. Luckily, you don’t have to tackle him on your lonesome. Merrin, the Nightsister who was tricked by Taron to become your enemy, resurrecting her fellow Nightsisters as zombies without a hint of moral scrutiny, has decided she’s had enough and joins your side. On occasion, Merrin will hop in and stun Taron long enough to either get him off your back or give you a chance to do some damage.

This is a tough boss fight, but it’s deep enough in the game for you to know the steps to the dance. Tap the parry button whenever comes in swinging with his two lightsabers. Return the favor by slashing away until his defense meter is spent.

My best strategy against Taron was to drop his defense to zero, slash twice and then use the double lightsaber attack that was learned on Ilum. This does a lot of damage, and the final blow from the double lightsaber move knocks Taron back, allowing you to take a quick break and get ready for the next clash. 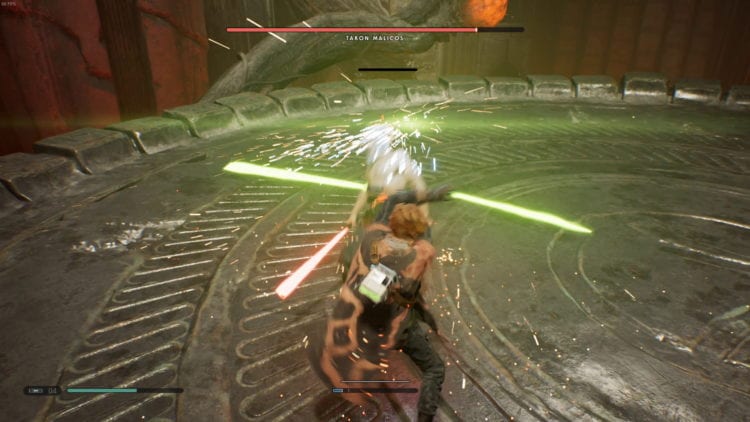 Slash twice then hit him with the ol’ razzle-dazzle.

This won’t be enough for a quick victory, naturally. Talon is a Jedi master, grease notwithstanding. When he brings both his arms back, prepare for a Force Push by blocking. He can also perform an unblockable move, flashing red as he flips into the air before bringing both lightsabers down in a damaging attack. On occasion, he’ll use the Force to fling several chunks of stone pulled from the arena. You can dodge the stones fairly easily though, simply by moving left or right. Or you can dodge if that makes you more comfortable.

You’ll enter his second phase after bringing his health to half. This is indicated by a short cutscene in which Cal gets saved by Merrin. This is when things get a bit hairy. Talon still uses many of his prior moves, but they’re now more enhanced. He flings his lightsabers at you (which you can parry) and follows it up with a flying attack. Talon also includes the unblockable attack as part of his combo. He also sends far more stones your way, so make sure you have enough distance to dodge. 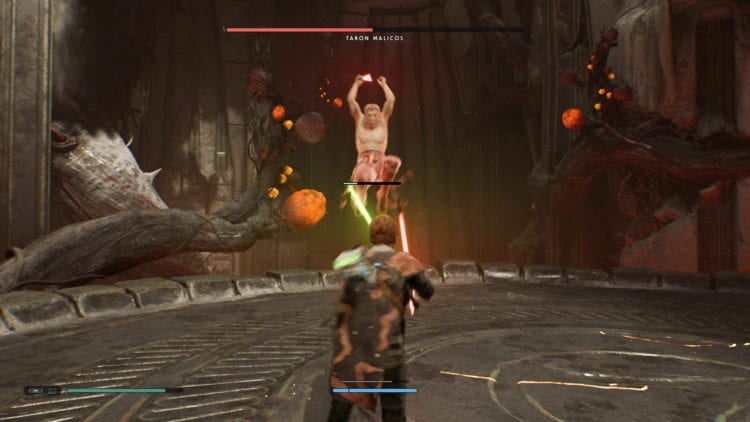 Don’t let his looks (and possibly smell) fool you, Taron is still a Jedi.

The fallen master also attacks more quickly and viciously in his second phases. Do not attempt to attack him after his charged double lightsaber strike, as sometimes he continues the combo immediately after. Attacking him directly will cause him to use his strength to push you away, which leads to a combo ending in an unblockable attack. But if you time your counters, you’ll gain the upper hand.

Next up…the final boss fight of the game.