The AT-ST boss looks imposing at first, (I mean, it’s a freaking AT-ST.) but fret not. This fight is merely a skill test, a way for Star Wars Jedi: Fallen Order to make sure you understand the new mechanics offered on your first trip to the planet Zeffo.

On Zeffo you learn the Force Push ability. The AT-ST uses an array of weaponry that can be turned right back at it, so long as you get the timing right. But so you know, you cannot Force Push blaster shots, no matter how much you want to be Kylo Ren. I don’t think anyone outside of a Comic Con wants to be Kylo Ren. 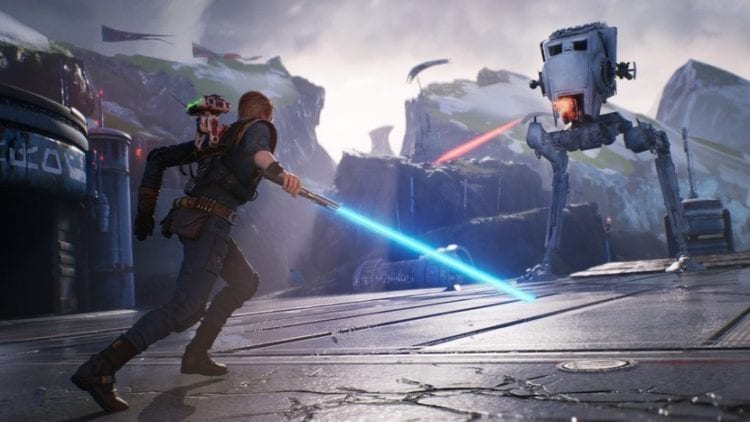 Getting up close is the best way to tackle the AT-ST.

The AT-ST has multiple methods of attack. Most obvious are the blaster shots that it sends your way when you’re at enough distance. Like all enemies in Fallen Order, the AT-ST announces its blaster shots with a red ring before firing away. With good timing, you can reflect these shots back at it for a surprising amount of damage and a little knockback. Its second attack is a homing missile. This is where your Force Push comes into play. Wait a moment for the missile to get between you and the metal chicken, and then use Force Push and send the package back home. The AT-ST also lobs out a bunch of grenades to prevent you from getting too close. However, when the grenades are in the air you can push them right into its face for a good chunk of damage.

Despite the grenades, you can get in close to the walker. In fact, I highly suggest doing so. Due to the AT-ST’s bulk, it can’t look down and fire blasters or missiles when you’re scurrying around its legs, close enough to give ’em a smooch. You can do a lot of damage in a short amount of time by slashing away down below with your lightsaber. The AT-ST will defend itself by dropping grenades at its feet. But if you step back after taking a few swipes, then rush back in after the grenades pop, you can get a rhythm going.

The AT-ST is not a tough fight, but it does have one more surprise. Once you take it down, the pilot will plop out of the cockpit for one last do-or-die attempt. If you’re desperately low on health, this will be an unwelcome meeting. But for the most part, you should be able to cut him down in one swing.

Next up is the fight against the Albino Wyyyschokk, a much more challenging fight.