The Rabid Jotaz can be defeated like any other jotaz you’ve face up until this point. It’s tougher and meaner, but just about the same albeit with a lot more health. Luckily for you, due to the arena in which you fight the legendary beast, you can defeat it easily with a healthy supply of cheese.

When you first enter the arena where the Jotaz lives, you’ll be above it on a walkway. You can get some early damage in the fight by jumping above its body and tapping the attack button prompt when you see it. The walkway that surrounds the arena can be reached once again with a climbable wall, so if you’re looking for a short breather, you can get back above where you’ll be safe.

But escaping shouldn’t be necessary, so long as you follow some easy steps. In the center of the arena is a metal pillar. By placing the pillar between yourself and the Rabid Jotaz, you can force its AI to make the beast stand and attack without getting close enough to deal damage. The Rabid Jotaz has several attacks at its disposal. It can swipe once, twice, or even thrice once it gets close enough. Generally, the moment it finishes the attack animation, you can run and and get a few swipes before dodging away. 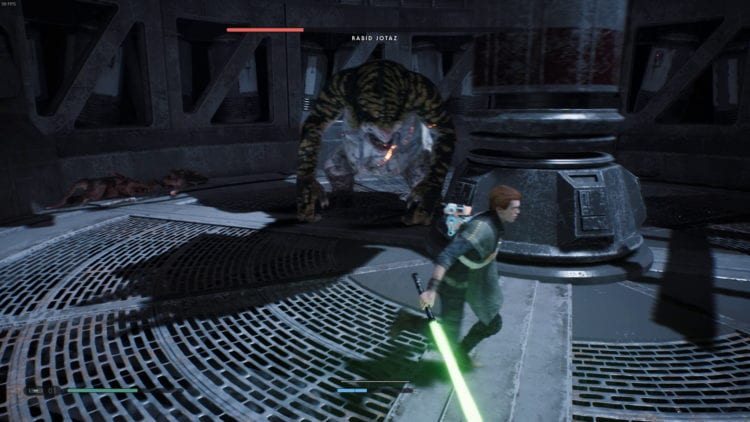 Ring around the rosy.

Of course, you could try the more risky approach. The Rabid Jotaz has a rather nasty unblockable attack. Flashing red, the Jotaz will roar before swiping its hand once, then bringing both arms up and ending with a massive ground pound. This move has splash damage, so even if you try rolling away you can still get caught up in the attack. But following the pillar instructions from up above will lead you to a swift victory. Do not try and block its three-hit combo. You’ll lose most if not all of your defense stamina, leaving you vulnerable to a series of attacks that will drain your health bar — or kill you immediately.

Next up is the second fight against the, erm, Second Sister.