“Force lightning” boogaloo is a bit misleading, isn’t it? As far as I know, Fallen Order doesn’t allow you to shoot lightning out of your fingertips. That’s more of a Dark Side trait, isn’t it? Anyway, back on Zeffo you once more run into the Second Sister, who has brushed up on some fresh taunts for Cal.

The Second Sister isn’t fooling this time around. Your first encounter with her was more or less a boss tutorial. This time you have some experience under your belt, and she comes at you as a full-fledged boss — well, more or less, but we’ll get into that later. Countering her attacks is pivotal in this fight, and hopefully at this point in the game you have done some practice. She charges you right off the bat, swinging fast and hard. Parrying each lightsaber blow allows you to whittle down her defensive meter for a couple swift attacks. 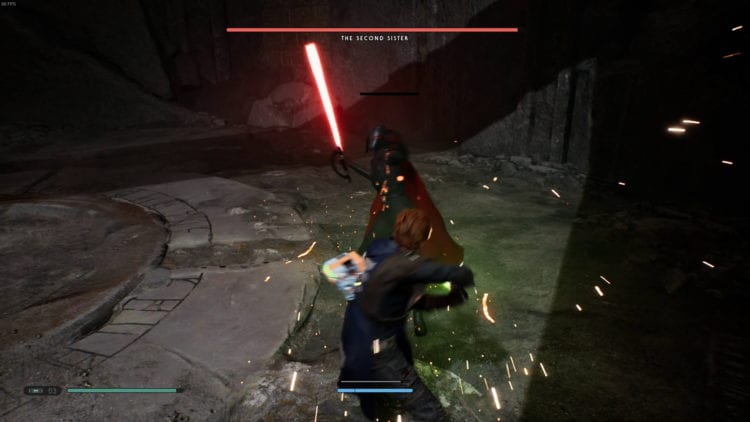 Counter her attacks for some quick damage opportunities.

She uses the Force quite often in the fight, of course.  Her favorite move of the fight is to dart around the map in the blink of an eye, using your momentary confusion to lob some taunts your way. After chasing her down a few times, she returns to the fight in different ways. In one instance, she glows red with a charged attack and then flies in your direction. For another, she will instantly remove the distance between you and fly into the air for a downward stab (that she can charge).

Either move can be dodged or blocked. The downward stab is a good move to dodge, as it momentarily keeps her still for a few seconds allowing you to get some damage in. She might also do a lightsaber pirouette in your direction, just to show off. And, well, you know, hurt you bad. 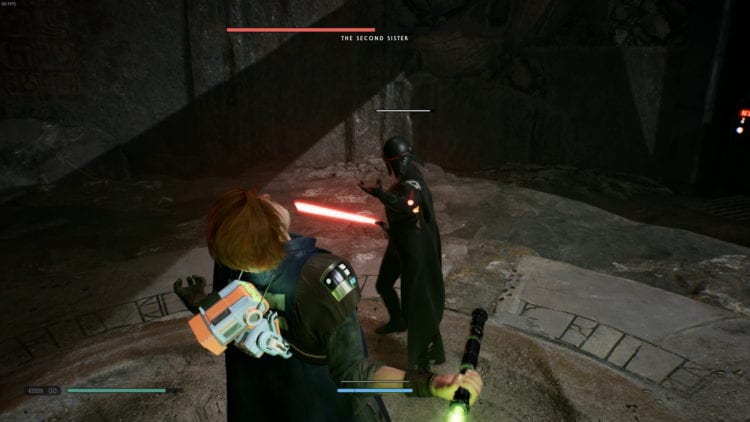 The safety word is gummy bear.

Her use of the Force can be a tad scary to deal with. The Second Sister can Force Push you by around 10 feet, then charge in your direction as you stumble about. However, you can block a Force Push. Holding block allows Cal to counter the enemy’s power with his own, staying on his feet and ready to continue the fight.

Just like with the first fight, you won’t defeat the Second Sister here. Nor does she defeat you. Once you take her health to around half, a scene plays out where BD-1 saves Cal just in the nick of time. After a nice little plot twist and some last-minute taunting, Cal hurries on his way.

Next up is the arena and bounty hunter boss fight.