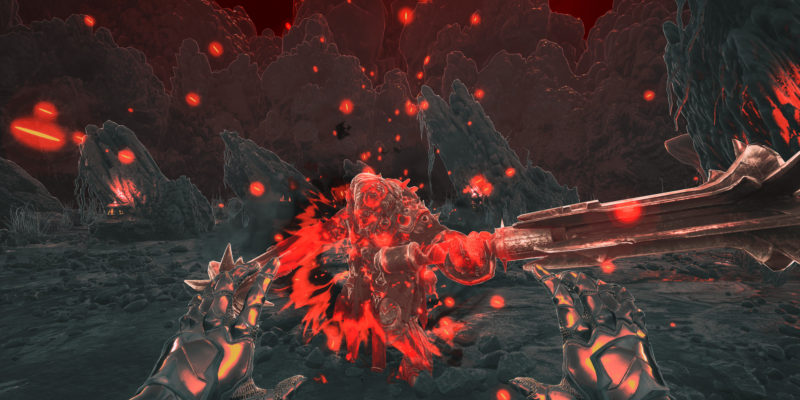 The intoxicating allure of modern Doom’s hyper-aggressive ballad of blood and bullets did not go unnoticed. There comes a moment when every facet of the game is in perfect harmony with each other, conducted by none other than the player themselves. It’s here that every shot will magically find its mark and shower the screen in celebratory gore, while the music matches your tempo, amplifies your adrenaline rush, and encourages you to continue the carnage. This popular gameplay phenomenon is a highlight for players, and a design dream for developers. BPM: Bullets Per Minute is an exercise in harnessing the power of this partnership between music and gameplay to nurture that perfect flow.

It comes as no surprise that BPM: Bullets Per Minute reeks of Doom influence. As your chosen Valkyrie, you mow down legions of monstrosities in a one-sided massacre powered by a hard rock soundtrack. But beyond just Doom, the renewal of rhythm games (e.g., Crypt of the Necrodancer) has created the perfect climate for ultimate musical murder experience. BPM: Bullets Per Minute channels rhythm games to generate similarly chaotic experiences with its own unique twist. The introduction of rogue-like elements gives rise to more emergent scenarios that ensure the symphony of violence never ends. It is a rogue-like rhythm shooter that shouldn’t be ignored. 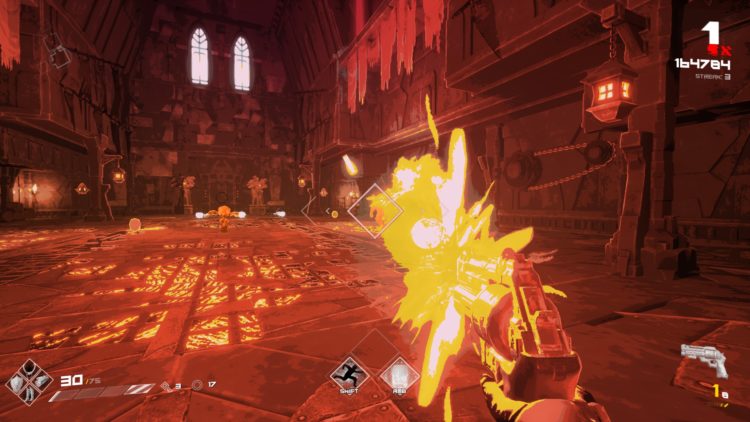 Sing praises to the Gods

The world of BPM: Bullets Per Minute is fueled by Greek mythology. The gun-toting Valkyries are tasked with combing the many realms for the Underworld’s forces. NPCs, enemies, and locations are all pulled from Greek myth, then made to undergo a beautiful/gruesome transformation. But what’s most striking isn’t its theme — it’s the heavily-saturated, psychedelic visuals. Most of the stages are bleeding red and are borderline overexposed. It’s a hellish visual experience to say the least, but one that serves the game well. It accentuates the chaotic and disorienting nature of the game while also highlighting enemies and projectiles. Admittedly, the combination of rapid camera movements and the visuals wreaked havoc on my eyes. Fortunately, separate saturation sliders for each stage allowed me to tweak the look to my liking.

Equally prominent are the enthusiastic roaring of electric guitars on the game’s hard rock soundtrack. Each stage has its own track, with separate tracks for certain rooms as well, that help dictate its personality. It’s like playing through your own ever-evolving rock musical, but replace all the words with explosions and gunfire. Every track keeps a steady BPM, for your rhythm gaming pleasure, and leaves room for you to add your “percussion.” They’re both memorable and attention-grabbing, but not so much as to distract. BPM: Bullets Per Minute walks a fine line with its music, but finds unequivocal success. 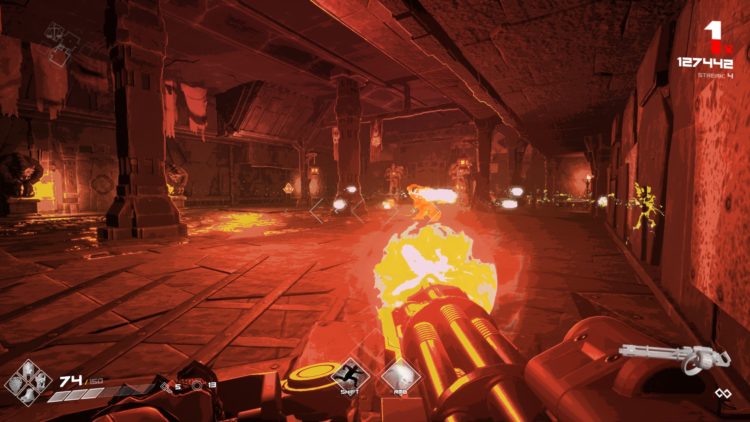 All I see is red.

The instruments of war

The Valkyrie’s arsenal features of a host of weapons suitable for slaying monsters and accompanying hard rock. Weapons only fire when shot to the beat of the music, indicated by an informative, pulsing crosshair. Certain guns can fire on half-beats as well. Reloading follows similar rules, with each step of the reload synced to half beats. As tools of destruction, your guns serve their purpose well, with the exception of a few that are constantly outshined. Gun feel is more of the same, with certain weapons feeling hefty and powerful, and others like toys. As musical devices, the same trends persist. Certain reloads and fire patterns fit beautifully with every track, others are impotent instruments. And in a game centered on the energy of the music, it becomes worthwhile to ignore weapons that don’t satisfy the criteria.

Valkyries have additionally utility in the form of a double jump and dash which also need to be executed on beat. Latter stages are littered with hazards and gaps that demand both to keep your runs going. An active ability and ultimate ability, both on cooldowns, can be used to the beat to gain a quick advantage over your foes. Your foes, of course, also attack to the beat, which you need consider when choosing your best course of action. In fact, the only thing that doesn’t rely on rhythm is basic movement. 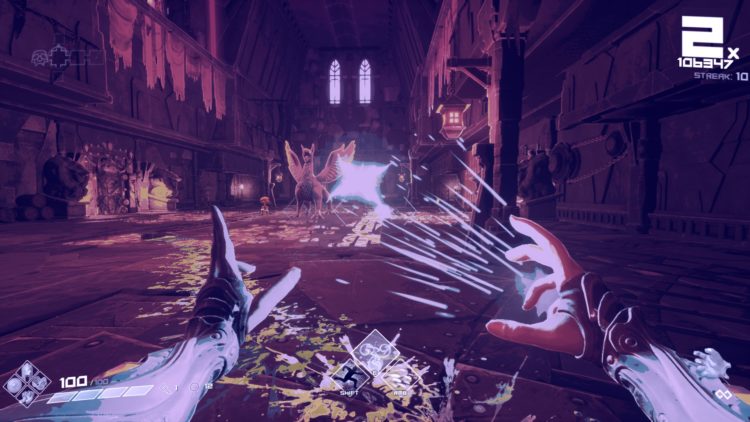 The game has a cast of five unlockable Valkyries, each with their own default weapon, abilities, and quirks. Freyr, for example, begins the game with 150 armor, which can’t be regenerated like standard health, and a powerful revolver. Any starting advantages and disadvantages are quickly forgotten as you clear rooms and acquire gear and stat buffs. Each Valkyrie has four gear slots: head, shield, hands, and feet. No item in the game changes the outcome of a run like gear, and it’s the usual suspects every time. While certain pieces can prove invaluable if you’re lucky enough to have a certain gear combination, some of incredibly powerful on their own.

Not a single one of my winning runs has been without one of these prized pieces. Buffs like infinite ammo, double damage, double shots, and others are game-changing all by their lonesome. Also scattered around every stage are shrines to offer up gold coins and keys to for incremental trait improvements, including damage, speed, range, and luck. Luck is especially crucial, seeing as it determines your chances of getting one of these godly items.

BPM: Bullets Per Minute has two difficulties: easy and hard. Quick access to overpowered builds makes easy mode a complete cakewalk beyond your first couple runs. Of course, it’s the easy mode, but hard mode is another beast. Bosses are fitted with rhythm-based attacks that test your knowledge of the game’s mechanics, but easy mode trivialized this. Becoming an overpowered killing machine plays into the power trip, but it doesn’t train you for the challenges to come. On a few occasions, I downed the final boss before it even got off its pedestal. I would love to see a normal mode bridge the gap. 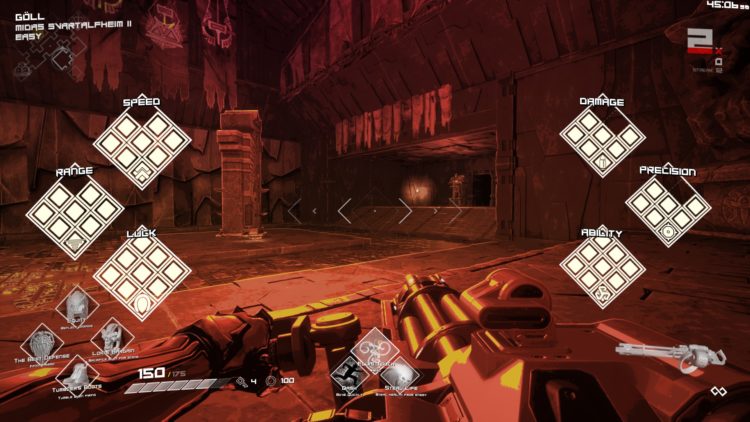 You could say I’ve been taking my vitamins.

The stages of BPM: Bullets Per Minute get increasingly trickier to navigate. Earlier stages feature flat rooms with limited obstruction and populated with less-varied enemy types. However, hard mode will throw in curveballs right out the gate in regards to enemy variety. Latter stages spotlight smaller platforms, wide gaps, and more diverse enemies to encourage more evasive and aggressive action. Each stage draws from a limited pool of rooms and enemies, however. This in tandem with the less-than-stellar item pool of varying quality means that the game’s potential for new, emergent scenarios is a touch lower.

Like your typical rogue-like, you move from room to room clearing out enemies and claiming their spoils. Every room clear rewards you with a single chest, which rewards you with coins, trait buffs, keys, health, and gear. Special rooms are the source of most of your boons, if you’re willing to pay the price. The merchant and blacksmith have gear, heals, and weapons for sale. Libraries and chest rooms hold inside abilities and items, provided you have a key to unlock the door. BPM: Bullets Per Minute also has a bank that lets you deposit gold to fund future runs. The game has its rogue-like basics covered, but there’s nothing particularly novel. It very much relies on its moment-to-moment, beat-driven gunplay to elevate the experience.

The bulk of your time will likely be spent throwing yourself at hard mode and working on those clear streaks. Speedrunners and high-score hunters need not worry, the game is practically built for them. A side helping of challenge modes also adds some more flavor to the mix, but they come in varying degrees of quality as well. Supertime locks player and enemy movement to the beat — a more familiar experience for Crypt of the Necrodancer players. Retro, on the other hand, pixelates the entire game, making it ungodly hard to see anything. Full auto removes rhythm all together, for a much less interesting experience. Many of the modes are enjoyable for their novelty, but have none of the staying power of the core experience. 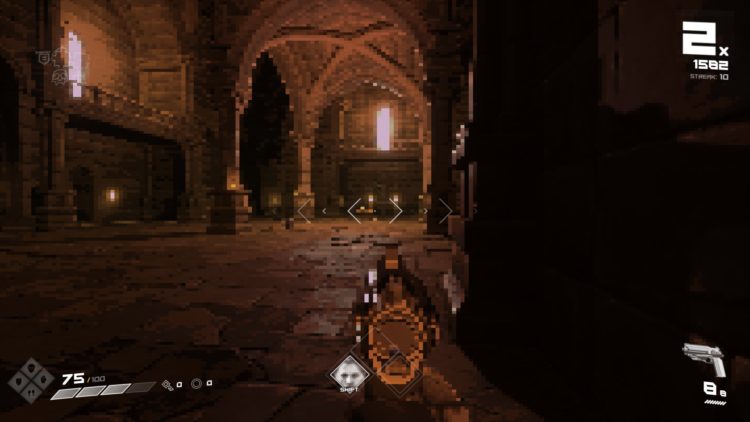 Find the enemies on the screen.

While BPM: Bullets Per Minute doesn’t excel as a rogue-like, its rhythm-based shooting adds enough spice to carry the experience. It successfully blends its killer audio with frenetic gameplay to create the euphoric feeling of play it was after. It still lacks the refinement of both Doom and its modern musical contemporaries, but there’s no denying it’s an incredibly visceral, heart-pounding experience.

An unrefined rogue-like, but a hell of a rhythm shooter. A killer soundtrack and some striking visuals blend beautifully with frenetic shooting to produce pure adrenaline.

How to complete the Fortnite ‘Event of the Year’ secret challenge