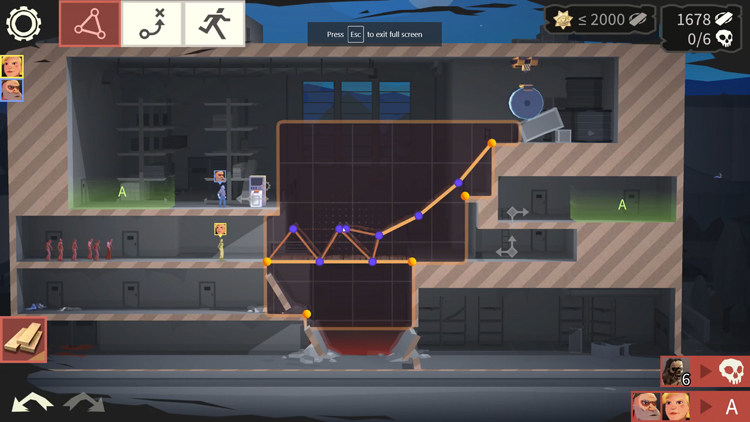 Personally, when I watch shows about idiots failing to survive a zombie apocalypse, I always say to myself, “man, if only I could construct bridges in this universe.” Bridge Constructor: The Walking Dead is set to make this totally real dream of mine come true. And now, thanks to a brand new video that debuted today, I have a more clear idea of how Bridge Constructor will work with zombies slapped into it. Otherwise, it would be truly impossible to imagine.

The video went up alongside the game’s announcement at ONL 2020, hosted by none other than Geoff Keighley. Headup, the publisher of Bridge Constructor: The Walking Dead has teamed up with Kenny “Drae”, a “content creator” that I absolutely didn’t have to Google. Drae is apparently a Canadian YouTuber, so that’s great for whoever watches his videos, I guess. The video features unedited footage of the game and shows off, well, bridge building. That’s what you do in these games.

As you can clearly see, Bridge Constructor: The Walking Dead is a Bridge Constructor game with zombies and The Walking Dead characters. Players can expect to see Eugene, Daryl, and Michonne while they construct bridges for them to cross while zombies walk around and probably try to eat them or something. In the thumbnail below, they’re chasing a car over a bridge. Exciting stuff. The game does appear to have some different mechanics at least, as the video shows hordes of zombies getting blown up by exploding barrels. Those two go together like thing A and thing B. I’m the best at comparisons.

No exact release date has been announced for Bridge Constructor: The Walking Dead, but it’s expected by the end of the year. You can already add it to your Steam wishlist or keep tabs on it on the glut of other platforms it’s releasing on. That including consoles, phones, toasters, glasses of water, and specially-branded Swamp Thing LCD games from 1993. I might have made some of those up.