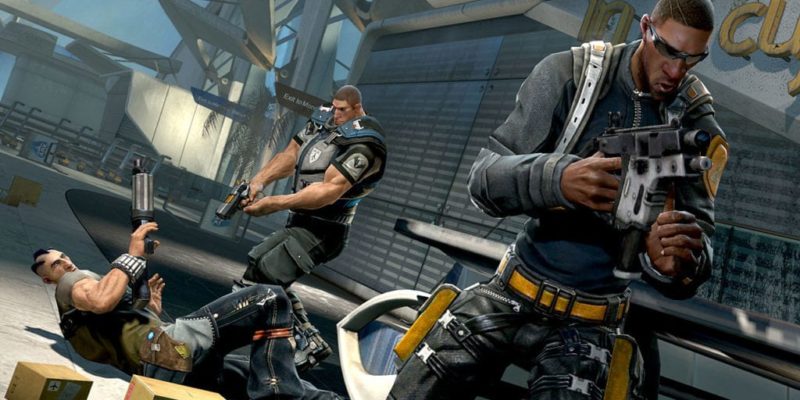 Successful first-person shooters tend to follow a strict formula nowadays. They should concentrate on multiplayer at least as much as single-player, they should be a sequel, their campaign should be suffocating-ly linear and they shouldn’t try to deviate too much from the status quo. Follow three of those four rules and (so long as you include the multiplayer element), so long as your production values are sufficient, you’ll be laughing all the way to the bank.

Of course, the smart alecs out there will be saying that Borderlands doesn’t follow that formula and that was successful. Halo doesn’t follow that formula and that’s successful. Well, Borderlands isn’t a full-fledged first-person shooter and Halo well, Halo is Halo.
Brink disregards the formula with near-reckless abandon. Essentially, there is no single-player. It’s not a sequel. The words ‘linearity’ or ‘open-world’ cannot even be properly attached to it and it deviates from the status quo to the point where it’s near unrecognisable from the recent chart topping, grenade-chucking, red dot sight attaching clones doing the rounds as we speak.

Brink is The Ark. The Ark is Brink. Brink’s future dystopia setting is as important an element as anything else it packs within and around its gun-toting sleeves. A self-sufficient, environmentally friendly floating island utopia gone wrong, The Ark is home to two major factions.
The Resistance want to flee The Ark and make their way make to the mainland through a series of terrorist acts designed to disrupt the island further (a mainland they haven’t had contact with since an environmental disaster severed communications), while the Security want to restore The Ark to its original glory – a restoration that, in their eyes, can only be carried out by strict control of the population and the remaining food and water.

In a classic case of moral ambiguity (perhaps you say realism), there is no good guy and there is no bad guy. There are merely different ways of looking at and approaching a bad situation.

The approach to gameplay is equally open to interpretation. In short, it’s a team based setup in which you take allegiance with one of the two factions and work through the campaign to a fitting resolution – a resolution that changes depending on which side of the coin you’ve plumped for. The catch is that your eight-man team is populated with human players, as are (so long as you’ve allowed it in the matchmaking options) the opposition. Essentially, your team is playing through one faction’s campaign as your opposition plays through the other.

The option to play with and against bots exists but the magic is lost almost entirely by sticking to offline matches. In all honesty, if you’re not ready to play online all the time do not bother jumping into the fray.

For those up for the online plunge Brink offers a multiplayer experience brimming with personality, charm and detail; each of the campaign missions require the completion of three to four interlinked objectives. These range from simple protect-this or destroy-that to more complex hack-this and then transport-that.

In many instances objectives can only be accessed by completing the one preceeding it, meaning it’s possible to achieve victory after the first objective depending on which side you play as i.e. if you stop the Resistance from breaching the Security stronghold in the allotted time then they can’t steal the data they’re after. Game over. Security wins.

Brink is team-based in the truest sense. If you don’t work as a team you will lose, simple. Kill/death ratio and accuracy percentage mean next to nothing on The Ark. To complete objectives teams must divide themselves intelligently into the four different classes as specific tasks can only be completed by a certain character type.

Four types: medic, soldier, engineer and operative. In simple terms engineers repair stuff, operatives hack stuff and soldiers blow stuff up. Medics tend not to have such a direct influence in terms of completing objectives but are essential in keeping the squad on their feet – constantly re-spawning at the designated spawn points is a sure-fire way to lose a mission thanks to endless tracking back to the action.

Classes have their own special abilities to aid themselves and those around them. Medics can heal and ‘buff’ (read: increase) health. Soldiers carry numerous ammo clips with which to keep everyone loaded with lead. Engineers can increase weapon damage. Operatives can take on the appearance of a fallen enemy. Further skills can be unlocked as you progress through the ranks, both those that are unique to a specific class and those which are universal across them all (extra health, the ability to fire while ‘downed’ et al).

Customisation is layered upon further by the selection of a body type – light, medium or heavy. Unsurprisingly, light players are fast but die easily and cannot carry heavy weapons, heavy types can carry all weapons and take more damage but are slow and medium types occupy a middle ground of average speed and average weapon availability. A similar level of customisation can be applied to your character’s appearance, leading to some wonderful looking designs thanks to the cartoony, TimeSplitters-esque visual approach.
Experimentation can lead to some great setups. A heavy/medic class, for example is essentially a bullet-sponge that can get stuck into the action and throw health packs around willy-nilly without worrying about a single-shot death. A light/operative is useful for getting to objectives quickly and starting a hack in peace.

Still, just to re-iterate, no matter how powerful your class is, the key is team work. Two skilled teams going head to head will likely lead to some genuinely memorable back and forth struggles for control of the diverse, maze-like maps and the various objectives contained therein.

It’s that emphasis on team work that makes Brink so enjoyable. It’s also what can make it so frustrating. Unless you’re playing alongside others that are prepared to work together, sacrifice their own personal score for the sake of the team and listen to reason, missions can feel like slow, prolonged torture inflicted by a particularly cruel and creative sadist.

This co-op element is likely going to be a huge sticking point for much of the audience, as I estimate that the majority of us do not have seven friends (either ‘real’ or ‘virtual’) prepared to play on a regular/semi-regular basis. As we all know from years of multiplayer experience, public games are hit or miss with a strong emphasis on the miss. One bad game of this sort tastes sour, a few bad games in succession tastes positivity bitter. It’s unfair to mark the game down based on a negative point that’s largely beyond Splash Damage’s control, but the fact remains that’s still a negative.