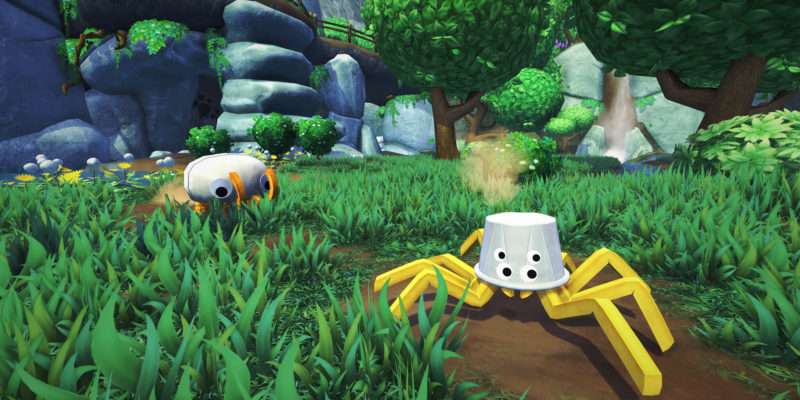 The mere presence of Bugsnax in the next generation’s starting lineup is sure to furrow a few brows. Between the Kero Kero Bonito theme and theories of a horror-ific twist, I didn’t know where to place my expectations. My sole expectation going into Bugsnax was that any I had would be completely and utterly eviscerated. In a way, I was right. Young Horses’ latest and craziest is no child-exclusive time sink, nor is it a mind-boggling psychological thrill ride.

It is very much a casual and competent adventure, with only the slightest sprinkle of deception. In lieu of a genre-bending, jaw-dropping twist, Bugsnax features consistent systems and a fun, fixed gameplay loop. It’s bursting with creativity, reflected in its diverse cast of characters and the Bugsnax you encounter. If anything, the game is a showcase of the imaginative game design that’ll lead indie games into the future.

After sinking eight hours into Bugsnax, completing its story, and diving deep into its side quest selection, I can safely say that the game is pure, stupid fun. It’s cheery and colorful with a healthy array of themed zones. The drab lighting dulls the look, but doesn’t take too much away from an otherwise cohesive, uplifting visual style. Its visuals don’t scream “next-generation,” but watching the lively, animated Grumpuses and Bugsnax puts a huge smile on my face. Listening to them banter and make their cute Bugsnax sounds even more so.

One of the bigger surprises is how strong the game’s writing is. The humor is bound to extract a few chuckles out of any player. Bugsnax is no slouch in the voice acting department either, with decent performances all around, including Yuri Lowenthal as Chandlo. The character and exploration-driven narrative is certainly one of the game’s highlights. Everything contributes to a playful atmosphere that evokes a certain childlike sense of wonder that I absolutely adore in games.

Donning the press hat of the Bugsnax’s protagonist, you sail to Snaktooth Island at the behest of Lizbert, an adventurer. Lizbert and their motley crew of intrepid (or not) explorers have made the greatest discovery in the history of Grumpus-kind. On Snaktooth Island resides a plethora of Bugsnax species — tasty half-bug, half-snack critters with unique properties. Upon consuming a Bugsnax, a Grumpus’ body parts take on the characteristics of that Bugsnax. 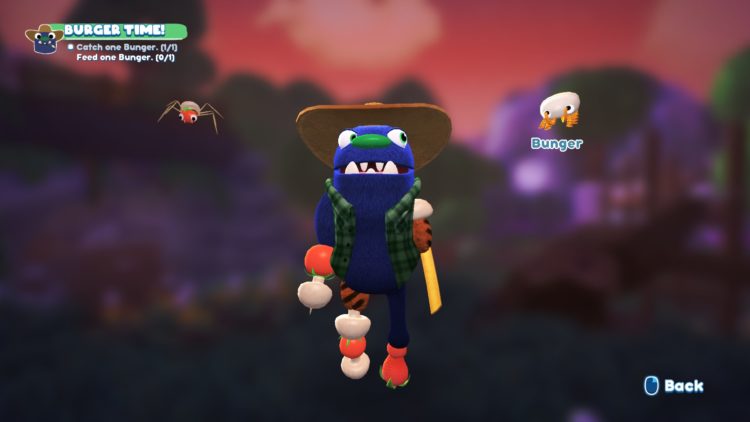 You are what you eat.

The thrill of the hunt

While this becomes a prominent narrative device in the game, the gameplay is oriented around hunting the critters. Upon your arrival, the citizens of Snaxburg, the island’s hub, are looking the worse for wear. Lizbert and their partner Eggabell have been missing, and the lack of leadership has done a number on the town’s morale. To get the scoop you need, you have to round up all of the citizens and piece together the mystery of Lizbert’s disappearance. To that end, you’ll scan, wrangle, attack, and capture all manner of Bugsnax.

The hunt for Bugsnax begins in one of the game’s eight distinct zones. Each one features a host of new environmental considerations and prey. Different Bugsnax appear in different zones, and at different times of the day in said zones. Your journal aggregates all Bugsnax-related information, and looking at it, the sheer variety on display is immense. The next step is to scan the Bugsnax with your camera, revealing their exploitable behaviors. Some are challenging in that they’re difficult to locate, others because they require the stars to align to create the right conditions for their capture.

As the Snaxburg’s citizens become aware of your contributions, you’ll be rewarded with additional tools to capture Bugsnax. The placeable trap imprisons Bugsnax for you to collect, and is your primary tool for the majority of the game. But most critters are wary of your intentions, meaning you’ll need to find ways to lure them out. The slingshot takes a variety of “toppings,” all of which attract/provoke certain Bugsnax. You could, for example, shoot some chocolate syrup by your trap to lure in your prey. Alternatively, some aggressive Bugsnax will knock out a Bugsnax coated in a certain topping for you to easily collect. 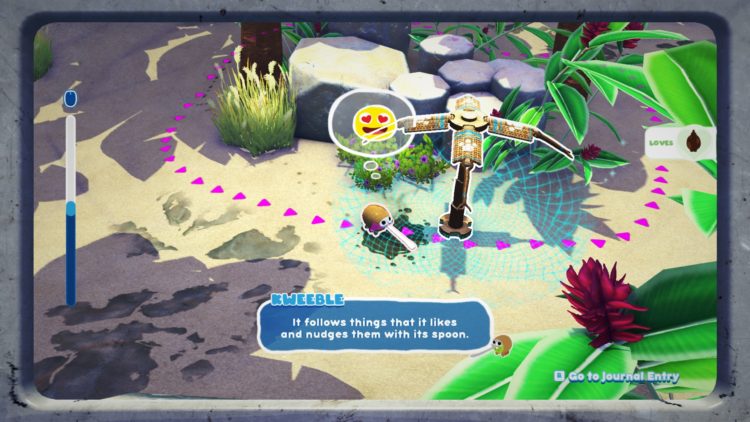 Looks can be deceiving.

Tricks of the trade

Other gadgets like the grapple and the tripline can be used in tandem with other tools to snag Bugsnax. Each new species is a new puzzle you’ll need to solve. Using your tools, the environment, and knowledge of Bugsnax and their interplay is the key to a successful hunt. The game promotes multiple unique approaches, and offers new strategies in a steady stream. The Big Bopsicle will stun itself if you bait it into charging at a hard obstacle. Additionally, you can exhaust it, causing it to break into two Bopsicles that can be easily scooped up. There was always something new to teach, and I was always ready to learn.

Of course, with the wealth of tools at your disposal towards the endgame, many puzzles can be broken using brute force. Many of the game’s challenges are trivialized, encouraging you to look instead to the bigger targets. Bugsnax is more of a relaxing, casual experience than it is a challenging head-scratcher. It threw enough at me to exercise my brain, but nothing had me stumped or frustrated. I do wish, however, that the game’s mechanics saw further exploration given their potential. 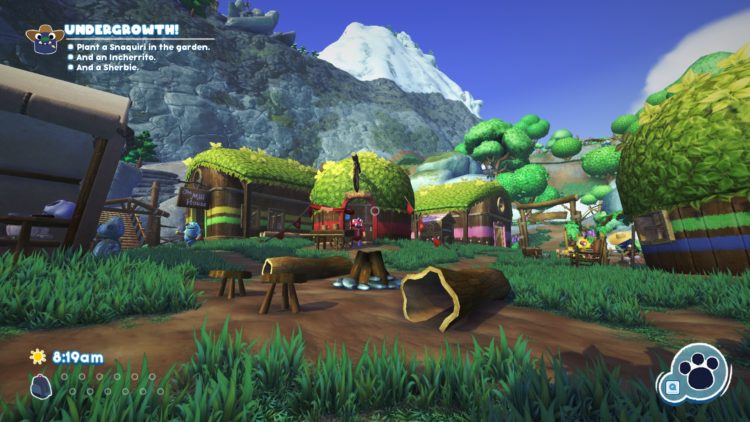 Another great day in Snaxburg.

Home is where the heart is

The main questline is undoubtedly where the meat of the game lies. Exploration is inextricably tied to the context of the main storyline. By fulfilling characters’ requests and encouraging them to return to Snaxburg, you unlock the opportunity to interview them for information. With new information comes new secrets and zones to search for Lizbert. Bugsnax’s side quests offer more hunts to indulge in. The overwhelming majority of side quests boil down to gathering missions, and practically no other rewards. Certain characters reward you with boons like increased Bugsnax carrying capacity, but the rest only offer words of gratitude.

What you’re rewarded with instead are impressive, albeit cliché, character arcs. The attention to characterization is another surprise; strong characters on top of Bugsnax hijinks weren’t something I expected to see on the menu. Every character gives you a reason to learn their name and care for their wellbeing by the end. They may all be trope-y, dopey archetypes, but they are no less significant to the experience. And, with your army of Bugsnax, you can customize each character to personalize your own experience. It’s sure to add that extra little kick to your adventure. 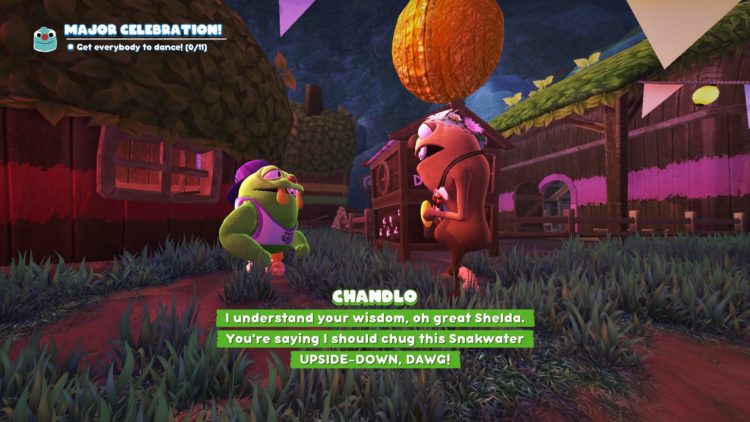 Grumpuses are the real animals.

Ultimately, Bugsnax has the most to offer to ardent collectors. Filling up the bestiary is the end goal of the game, and not a goal most would dedicate their time to. After its biggest secrets have been unearthed, there’s little left to keep players interested. And despite some valiant attempts at more emergent gameplay through its systems, I personally have no desire to replay the game. Still, I valued my time with it. It gave me something I wasn’t at all expecting, but I had a blast playing it.

Bugsnax is far from a subversive gaming experience, but equally far from an adult-proof digital plaything. It finds a place for itself somewhere in the middle. It’s a solid product with intriguing gameplay and characters that are more interesting than they have any right to be. Bugsnax is a good indie game with a good developer behind it — it’s as simple as that. 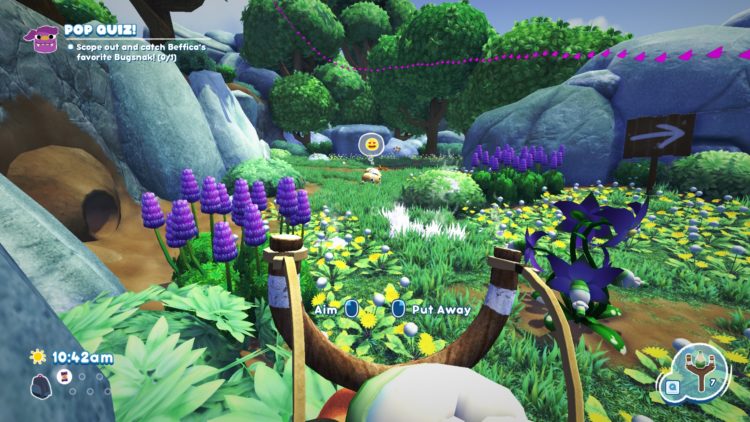 The apex predator stalks its prey.

In lieu of what many community theories predicted is a cute and casual adventuring experience with an adorkable cast of Grumpuses and Bugsnax. But all that being said, Bugsnax isn't without its tricks.

By Kurt Perry19 hours ago
Reviews