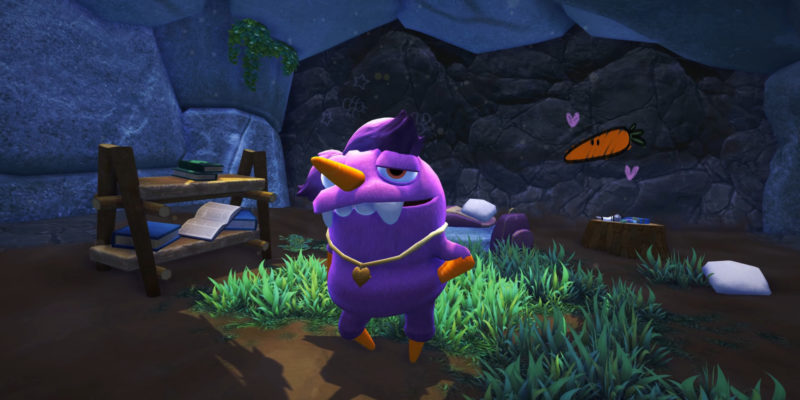 Buzz, buzz! The whimsical adventure game Bugsnax is getting a new home on PC later next year, opening up the hives for a brand new audience. Studio Young Horses (developers of the infamous Octodad) is sending Bugsnax to Steam, giving PC players another option.

Originally released on PlayStation 4 and PlayStation 5, this first-person adventure sees players traversing through a mysterious island, Snaktooth. Players can find and capture different species of “Bugsnax,” who are then fed to “Grumpuses,” the dominant species who transform based on what bug they eat. Sprinkled within the bug-catching mechanics is a surprisingly elaborate narrative with heavy attention towards the characters.

Players control an unnamed journalist (of course, tasked with catching bugs), clued in on the mysterious Snaktooth island based on notes from Lizbert Megafig, a former explorer. But once you arrive at the island, you find that she’s missing and all the other Grumpuses have left. By catching more and more Bugsnax, you’ll attract other Grumpuses back to the island and solve the mystery of Lizberg’s disappearance.

Bugsnax is already available on PC through the Epic Games Store, but its arrival on Steam should at least draw some attention towards this charming indie game. If nothing else, Creative Director Kevin Zuhn seems to be teasing some more Bugsnax news to come at a later date.

“We’re buzzing with excitement to serve up Bugsnax to a new audience on Steam!” said Zuhn. “We’ll have some meaty news and a few juicy surprises to get people talkin’ bout Bugsnax again later this year.”

Bugsnax on Steam currently has a tentative release date of 2022. The Steam page is now live, so interested players can go ahead and wishlist the game. If you need a little more convincing, you can check out the gameplay trailer below:

Date your weapon in Boyfriend Dungeon, out on PC storefronts and Game Pass