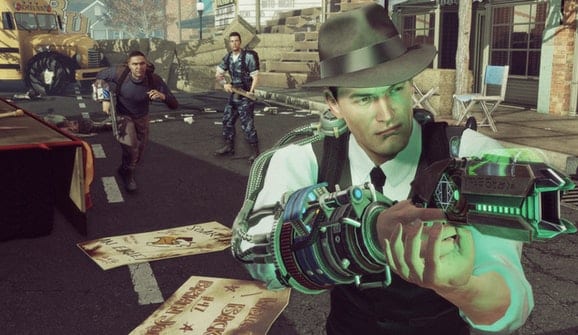 If you want a very easy way to play the flawed but also sort of interesting The Bureau: XCOM Declassified, the Humble Store has it for free. It’ll be free for the next 46-ish hours (at the time of writing).

Usual story with Humble giveaways. You’ll need a (free) account with them, and you’ll need to allow the Humble Store to have a brief hook-up with your Steam account. Other than that, The Bureau: XCOM Declassified can be all yours for no money.

It’s an odd game with a pretty troubled backstory. When it was first announced in 2010 (before the Firaxis reboots of the series), it was the poster child for ‘why are you making XCOM a third-person shooter when we all want another turn-based strategy game?’ It then became an example of protracted and difficult development, handed around studios at 2K and undergoing multiple redesigns. Ultimately, the game didn’t come out until mid-2013.

By that time the Firaxis XCOM: Enemy Unknown had been released (late 2012) and the people who wanted another turn-based XCOM were relatively happy. The Bureau: XCOM Declassified ended up as a curiosity with a pretty decent 1960s setting, a very mixed Mass Effect-ish squad command system, alongside a plot and mission structures which said ‘hello, yes, this game had a very difficult development’.

I thought it was … okay (this review is old so the images are broken, but you get the idea).

By Jake Su7 mins ago
Industry