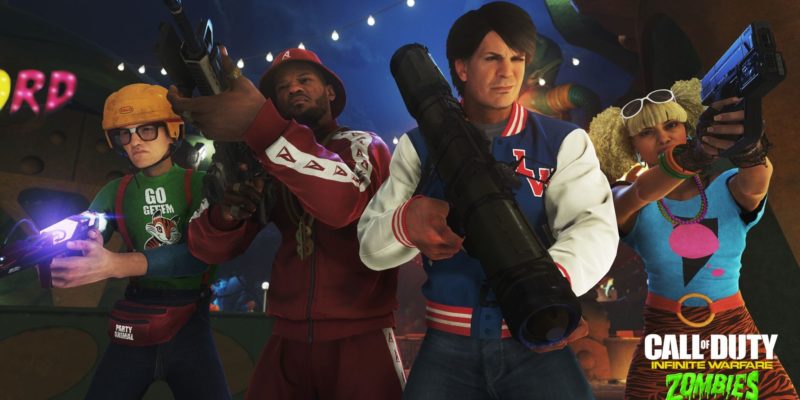 As is now basically expected of every other Call of Duty title, Call of Duty: Infinite Warfare has a zombies mode. Announced today, Zombies in Spaceland has a fairly bizarre set-up.

Movie director Willard Wyler (voiced by Paul ‘Pee-Wee Herman’ Reubens) has lured four aspiring actors to a movie theater with the promise of an audition. Except the movie lot is actually full of zombies, and Wyler is just going to film the actors fighting zombies and turn that into his movie. He’s obviously nuts, so I suppose it’s not worth informing him that this will result in a terrible film.

It’s not entirely clear if this is all based in the 1980s, or whether it’s just the film-set itself (an 80s space-themed amusement park) that’s the period piece. It probably doesn’t matter. Oh, and David Hasselhoff is in there as an “enigmatic DJ” who will help our co-op team out in some way.

The foursome of actors are playing the roles of “the jock, the nerd, the valley girl and the rapper”. Both zombies and the 1980s have been pretty thoroughly done to death in recent times, so it’ll take something fairly spectacular for Call of Duty: Infinite Warfare to breathe some (ironic) life into that combination.