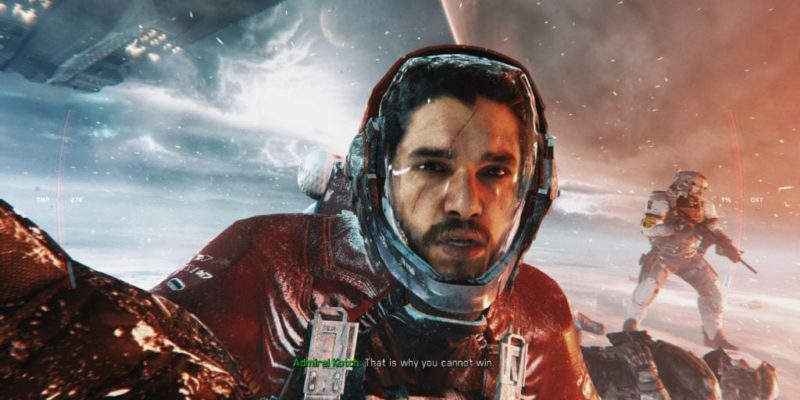 (FULL DISCLOSURE: A friend of mine is employed by one of the companies that had something to do with Call of Duty: Modern Warfare Remastered. I’m not looking at that, but nonetheless I’m not going to be fully reviewing any Call of Duty game because there’s a fairly obvious ethical issue there. I figure a largely objective tech review of this newest iteration might not be too bad, and I don’t believe the aforementioned relationship has consciously skewed my opinion in any way, but if you feel this piece can’t be trusted because of these reasons… well, that’s your prerogative and I quite understand. That’s the point of this disclosure, after all: to let you make your own mind up.)

Some things just happen every year. You file your taxes. You have a birthday. You celebrate some form of holiday. A new Call of Duty game is released. Honestly, this stuff is relentless. Gets a bit wearying, doesn’t it?

Call of Duty: Infinite Warfare is definitely a Call of Duty game. It’s bombastic, explosive, ludicrously pretty, and full of dialogue that made me roll my eyes so hard I nearly got a concussion. And that’s only the first two missions. So! Let’s have a look at the options, eh? 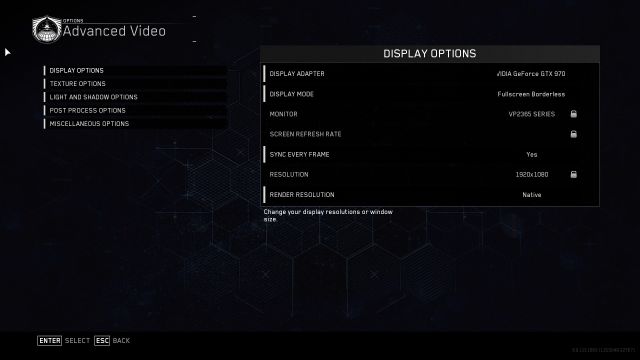 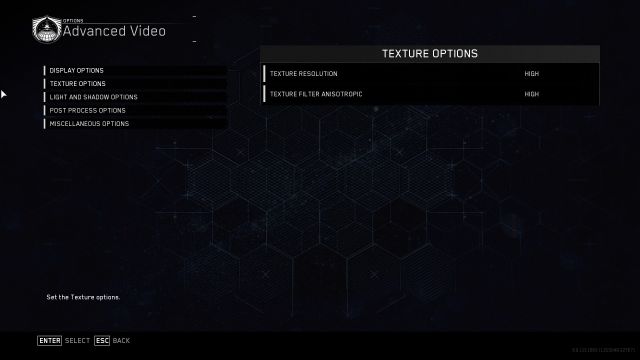 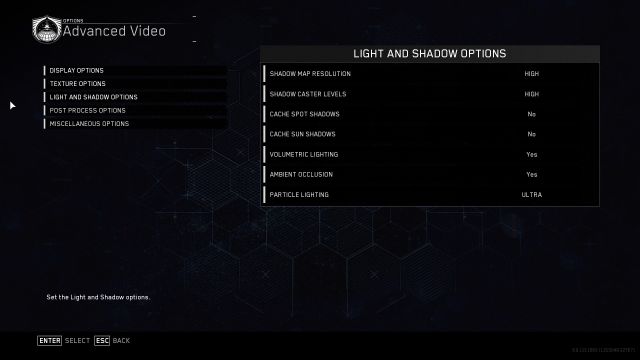 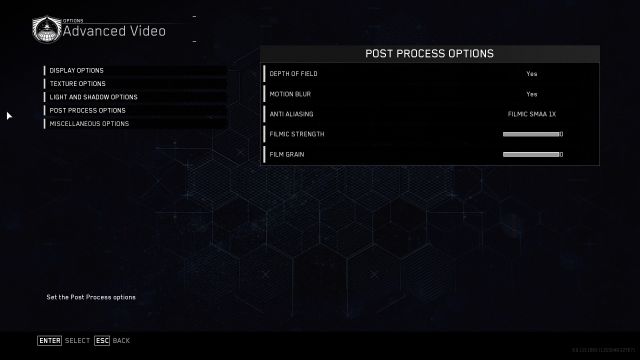 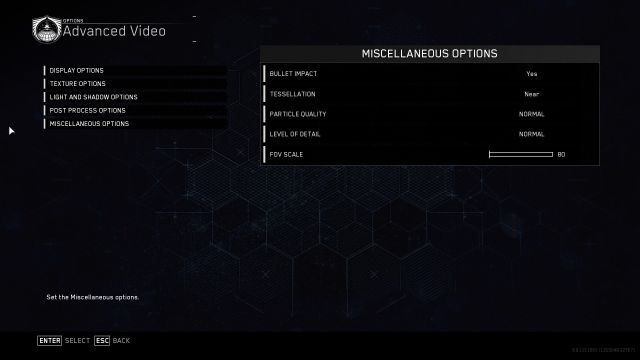 First: yes, it supports 3840×2160, so that’s nice. Second: yes, you can turn off both voice chat and text chat for multiplayer, which immediately removes one of the biggest problems with this franchise.

Aside from that, we’re apparently looking at the usual: the options aren’t too bad, and they cover most of the worst offenders and offer up a few nice touches. Motion Blur and Depth of Field can both be disabled (praise the deities) and there are some decent descriptions of what each options does when you mouse over them. On the downside, there aren’t that many options that should seriously impact performance; I imagine Texture Resolution is the really big one there. 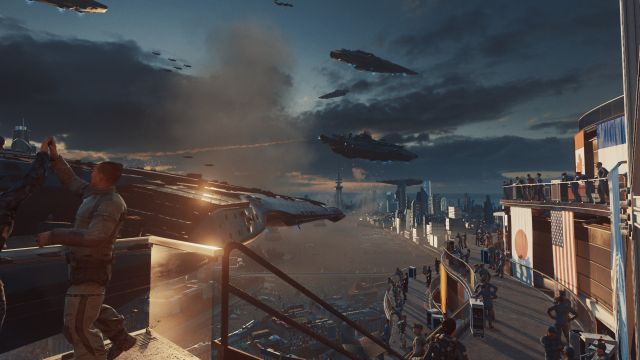 I feel like I should point out that this isn’t a promo shot – this is actually in-game.

While Infinite Warfare itself runs at a full 60 FPS, the pre-rendered cutscenes are limited to 30 FPS and the difference between the two is a little jarring. Also, while I say the game runs at a full 60 FPS, I have encountered some slowdown on my i7-3820 / 16 GB RAM / GeForce GTX 970. Nothing hugely problematic (one particular – and heavily cinematic – scene in the second mission dropped it down into the high 40s for a few seconds) but this would tend to imply that I’m going to have to drop the details a little bit from what you see in these screenshots in order to get a constant, permanent 60 FPS. I can’t say whether or not it’ll cause a problem in any actual action scenes a bit later on, though, as I haven’t played nearly enough to comment. I’m happy enough to stick with what’s on display there unless it actually starts impacting important gameplay stuff.

I don’t have too many comparison screenshots because switching the texture resolution requires a full restart of the game, but here are a few from various segments of the game’s second mission. You can use these to get a vague idea of how the game looks on its near-highest settings, as well as its near-lowest. 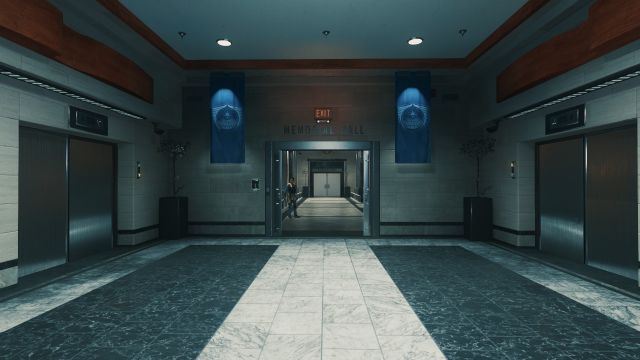 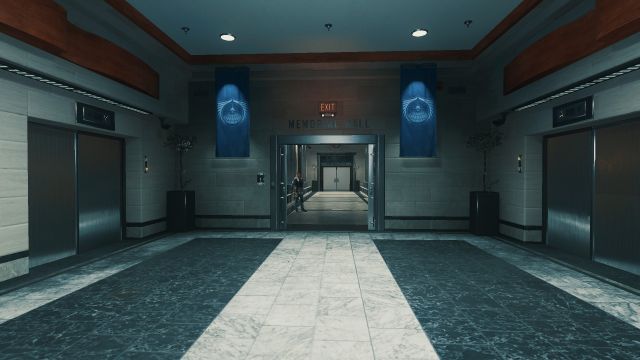 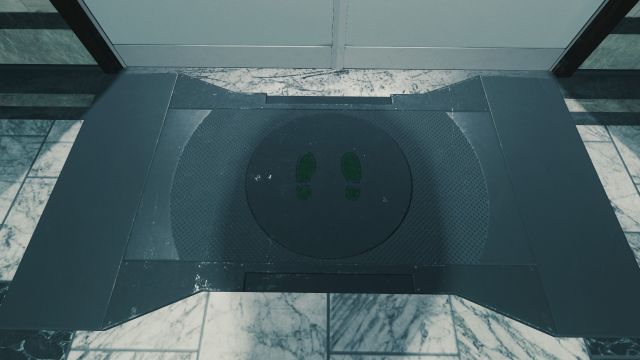 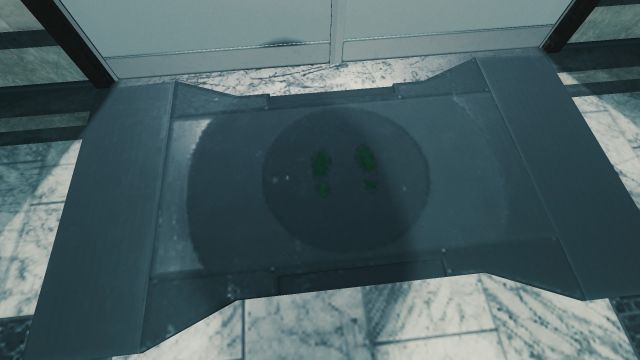 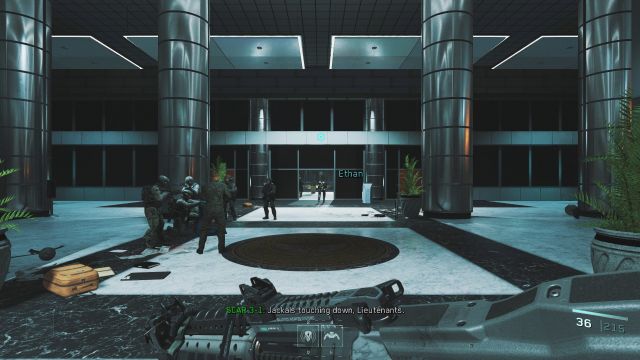 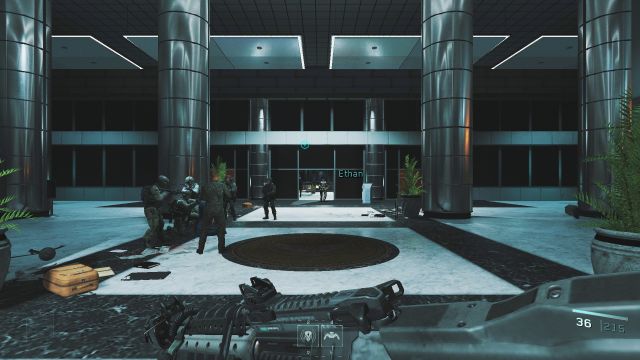 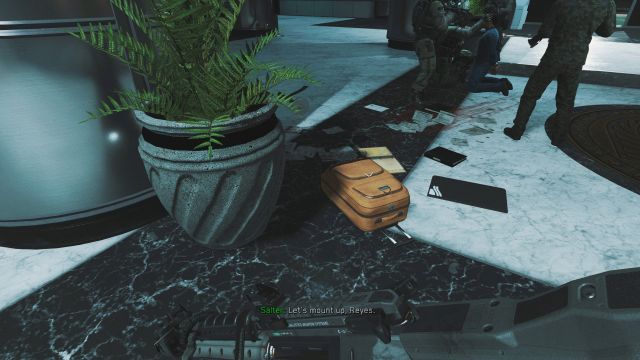 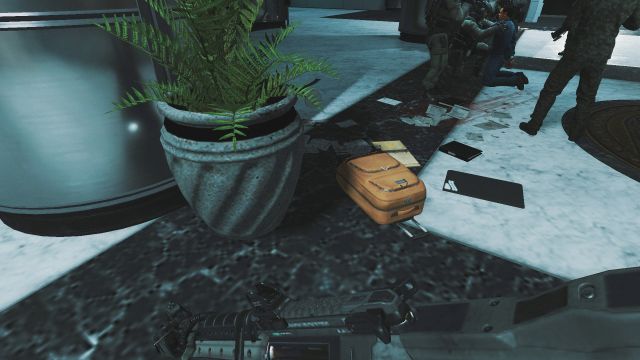 There isn’t too much of a difference in settings (at least not in these quiet scenes) with one notable exception, which is the Texture Resolution. Lowering that makes things look utterly woeful when you’re within, uh… well, pretty much any sort of viewing distance, actually. Fortunately, the impact made by the rest isn’t too major by comparison, so they can be twiddled with a lot more easily.

Still, I should give Infinite Warfare some credit for its looks. From what I’ve seen it makes effective use of both scale and lighting to add atmosphere to things, and its big impressive scenes – of which there are many, because it’s a Call of Duty game and that is basically what they do – are actually big and impressive.

As you’d expect, it controls fine, too. Considering it’s a first-person shooter on the PC you’d hope this would be the case, but as Ghosts proved, it occasionally isn’t. Nonetheless, I’ve yet to see any bizarre prompts or weird default binding conflicts, and the default controls are pretty much the CoD standard with CTRL as a modifier for crouch and prone, F as your “use” key, middle mouse as grenades, etc. Not only that, but they’re thankfully pretty easy to redefine if you need to.

You know nothing, Jon Snow.

The one issue with this is that the controls in single-player don’t appear to carry over to multiplayer, which means you’ll have to rebind the bloody things twice. I don’t know if this goes for everything, though: I adjusted the mouse sensitivity in single-player but not multiplayer, and yet it seemed okay in both… yet I definitely had to rebind “press right mouse to toggle aim” to “hold right mouse to aim” both times.

Moving over to multiplayer, things get a little iffier. Don’t get me wrong: Infinite Warfare‘s multiplayer segment has given me no framerate issues, looks fine, plays fine, etc. But right now there are two issues.

First and foremost is the laughably boneheaded decision to separate Windows 10 Store users from Steam users because… reasons… which has split the player base into what I can only imagine are two vastly uneven segments. I can’t see this being in anyone’s best interest, frankly. 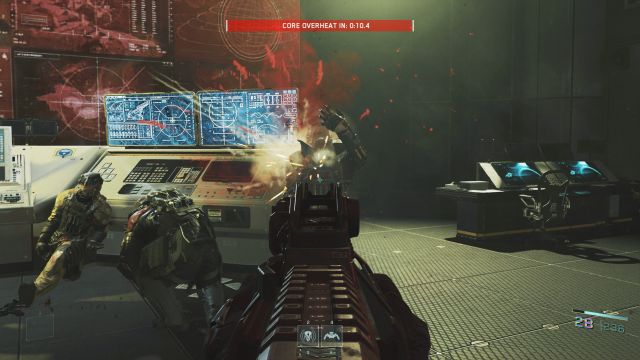 Oh, right. You do also shoot people. I should note that.

Second, which is possibly related, is that it’s taken me a surprisingly long amount of time to actually find matches. Not unplayably long, but getting into a simple game of Domination or Team Deathmatch took me around two minutes of queueing, which is considerably longer than I expected. This may be down to NAT issues (unlikely; I haven’t had this issue with other CoD games), or may be down to the split playerbase (also kind of unlikely; I’m playing on Steam). And no, there’s no server browser.

Maybe everyone’s just playing the single-player for now, or maybe it’s trying to be a bit more careful than usual with matching up players of the correct skill levels. If it’s trying to do the latter, though, it doesn’t currently seem to be doing a good job. The first game it dumped me into was a Domination match in which I had exactly one teammate, against a full enemy team. We lost quite badly. The second game I was put into, I joined exactly one second before the end of the match. We lost that one too, but I can at least confirm I had absolutely nothing to do with that one. The third game worked okay! It’s just that, factoring in queue times and waiting for that godawful first match play out, getting to said third game took me about ten minutes. 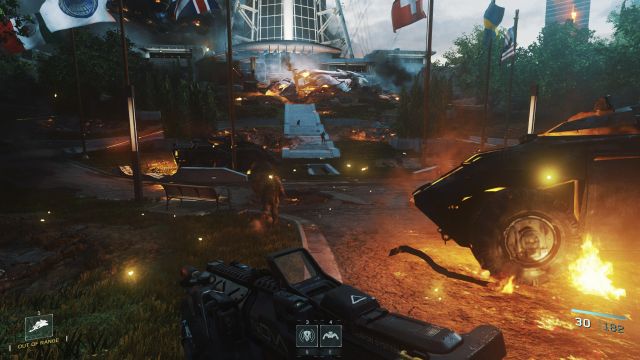 Again, the lighting does an awful lot for the game’s looks.

If I sound a bit down on Infinite Warfare… well, I probably am, at least a little. After the wonderful originality of Titanfall 2 it’s a little disheartening to play something that currently feels like Another Call of Duty Game. That’s not inherently bad, of course, and I haven’t played nearly enough of it to really comment on its quality. Equally, I’m not going to comment on its quality because of the disclosure at the beginning of this piece.

I suppose the upshot is that, yes, this is a fine enough PC port. It looks lovely, it mostly runs smoothly, and I haven’t hit any major roadblocks over the course of a couple of missions and a few bouts of multiplayer gunmanship. About the only area I’d really caution you to be wary of is the bizarre segregation between Windows Store and Steam users, because it’s way too early to tell what the ramifications of that are. As a technical piece of work though, I don’t think I really have much in the way of complaints.