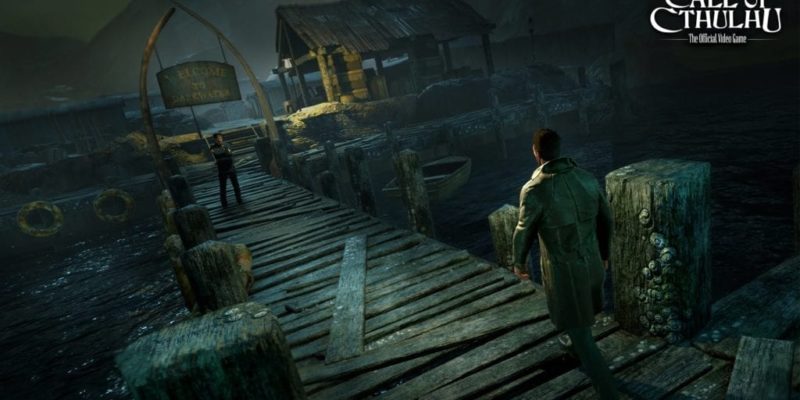 H.P. Lovecraft has been such an inspiration for so many games, from Quake to The Elder Scrolls. However, there have been curiously few video games that mention by name any of his creations. Call of Cthulhu: The Official Video Game sets out to right this wrong.

Focus Home Interactive and Cyanide have recently released a gameplay trailer introducing the game’s characters, mechanics, and world. You play as Edward Pierce, a private investigator with a history of alcohol abuse. The game is set on Darkwater Island, an obvious nod to the titular locale of Lovecraft’s “The Shadow over Innsmouth.” Your job is to investigate the suspicious deaths of the Hawkins family.

Call of Cthulhu is a first-person exploration game. You wander through the world, interacting with the environment and discovering clues to aid in progression. During a hostile encounter with a member of the town, it’s shown that you have options for dealing with other people. Calmly reasoning with the man is one choice, but attempting to convince him through violence is yet another. Stealth and subterfuge are also perfectly acceptable options.

You travel through various locations including a dusty mansion, as well as damp, dank caverns. Cultists fervently pray to their god, while your sanity is tested the further you delve into the mouth of madness. And what would a Lovecraft story be without a mind-twisting monstrosity, undescribable through the human tongue? As the creature pulls Edward under the water, the trailer ends.

Call of Cthulhu is slated for release later this year on October 30. What’s here is extremely promising. But what H.P. Lovecraft himself knew was how the most terrifying things were the subtle horrors; the things hidden just under the skin of normal society. Hopefully, Cyanide understands this and give the lore the type of journey it deserves.

The next DLC for Kingdom Come: Deliverance is all about your bro Hans Capon

By Michael Kloos19 hours ago
Industry