Well, I already like Call of Duty: Advanced Warfare more than Ghosts. I’ll grant you that isn’t saying much, being that Ghosts was an entirely run-of-the-mill Call of Duty game that didn’t so much run on PCs as it did limp, with a painfully stupid single-player campaign and a multiplayer mode crippled by the sort of horrible netcode that could make a 56k modem beep out a swear word in morse code. As such, it’s not like “better than Ghosts” is the sort of tagline anyone should actually want to slap on a box.

With that in mind, there are probably three things that need to be addressed. First: how are the options? Second: how is the single-player? Third: how is the netcode? 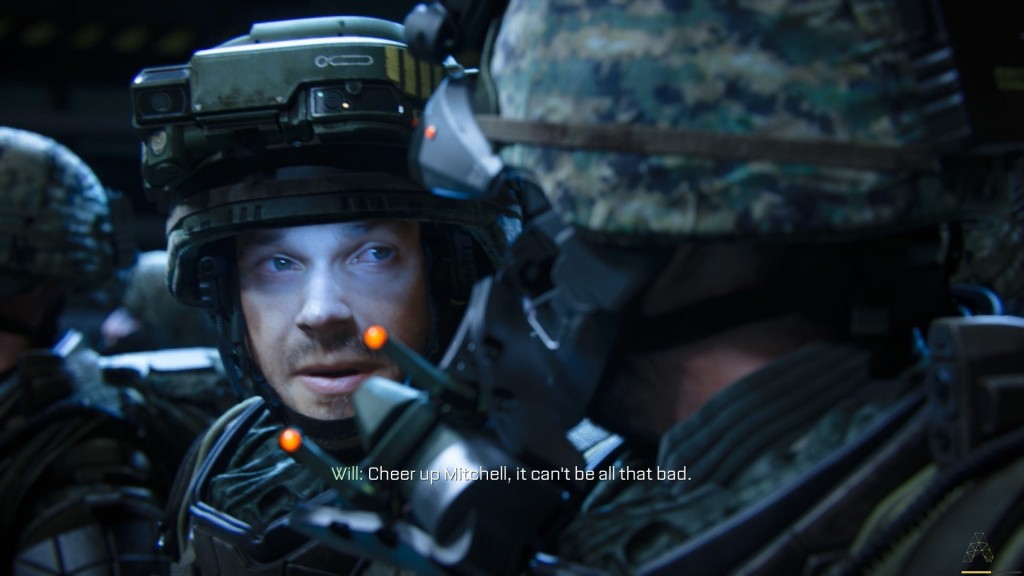 Let’s start with the easy one. The graphical options are actually pretty damn good, insofar as there are lots of them, and the menu actually takes pains to either explain what they are, or what sort of impact they’re going to have on your system. For instance! Subsurface scattering is described as “simulation of light transport through semi-translucent materials”, which actually makes a degree of sense. “Cache spot shadow maps” comes with the warning that this will result in “faster rendering, but requires more video memory.” And so on.

I’ve said it before and I’ll doubtless say it again, but I really approve of this. I like my tweakable graphical options; I like being able to turn on Herbaderba Super Processed Filtering to see what impact it has on my visuals and on my hardware. But I really like it when the menu actually tells me what this stuff does.

I am less enamoured with the fact that the much-vaunted FOV slider is only present in multiplayer, which is somehow both completely inexplicable, and totally understandable. See, multiplayer is the area of the game where FOV is likely to create an advantage for some players – if you’re running in a higher FOV you can generally see more of the screen. So it seems odd that the ultra-competitive Call of Duty multiplayer would be the one place where your visual settings can give you an advantage. 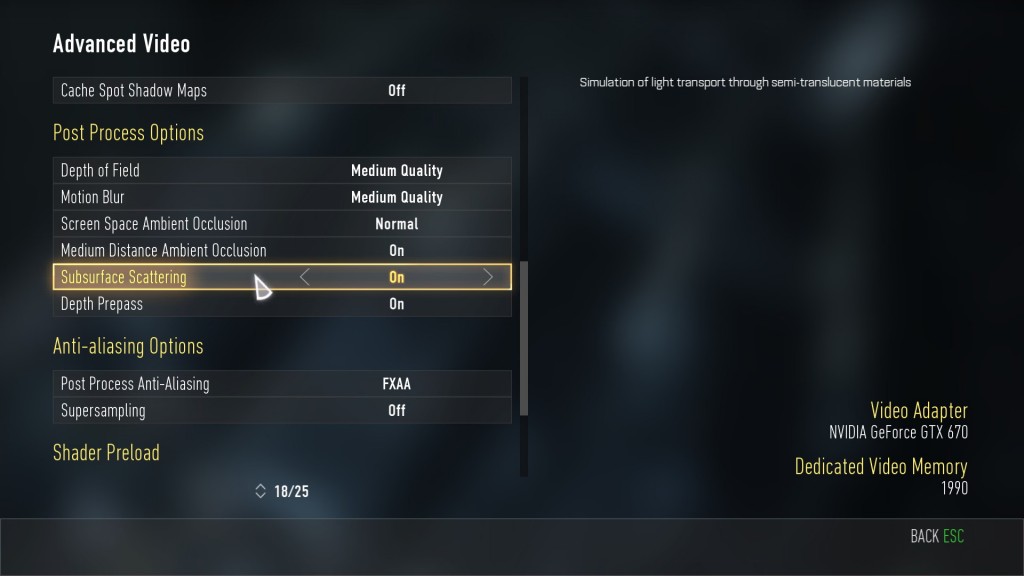 I wholeheartedly approve of games actually detailing what the hell half of these options do, or at least telling me how badly they’re going to shaft my hardware.

On the other hand, single-player games use what’s just out of sight of the player to spawn and despawn models and the like. When a plane flies in overhead, it hasn’t actually flown in from miles away; it’s been spawned out of view and then you see it fly in. With an FOV higher than the game expects, you can often see these things spawn in or out, or see visual effects ending in places they shouldn’t.

In something as absurdly cinematic as a Call of Duty game I can sort of understand why keeping the player from peeking behind the curtain like that is important, and as it’s an annual franchise that’s primarily focused on consoles, I can also understand why they didn’t want to go over every single segment of the game to make sure a higher FOV hadn’t completely fucked any of the cutscenes, setpieces, or visual effects up just for the PC. 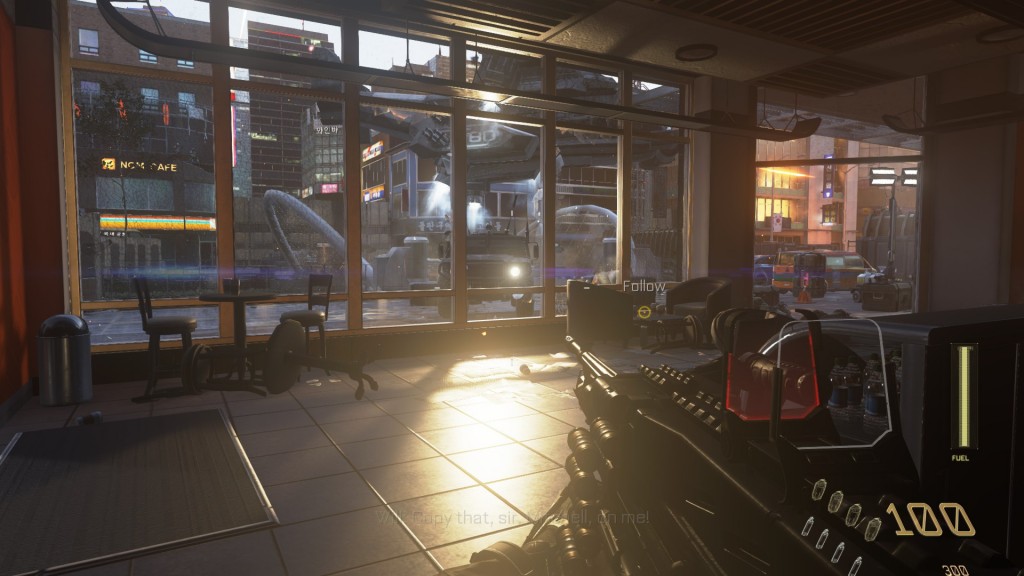 Really – am I the only one who thinks this actually looks quite nice?

That doesn’t excuse it, mind, but I can certainly understand why single-player is the one area that lacks the FOV slider. I’m mostly just glad we have it at all. Unfortunately, this also means that single-player might inflict a bit of motion sickness in people; I’ve yet to see any moments nearly as painful and nausea-inducing as Ghosts‘ opening segment, but then I haven’t really played much at all.

What I have played is the first mission, which is sort of hilarious if only because of the ludicrous amount of pathos delivered in its closing cutscene. It depicts a pair of Best Friend Marines going into battle in Seoul, where North Korea has invaded, and all I can remember is that one of them is called Will. You spend quite a lot of time running around shooting people, and there’s a brief turret segment, and then you have to blow up a big hovering artillery piece. Except its control panel slams shut onto your Best Friend’s arm and he blows up with it. 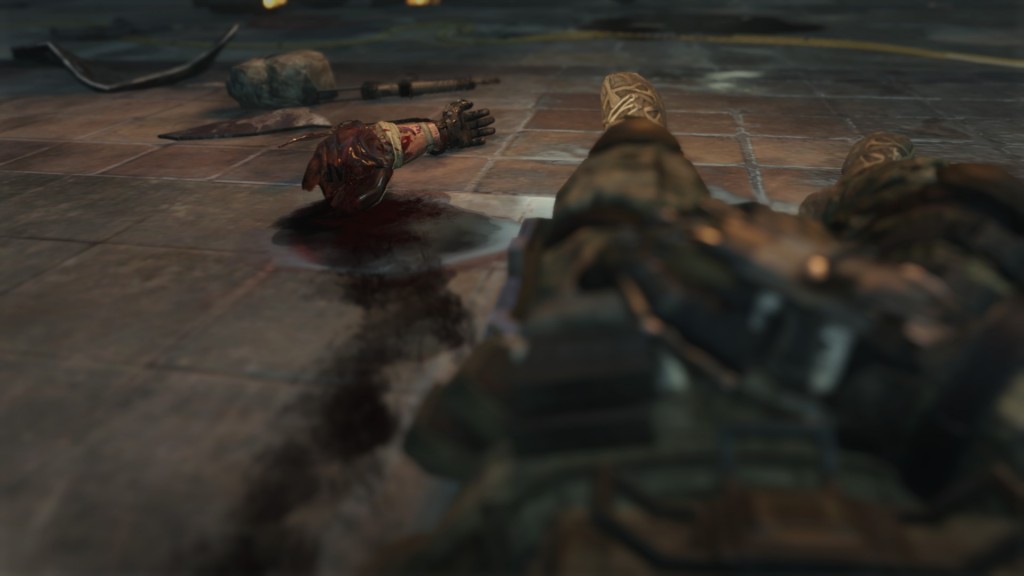 Protagonist Whose Name I Have Forgotten lies on the ground, staring forlornly at what he once affectionately referred to as his “wanking arm”.

Actually, a thought: I’d like to see the next Call of Duty game subtly change its protagonist’s name every level, just to see if anyone notices. Just change a few letters, or change it to a name that sounds similar. Because seriously, I haven’t been able to remember the name of any Call of Duty protagonist since “Soap”, and it helps that Soap isn’t the sort of name you forget easily.

It seems to pretty much be Call of Duty by the numbers, but unlike Ghosts, this actually feels like… well, like decent Call of Duty. The shooting is sharp, the movement swift, and it all goes together rather well. Obviously this is just the first mission so there’s plenty of time for it to go down the toilet, but hey, I wasn’t hopelessly disgusted by what I’ve played so far. 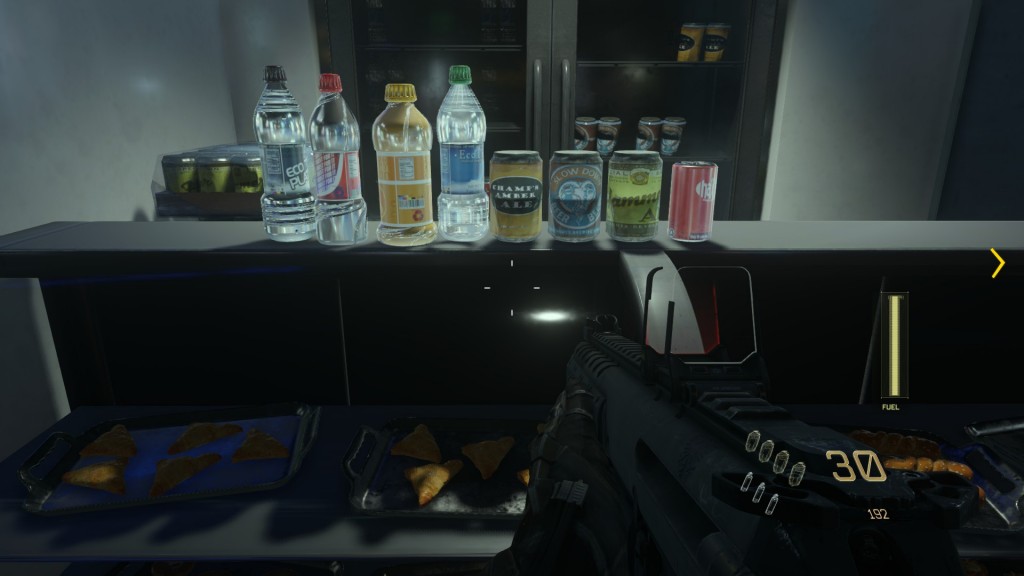 I’ll concede that this is far from the most exciting shot in the world, but there’ll be plenty of time for that in the review. Instead, let’s have a nice close-up look at some incidental detail, with the graphical settings on “fairly high, I guess”.

Seoul is also quite a nice-looking opening level, with its neon lights providing a good excuse to make you go “oh, hey, that looks rather nice.” It doesn’t look next-gen-spectacular, but it’s hardly visually offensive, and it seems to run at a decent clip on my i7-3820/16GB RAM/GeForce GTX 670. There’s some occasionally stuttering when it first loads up, but after the initial 5-10 seconds everything seems to run at a solid 60FPS.

I’ve had a play with some of the amazing new Exo Suit powers, which haven’t changed things up too much yet. There’s been a bit of dropping down from extremely high places by tapping my jumpjets to slow my descent, and a bit of double-jumping, but none of this has really changed things in a big way. Seoul is still as linear as a steel ruler, so here’s hoping future levels actually change things up a little bit. Not least because it took me about four minutes of actual playtime before I ran into my first invisible wall.

It’s probably worth mentioning that the loading time for the first level is utterly inexcusable, though. We’re talking “barely halfway loaded after the lengthy intro sequence had finished”, which is ludicrous. The second level seemed a bit better, thankfully, but… 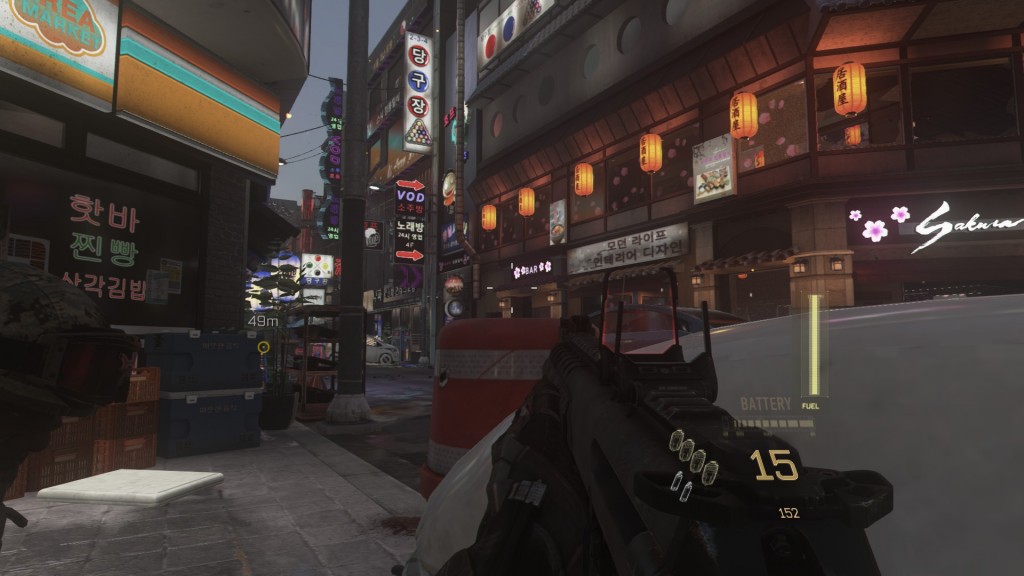 I quite like that that HUD is now just a holographic display on your gun, too. Minor touch, but a nice one, although because I’m not yet used to it I’m finding it hard to see my status at a glance.

The Exo Suit comes into play a lot more in the multiplayer, with the levels taking verticality into account. Instead of sprinting around corners and tight corridors and into big open killing fields, you can also leap onto the tops of buildings (or at least raised sections of ground). This gives you a better degree of vision… but also tends to silhouette you against the sky, and makes you a lot easier to see. And shoot.

This may actually make Advanced Warfare the first Call of Duty game in which leaping around like a sugar-high toddler actually has a valid purpose within the confines of the game’s fiction.

The best way to describe it is, as many others have said, a bit like Titanfall without the Titans. You’ve got dashes and a Vanquish-like crouch-slide to go along with your double-jumping, and the maps have all been designed with this verticality in mind, so there are plenty of extra routes and paths to find. The maps are obviously a lot smaller and tighter than Titanfall because there are no Titans, and it doesn’t have the same level of freedom (there are some raised bits that, as far as I can tell, you categorically cannot get onto) but it’s still a nice shift away from default CoD. Same pace, same basic multiplayer structure, but with some actual additions aside from “the levelling system is different” and “the guns are a bit different.” 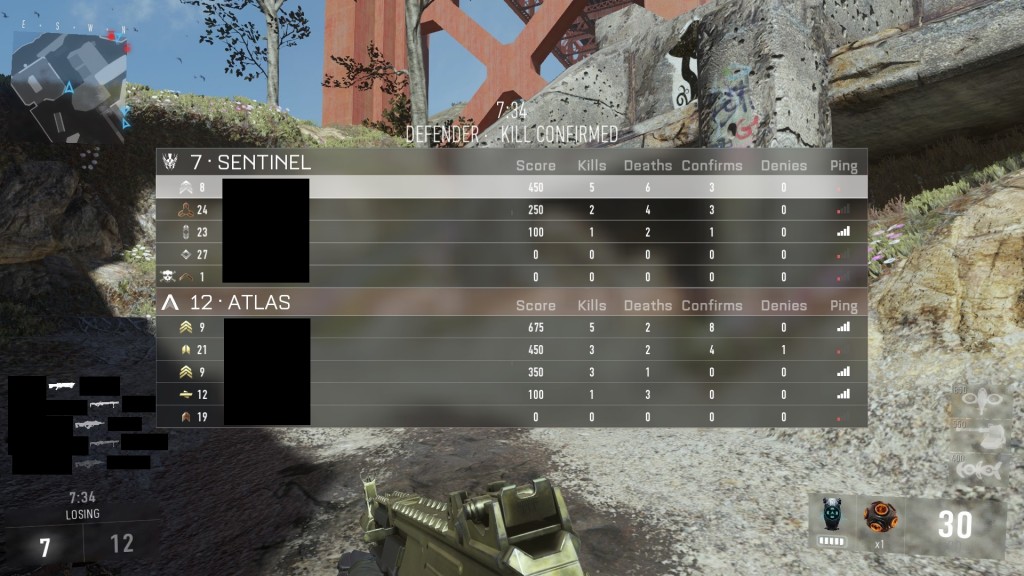 Some actual numbers for the ping would be nice, game, particularly because you’re practically vibrating between one bar and four bars.

The most important thing is probably the netcode, though, and I really don’t feel comfortable judging this just yet. The very first game I had was a Survival mode game, and, uh… well, it was laggy and horrible and basically unplayable. The second, third, and fourth games were a bit more variable; it was rare that I felt lag had cheated me out of a kill or got me killed, but there were still a few definite moments where my ping seemed to spike.

I’m finding it really hard to figure out how good or bad this is, though. The ping display is once again an utterly useless four-bar thing (think phone signal) and this is a completely rubbish indication of how my connection is holding up – particularly when it seems to oscillate wildly between the absolute bottom and the absolute top. Seriously, guys, we’re PC users. We’re not scared of numbers. You can give us an actual ping. 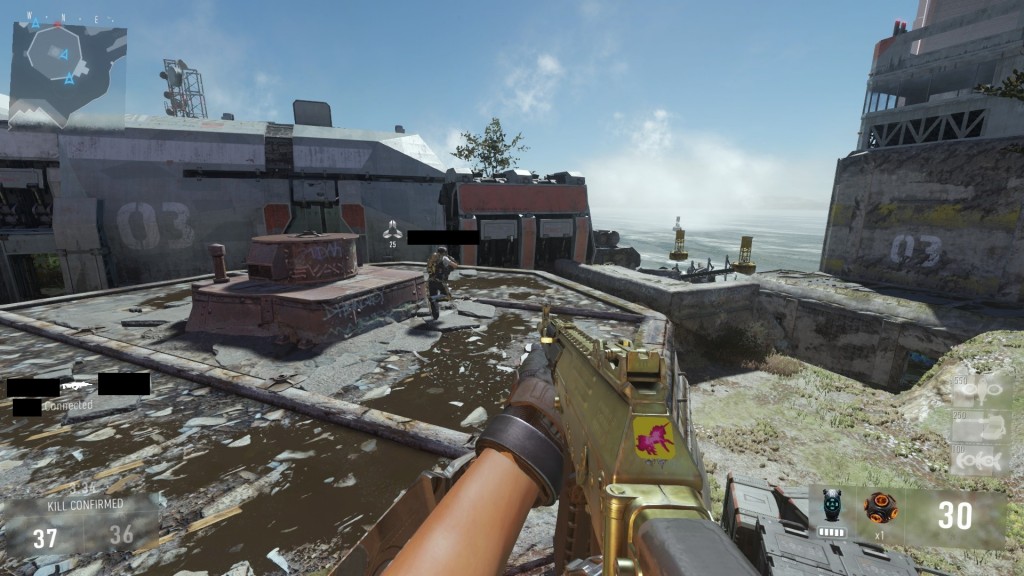 This shot was originally to show that, with the FOV maxed out, you do actually have a pretty good range of view. I then decided that it was much more important to show off my unicorn-themed emblem.

On the plus side, I am genuinely happy with the ability to raise my FOV to 90. At that point it actually feels like a PC game, rather than a console game half-arsedly ported across. I approve. I’m also happy that the netcode seems to be better than that of Ghosts, but again, that’s hardly praise.

My current opinion of Call of Duty: Advanced Warfare, then, is a resounding “hmm.” At this point I like it a lot more than Ghosts and I haven’t seen anything that gives me a particularly major cause for concern, which is a pretty good sign! On the other hand, I really haven’t played much at all. I need to play the rest of the single-player. I need to properly investigate the netcode, try different graphical settings to see how well it really copes, and so on and so forth. There’s a lot to do, so I’m not about to recommend Advanced Warfare to even the most die-hard Call of Duty fan just yet, but I’m not reeling in horror and that’s a hell of an improvement over the last game. 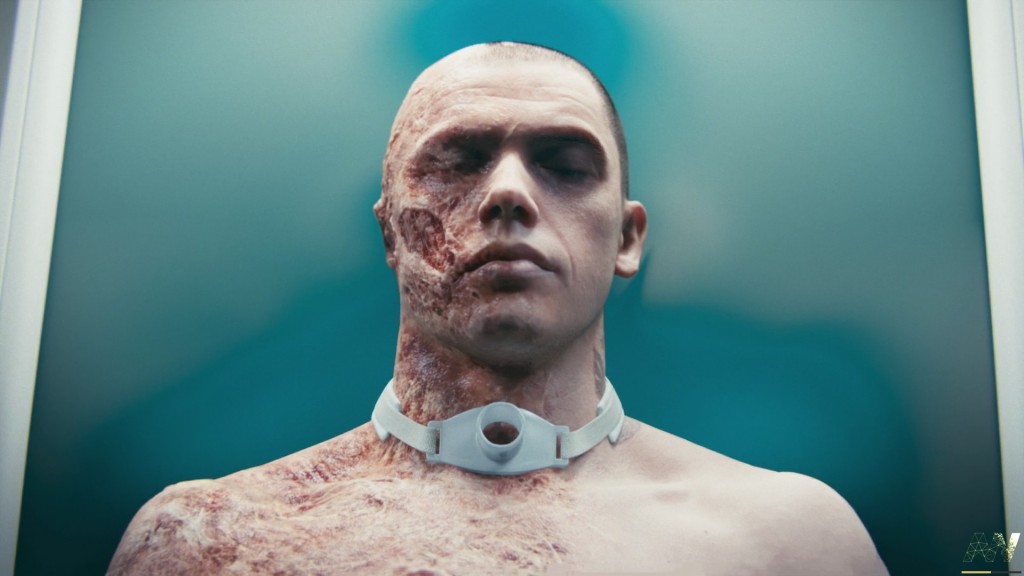 I’m hopeful that all that Kevin Spacey stuff was a Kojima-like bit of misdirection, and that Advanced Warfare is actually just another excuse to make a Robocop game.

EEDAR: Gamers Are Divided Along Platform (Not Gender) Lines