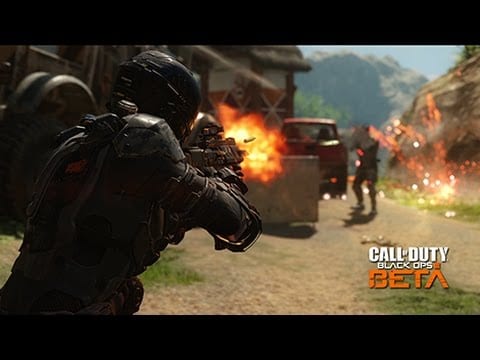 The Call of Duty: Black Ops 3 multiplayer beta is still a couple of weeks away on PC, but that doesn’t necessarily mean it’s too early to learn what it’ll include.

On PC, the multiplayer beta will run between 26 August and 30 August (inclusive of those dates, as far as I understand it). Beta access is gained through (what else?) pre-ordering the game.

In the beta, eager Black Ops 3 recruits will be able to unlock weapons, perks, equipment and score-streaks. However, as a small asterisk in the trailer notes, these things are for “beta duration only” and will not carry over into the full game once it’s released.

You can also look forward to weapon customisation and a paint shop. That latter thing is presumably for giving your guns a shiny coat of colour, rather than a mini-game where you run a store selling tins of Dulux.

Judging by the rest of the trailer, the Black Ops 3 multiplayer will have the (now) traditional selection of airstrikes, weird future drones, headshots, as well as plenty of leaping and sliding about.