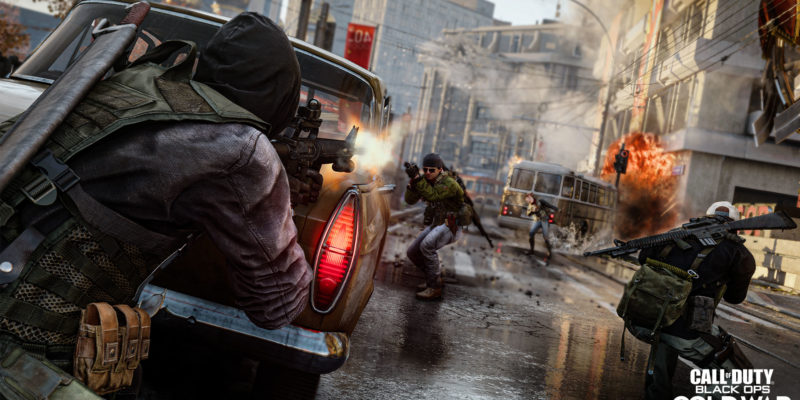 Flinch has been a controversial mechanic in Call of Duty titles, because it causes aim to be thrown off track while taking damage. Effectively, it causes cross-hairs to move upwards when being hit by an enemy player. However, it appears that Call of Duty: Black Ops Cold War flinch will differ from the past.

Recently, Treyarch revealed the multiplayer for its next title with an explosive trailer that showcased some gameplay. Ever since, developers have openly discussed further features that will be in the game, such as bullet penetration. The same Treyarch game designer, Tony Flame, outlined how the flinch mechanic will differ in Call of Duty: Black Ops Cold War.

In a tweet, Flame explained that the purpose of the flinch mechanic has changed. Rather than it impacting aim, flinch will be used to help players understand that they are taking damage. Also, there will be no more flinch headshots in Treyarch’s next title.

Damage Flinch has been redesigned in Black Ops Cold War. Flinch is now primarily a feedback mechanism to help you understand you’re taking damage, without affecting the aim position of your weapon. Your weapon will move with your screen to stay on target. No more flinch headshots

No more flinch as we know it

To demonstrate this in action, content creator Xclusive Ace uploaded a clip of a slow-motion gunfight. The clip was from the alpha build of the game, which some content creators got early access to. The video showed that even when hit by bullets, the cross-hairs did not move significantly.

Lots of people have expressed concern (rightfully so) about how high the Headshot multiplier is in Cold War due to flinch but it turns out there's little to no flinch when shot as far as I can tell. The deeper I look, the more I'm seeing a really solid gameplay foundation pic.twitter.com/IGQvKVdotm

Therefore the ability to win gunfights will be determined by aim, with no other factors hindering it. It is unknown if the reformed Call of Duty: Black Ops Cold War flinch mechanic will differ depending on the weapon. Players will not have to wait long to find out additional details about game mechanics though. You can preorder Call of Duty: Black Ops Cold War to gain access to the beta. The open beta which is set to begin on October 17. The full game will release on Battle.net on November 13.

Ooblets is getting a new spooky update for Halloween