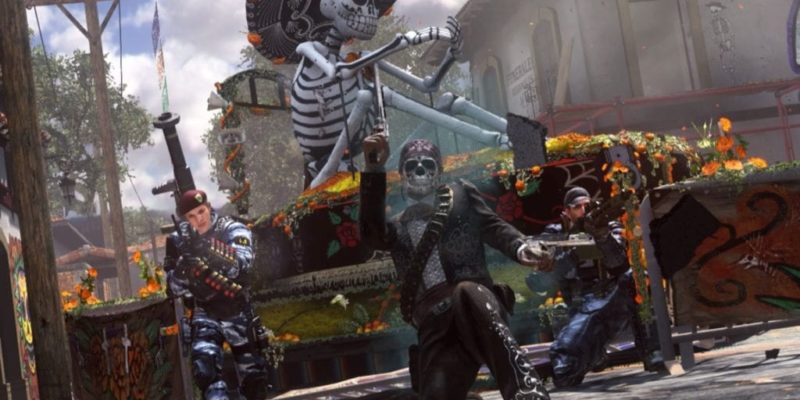 Even I have to admit, this is a pretty great looking map.

Call of Duty: Ghosts may have been a pretty lousy game on PC, but at least the DLC packs are staying nice and absurd. In the upcoming Invasion add-on, you’ll be encountering ghost pirates, deadly Mariachis and the Egyptian god of the dead, Anubis. Nothing weird about that.

The Ghosts DLC releases all have a rubbish one month exclusivity deal with the Xbox, so expect to see Invasion show up on PC in early July. As usual, if you have a Season Pass you’ll be getting this as part of that deal. If not, but you want to buy it anyway, it’ll (most likely) be a $15.00 USD standalone purchase.

Invasion will add four maps to the multiplayer roster. “Mutiny” is based around a Caribbean pirate hideout, with a pirate ship right smack in the center. Any player who unlock’s Mutiny’s field orders will be joined by a pair of friendly ghost pirates. Aw, bless.

If you prefer something in a Mexican style, “Departed” is set in a small town during the Day of the Dead festival. Completing the field orders here will unlock the “Death Mariachi killstreak” during which you turn into a stylish, gun-totin’ character from a Robert Rodriguez film.

“Pharaoh” is based around an abandoned archeological dig site that was examining an ancient Egyptian palace, complete with collapsing monuments. The field orders here will earn you the respect of Anubis, which is bound to be helpful.

Finally, “Favela” is set in a Brazilian shanty town and is a rejigged version of the Modern Warfare 2 map of the same name.

As always, the Invasion DLC will also bring the next installment of the co-op Extinction mode. “In [Episode 3] Awakening, the team descends into the perilous alien underworld to strike at the subterranean fortress of the Ancestors – the mysterious puppet-masters behind the Cryptid invasion,” it says here. New “hi tech equipment” is promised too.

Here’s a map preview trailer to help you visualise all of those things with the power of moving images.