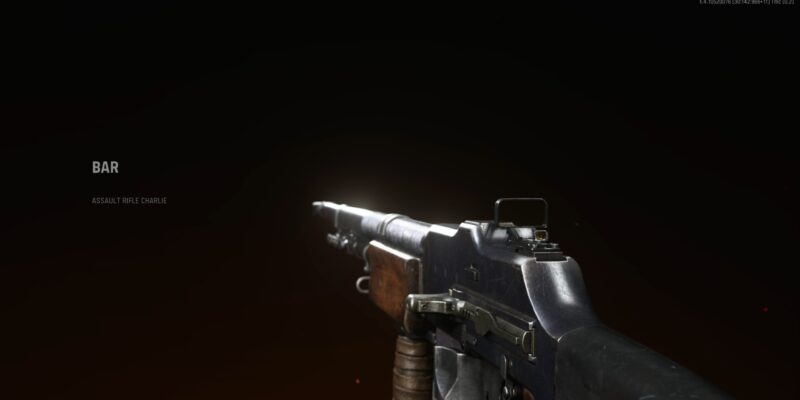 Call of Duty: Vanguard took us back to the World War Two era when it launched on November 5. The game has a new campaign for you to play through, a new multiplayer experience, and the Zombies map known as Der Anfang. There are also some new weapons, although the BAR has appeared in the Call of Duty franchise before and with the best attachments, you can build a powerful class for it in Vanguard.

The BAR is a fully automatic assault rifle, best suited to taking on long range engagements. Specifically, this class will focus on maximising the fire power and accuracy of the gun. Moreover, its relatively low ammunition count will be taken into account.

Firstly, the F8 Stabilizer is a strong way to begin your class as it significantly increases the accuracy of your weapon, while providing you with extra damage range. Next, the CGC 30” XL Barrel has many positives. Although it impacts on your mobility, recoil control, accuracy, and flinch resistance will get huge boosts. At the same time, it reduces scope sway and gun bob when you are aiming down sight. However, using the M3 Ready Grip can help you gain back some lost speed by providing you with greater aim down sight speed, sprint to fire speed, and aim walking movement speed.

To further improve your accuracy, the Pistol Grip Custom Stock will allow you to experience more horizontal recoil control and faster aim down sight speed. Then, the Stippled Grip will ensure your weapon is ready for any fight with recoil recovery, and initial accuracy and recoil gains.

Pack a punch with the BAR assault rifle

In terms of ammunition, the .50 BMG 30 Round Magazine is a strong option. Apart from adding more to your magazine capacity, it makes the BAR a better weapon all round. The attachment provides it with more bullet velocity, range, damage, and bullet penetration. Notably, it does have some drawbacks such as impacting your movement speed and recoil. These aren’t too much of a detriment though, as this has already been countered by the previous attachments that you have already equipped. In addition, the Lengthened Ammunition Type will take your bullet velocity to the next level with an added 30%. The Fully loaded Kit will maximise your starting ammo, allowing you to mow down as many enemies as possible.

When selecting a Proficiency, Focus is a viable option as it reduces your flinch when you are getting hit by an enemy. Finally, the Slate Reflector Optic is a useful sight which will allow you to take advantage of the of the BAR’s new found firepower and accuracy.

Once you have built your BAR class, it is more than able to compete with some of the other weapons in the Vanguard assault rifle category.