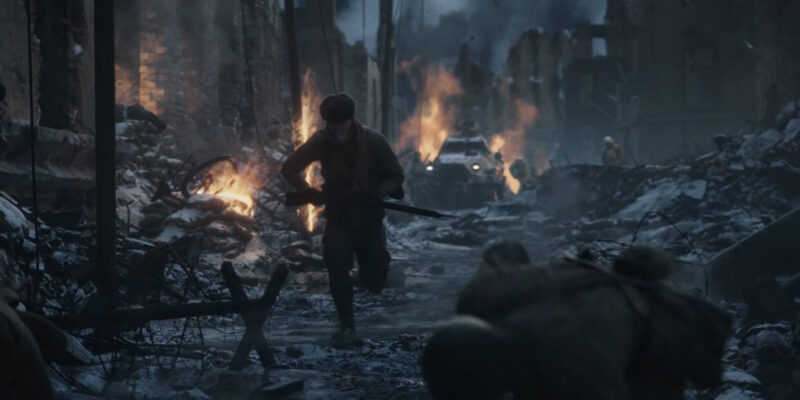 Activision released a new trailer for Call of Duty: Vanguard, showcasing its campaign. As well as providing some insight as to what the story will be about, this trailer also reveals the main cast. The cast consists of five characters who together make up The Vanguard, an elite military division.

It should come as no surprise that the story follows an allied front that is trying to defeat the Germans. More specifically, a Fourth Reich has begun to rise up and our heroes are taking the fight to them. It is currently unclear if Vanguard will directly reference the Nazi party. Previous reports suggested that Sledgehammer would not censor the game, but there are no swastikas present in this trailer. Instead, German soldiers don the Iron Cross from WWI.

Thanks to the campaign trailer we now know who the main characters in Vanguard are. We play as Arthur Kinsley, a British paratrooper who was part of the 9th Parachute Battalion. He is the leader of the Vanguard and is closely supported by his right-hand man, Richard. Arthur is based on Sidney Cornell.

Watching their backs from a distance is Polina Petrova. She is a Russian sniper who was part of the 138th Rifle Division. She swears vengeance against the Germans and is based on Lyudmila Pavlichenko. As for the skies, it’s Wade Jackson’s job to keep them clear. He is an American pilot who was part of Scouting Squadron Six. Jackson is based on Vernon Mike Micheel.

The last character revealed in the Vanguard campaign trailer is Lucas Riggs. He is an expert demolitionist from Australia’s 20th Battalion. Technically, Riggs is based on Charles Upham, a two times Victoria Cross-winning soldier from New Zealand. Most likely for marketing reasons Sledgehammer Games has decided to make him Australian.

Fans will be able to try out Call of Duty: Vanguard once it launches on November 5. If you’re interested in picking it up then consider checking out our first impressions of the multiplayer beta first.