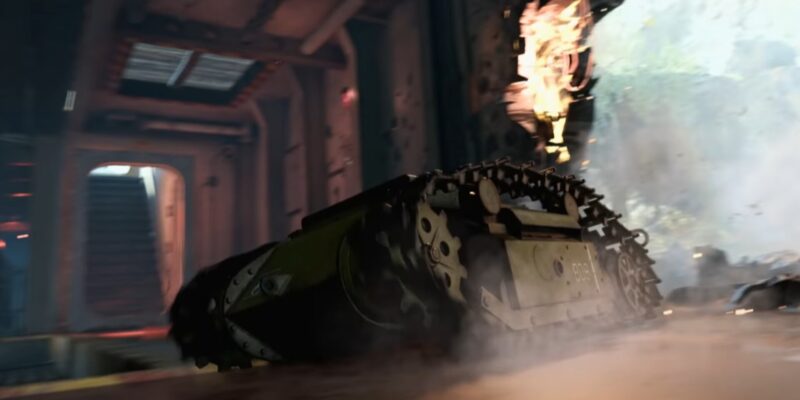 The multiplayer of Call of Duty: Vanguard was shown off in a gameplay reveal trailer earlier today. And for a moment, I thought I was watching a game of Battlefield. I suppose I could be forgiven, since I don’t believe anyone could have predicted watching someone remotely pilot a cute mini-tank… that later exploded.

The multiplayer gameplay reveal trailer for Call of Duty: Vanguard was shown earlier today in a 30-minute livestream. During the show, members of developer Sledgehammer Games ran down some of the features coming to Vanguard’s multiplayer component. Some of the details were already known. For example, the multiplayer will include 20 maps to play on. There are also several betas on the horizon, with the PC version cracking off on September 16 (for Early Access). We also saw more environmental destruction, with allies and enemies bursting through windows and boarded-up holes like the Kool-Aid Man. The destruction won’t be on par to Battlefield‘s Levolution, but there will be a lot of shit breaking in Vanguard.

There were also features that are either new, or haven’t been expanded on until today. For example, that aforementioned drone is something I didn’t expect to see. Drones certainly aren’t new to the franchise. Modern Warfare had players zipping around in RC vehicles for a while. But Vanguard is set in World War II, so pardon my confusion. The CoD team also revealed Combat Pacing, a mode that changes the speed of matches with three options: Tactical, Blitz, and Assault. Tactical is your bread-and-butter CoD, featuring 6v6 battles and a slower pace. Blitz is your more modern CoD, with 28 to 48 players in a contest to see how many respawns you can collect. Assault is a blend of the two, with 20 to 28 players in a match.

Team up, tear down

The Call of Duty team did reveal more in a blog post following the multiplayer gameplay trailer. There will be a new clan system for the game, which combines elements of Modern Warfare‘s Regiments system. It’ll include progression awards and emblems, some of which will be tied to the Battle Pass. Operator Perks and Weapon Perks are getting smashed together and renamed Proficiencies. There will also be Field Upgrades, and Activision points out that Dead Silence will be in Vanguard, and you can extend its active time with killing foes.

So far, the multiplayer of Call of Duty: Vanguard looks very much like Call of Duty. Make with that what you will. I’ve played a lot of Call of Duty in the past, but I’ve since retired. Not much in the Vanguard multiplayer reveal trailer is tantalizing enough to make me want to come back, but I’m sure fans have a lot to love.

Activision Blizzard is currently dealing with a lawsuit alleging “frat boy” culture, including harassment and discrimination. There has been mass walk-out by employees, and several in leadership positions at the company have been removed.

Destiny 2: All Atlas Skew locations in Rheasilva and Harbinger (Week 3)