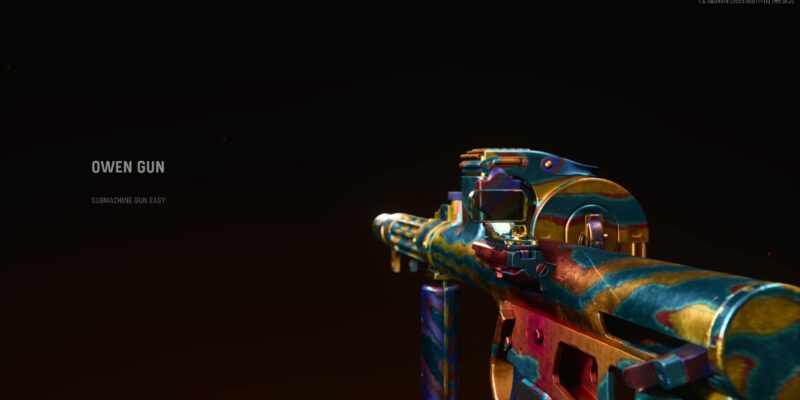 The launch of Call of Duty: Vanguard has introduced a new campaign, new multiplayer maps and modes, and a new zombies experience. One weapon you may want to take to the battlefields of Vanguard is the Owen Gun, and the best class will make it a strong contender.

The Owen Gun is a high caliber, fully automatic submachine gun that is best at close and medium ranges. As the Owen Gun is a submachine gun, it can shred through enemies at close-quarters. The multiplayer maps that this gun is best suited for include Hotel Royal, Eagle’s Nest, and Dome. While you are playing these maps, you may find yourself in many close range engagements. At the same time, there are plenty of instances where you will take on medium range fights. This class will predominantly focus on the accuracy of the gun, allowing it to compete at those further ranges to make sure you come out on top.

To begin creating your class, use the Strife Compensator Muzzle in order to gain more recoil control without any detriments to your weapon. Pairing this with the Carver Foregrip Underbarrel will further improve your recoil control, with increased hip fire accuracy. Equipping the Gawain 188mm Shrouded Barrel will provide many benefits to the Owen submachine gun. You will experience less damage fall off, a longer range, added bullet velocity, and increased limb damage. Ultimately, this will allow you to take advantage of the added range that this gun has and compete with other weapon categories that would typically be associated as being more viable at medium ranges, such as assault rifles.

Making your bullets as powerful as possible

In terms of a Magazine, the 7.62 Gorenko 72 Round Drums is a viable option. Apart from gaining more magazine ammunition capacity, your recoil control, accuracy, and fire rate will be significantly improved. Along with the Lengthened Ammunition Type, which will see you gain 30% more bullet velocity, the Owen Gun will be sure to pack a punch. As a result of the magazine, the class does take a hit to some recoil and accuracy. However, the Stippled Grip will bring it back on top form by increasing recoil recovery and initial accuracy and recoil.

Allowing you to run and gun, the Removed Stock attachment will boost your movement speed, aim down sight speed, sprint to fire speed, and aim walking movement speed. Additionally, the Quick Kit will provide you with extra mobility with improved sprint speed. Then, the Brace Proficiency is useful in boosting your initial accuracy and recoil control even further so you can lock on to your opponent as soon as you begin firing.

Although it may feel unnatural to use an Optic on a submachine gun, the Slate Reflector is a strong choice. This attachment will allow you to take advantage of the added accuracy, helping you to take down enemies at those longer ranges. Now, you will be able to climb to the top of the leaderboard in your next Vanguard match with your new Owen Gun class.