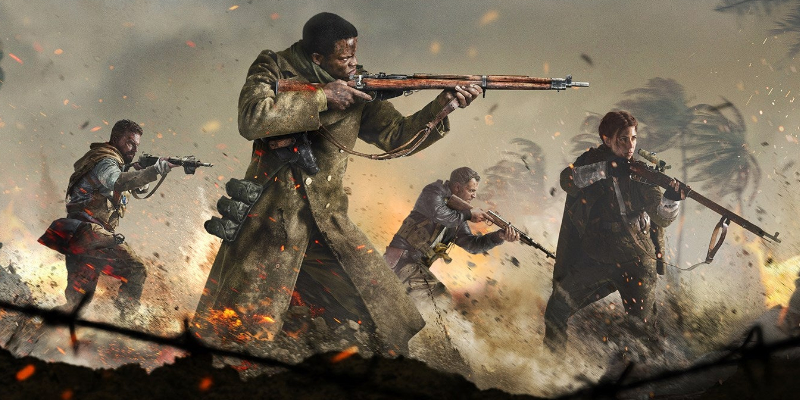 Last year’s Call of Duty was a divisive one. Treyarch moved away from just about everything Modern Warfare had built up, opting to create a classic-styled CoD game instead. Some liked the shift, but others certainly didn’t. This time around it is Sledgehammer Games’ turn with Call of Duty: Vanguard, an entry that pivots back to Modern Warfare‘s newer engine.

Sledgehammer Games has previously been responsible for Advanced Warfare and WWII. It has also assisted with the creation of Modern Warfare 3 and Black Ops Cold War. It’s a reasonable, but mixed, list of installments that don’t have too much in common beyond their shared brand name. This diverse list of installments makes it difficult to predict what to expect from a Sledgehammer Call of Duty game. It creates some unease, but I’m glad to say that there are more positives than negatives to Vanguard, at least if you stick to multiplayer.

For most players, it’s probably multiplayer that interests you, but Call of Duty campaigns do have their own appeal. They can be finished in one or two sits and usually do a reasonable job of replicating a conventional Hollywood action movie. They are limited in nature, but are okay for what they are.

I’d like to tell you that Vanguard moves away from this trend and offers more, but that would be a lie. This story has you play as a variety of soldiers inspired by several real-life World War II heroes. The main character is Arthur Kingsley, a British paratrooper based on Sidney Cornell. Some of the other leads include Polina Petrova, based on Lyudmila Pavlichenko, and Lucas Riggs, based on the definitely Australian, and not at all a Kiwi Charles Upham. 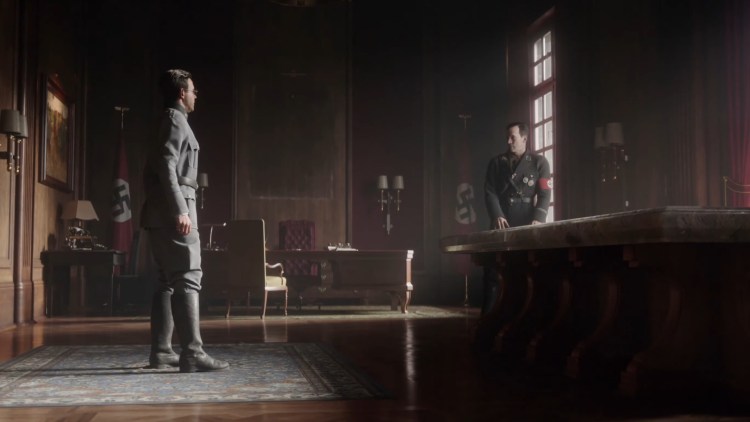 The bulk of the story takes place in a Nazi headquarters where each member of the Vanguard is interrogated one by one. They provide insight into their backstory, explaining how they got to this point. The stories themselves are well presented and showcase the brutality of World War II, but there’s a clear problem that holds the story back.

It took me just under six hours to finish the campaign, making it too short for my liking. That length isn’t long enough to create a meaningful story with such a large and diverse main cast. The Vanguard hardly ever work together, only doing so near the end of the game. We find out what motivates our heroes, but don’t get much of a chance to see them work together. Compared to Task Force 141, the Vanguard just doesn’t offer enough for me to get invested.

Leading up to release we found out that the Zombies mode would be handled by Treyarch rather than Sledgehammer. The exact reasons for this are unknown but it sounded like a positive given that Zombies is Treyarch’s baby. Having a separate studio ensures that more resources can be put into it without negatively affecting the other game modes.

At least that is what you would assume. Yet Call of Duty: Vanguard has what may be the most lifeless Zombies mode since the original World at War map. Treyarch has somehow managed to remove almost every aspect of Zombies that its fanbase was fond of. 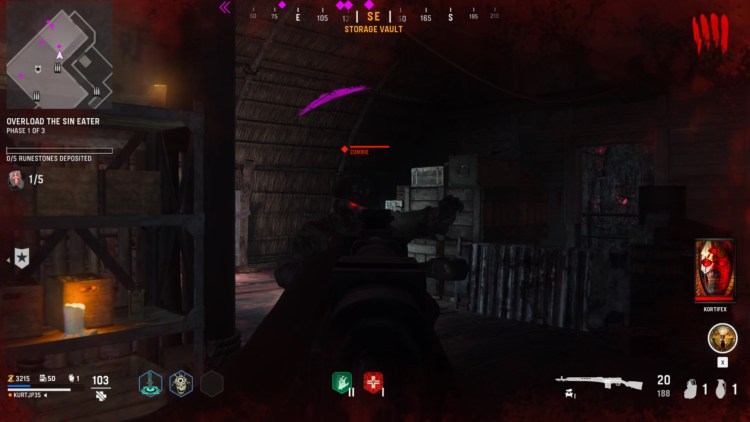 To list some features not present in Vanguard Zombies: there are no waves, no wonder weapons, no Pack-a-Punch weapon variants or camouflage, and no Easter eggs. Instead of waves, players have to complete selected objectives by choosing one of the portals in the main hub. After an objective is complete, they are teleported back to this hub.

In the hub, you can use scrap to build items, acquire additional perks, and Pack-a-Punch your weapon. Yes, Pack-a-Punch is in Vanguard Zombies, but the way it has been implemented is incredibly boring. Rather than converting your MP40 into its badass variant, The Afterburner, the Pack-a-Punch now just ups your damage numbers a little. Attachments are determined by loadouts set up before joining a game. In other words, it’s possible to start at the very beginning with a stacked-out primary with up to 10 attachments. 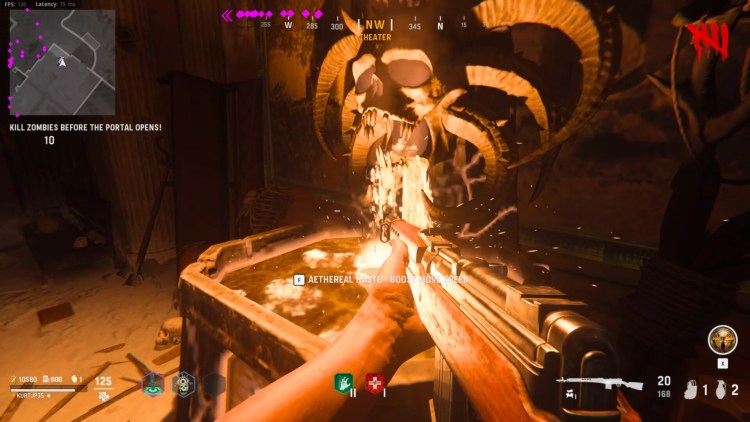 These balancing issues persist with the perk system, too. Remember the iconic Juggernog, Speed Cola, and Stamin-Up? They are all gone and have been replaced by names so uninteresting that I genuinely couldn’t even remember them for this review. Furthermore, these perks can be upgraded to hilariously overpowered levels. The Stamin-Up replacement is especially ridiculous when fully upgraded. It boosts your sprint speed to that of several times any zombie you’ll have to face.

Having a stacked starting weapon coupled with the completely overpowered perks makes this the easiest Zombies game mode to date. The first Zombies map in Vanguard is not good. It’s so dull that the only time I’d recommend playing it is to level up low-level guns. Perhaps future maps released in later seasons will amend this, but for the time being, Zombies alone is not worth buying Call of Duty: Vanguard.

A lifeless Zombies mode and another so-so campaign aren’t ideal, but let’s be frank: it’s multiplayer that really matters. This is the game mode that the mass majority of Call of Duty fans are here to play and grind out over the coming year. For this reason, I’m glad to say that this is one of the franchise’s better renditions of multiplayer.

At least that’s true if you were fond of Modern Warfare. Call of Duty: Vanguard has a very much Modern Warfare-styled multiplayer from its feel, to how it looks and sounds. The newer and superior game engine utilized in Vanguard makes the gameplay feel slick and responsive, which wasn’t always true of Black Ops Cold War.

It’s sad to say, but seeing a Call of Duty multiplayer launch with a good amount of content is rare these days. Older titles like Modern Warfare 2 launched with 16 multiplayer maps, but since Black Ops 3, this number has been declining. It reached its lowest point with Black Ops Cold War, which had a pitiful eight 6v6 maps on release.

In contrast, Call of Duty: Vanguard has launched with an impressive 20 maps, with 16 being core 6v6 maps. The other four feature in Champion Hill, a fun new game mode that replaces Modern Warfare‘s Gunfight. Furthermore, there are an impressive 38 weapons to use, with most of these having in excess of 70 attachments to choose from. This is an impressive level of content that ensures players won’t get bored too quickly. 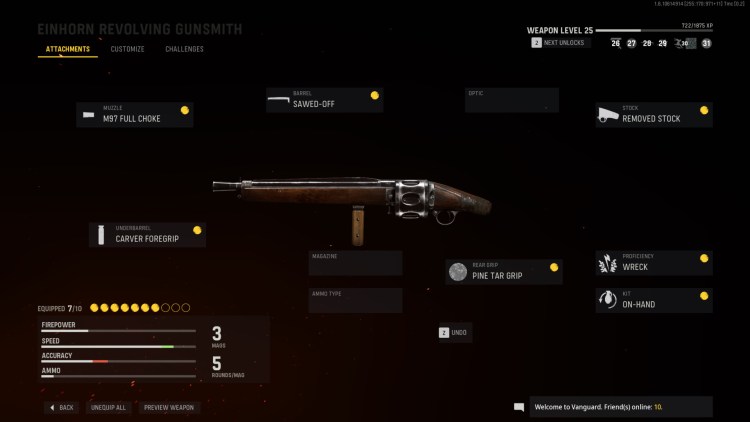 It isn’t as though the weapons are all the same and the maps suck, either. The guns feel unique and all have their own crisp audio and optimal playstyles. Plus, thanks to the Gunsmith returning, you can fine-tune each gun to be as effective or silly as you desire. As always, this can create some truly cursed gun builds that not even a mother could love.

As for the map list, Vanguard‘s is in contention for the best I’ve seen in any Call of Duty game. There are very few maps that I find myself skipping because they are miserable to play. Or, as I like to say, this game doesn’t suffer from a bad case of Piccadilly Syndrome. The likes of Castle, Das Haus, Dome, and Decoy are particular highlights.

You’ve may have heard this phrase before, as it is often thrown around in the CoD community in reference to Modern Warfare 2. The classic Infinity Ward-led FPS is remembered fondly by a lot of Call of Duty fans for just how broken everything was.

The snipers were lethal up close, the shotguns were lethal from afar, and just about everything between was equally overpowered. It doesn’t create a competitive environment. But there’s an argument to be made that, if it’s a silly arcade shooter you’re looking for, this approach has its merits. 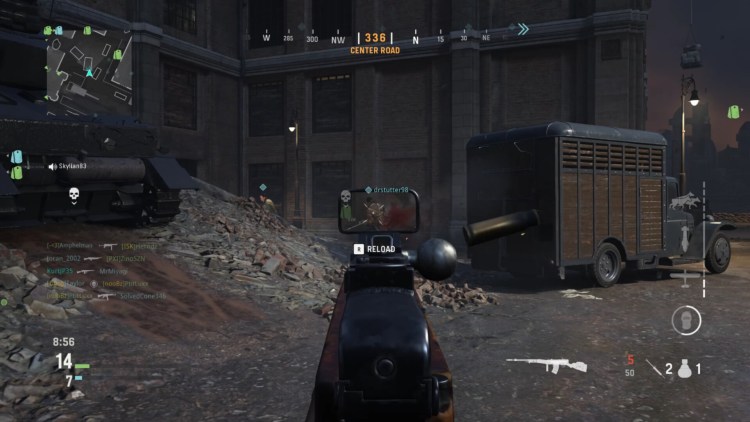 Call of Duty: Vanguard is the closest CoD to Modern Warfare 2 in terms of its balance philosophy. This is impressive considering that Modern Warfare 3 was pretty much a Modern Warfare 2 clone. The ability to have up to 10 attachments on each gun is crazy. Vanguard lets you create some of the most powerful weapons ever seen in Call of Duty.

As long as you don’t take deaths too seriously, this is a positive. Gunfights are fast, hectic, and hilarious, which is exactly what Call of Duty should be about. This doesn’t justify the bugs that are causing certain attachments to not work as intended, but a few patches should address the biggest offenders. Long term, I don’t see gameplay balance being a big issue unless you’re looking for a well-balanced competitive first-person shooter. Although if that’s the case, why on Earth would you ever buy a Call of Duty game?

Great for some, pointless for others

Call of Duty: Vanguard is a good game, but a game that clearly would have benefitted from more development time. It is buggy, and lacks that certain polish that I expect from a big-budget AAA game. The short campaign and lackluster Zombies mode are forgettable, and don’t justify the game’s $60 USD price tag at all.

Despite all that, I can say with confidence that I have thoroughly enjoyed my time with Vanguard. The multiplayer is incredibly fun, shifting the focus away from meaningless stats and towards just having a good time. Sure, the bugs need addressing, and certain weapons need adjusting, but if you look past that, this is a well above average Call of Duty. It’s just a shame that fans who aren’t interested in the multiplayer side of gameplay have little to care about.

As a huge multiplayer fan Call of Duty: Vanguard ticks all of the right boxes for me. It's chaotic and fast paced and besides some bugs that will surely be patched out, there's little to complain about. Unfortunately, the accompanying Zombies and Campaign modes are lacklustre and it is simply not worth buying the game for them alone.