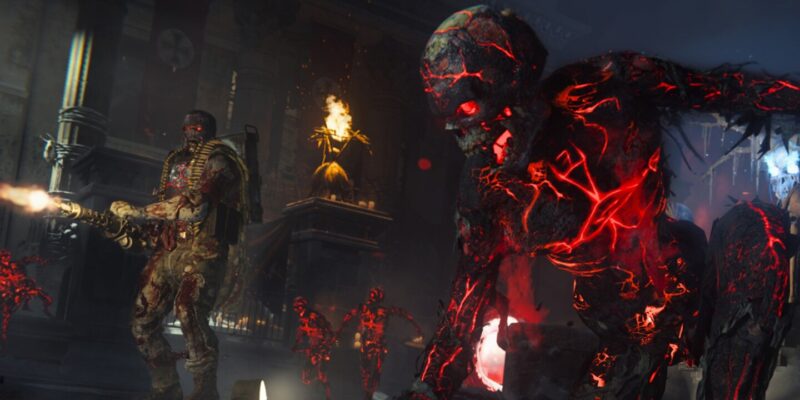 The launch of Call of Duty: Vanguard is just days away. Alongside multiplayer, we will get to try out a new Zombies experience. The next chapter of the Dark Aether story will be continued by Black Ops developer Treyarch. Now, fans have been given more details surrounding what we can expect from Vanguard Zombies at launch.

Firstly, Call of Duty: Vanguard Zombies will feature artifacts which you can use against the enemy. The Dragon of Saraxis spawns an Aethereal explosive which will deal a huge amount of damage to enemies who set it off. Next, the Mask of Bellekar lets you become invisible to enemies for five seconds. If you activate the Sword of Inviktor, you will see a ring of Aethereal flame, boosting damage for anyone inside for 15 seconds. The Horn of Norticus introduces a vortex which damages enemies with a blast, also slowing down those who enter it. These Dark Aether entities that provide the artifacts will be unique in-game characters.

Upgrading your arsenal at the Altar of Covenants

Described by Treyarch as the biggest innovation in Zombies to date, the Altar of Covenants will make its debut in Vanguard Zombies. They offer new abilities in exchange for the Sacrificial Heart loot you will get for completing objectives. At launch there will be 11 covenants with 32 upgrades. The covenants include Death Blow which returns bullets to the clip when you get critical kills, Unholy Ground allows you to deal more damage while stationary, and more. Once you experiment with different artifacts, covenants, perks, and weapon combinations, you should be able to find your perfect loadout.

Der Anfang, the first Vanguard Zombies map, will have five perk fountains. To begin, Fiendish Fortitude increases your health, and Diabolical Damage increases critical damage. Also, if you use Venomous Vigor you will experience faster health regeneration speed, while Demonic Frenzy boosts reload speed, and Aethereal Haste improves movement speed. The base tier of each perk will be free once you unlock it and you will then be able to upgrade the tiers using essence, a Zombies mode currency.

Looking ahead to Vanguard Zombies Season One

On December 2, even more content will launch, with objectives, Zombies seasonal challenges, new covenants and more coming. However, if you are looking forward to hopping into the main quest on Der Anfang, then you will have to wait a little longer. Treyarch outlines that this will not launch until after Season One. Despite this, Vanguard Zombies should still have plenty to go at when it launches as part of the game on November 5.

Activision has revealed the PC specifications for Call of Duty: Vanguard