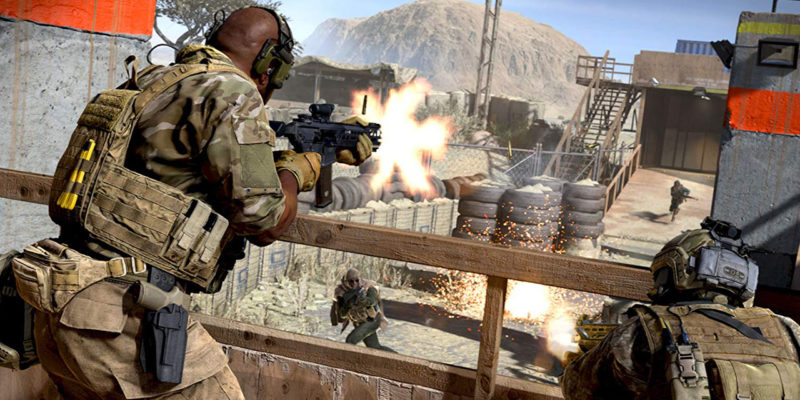 It’s no secret that Infinity Ward has been working on a battle royale of sorts for some time. Up until now, we hadn’t heard many details on how it would function, let alone that it even officially existed. However, a new leak shows not only that it’s on the way but also that Call of Duty Warzone will be a standalone free-to-play title. That’s right – players interested in giving it a go will not have to own a copy of Modern Warfare.

The leak originally comes from YouTuber Chaos, whose video on it accidentally went live early. He was flown out by Activision to try out the new game mode and provided an 11-minute breakdown of it. While Chaos has since taken his own video down, others have since re-uploaded it.

The leak showcases a wide variety of Warzone‘s gameplay. Perhaps the most striking change is the complete overhaul to Modern Warfare‘s time-to-kill. Among Call of Duty multiplayer modes, Modern Warfare has one of the fastest times-to-kill in the series. However, Warzone‘s looks to be far longer. Based on the eye test alone, players seem to have around twice as much health. That’s by no means confirmed, of course.

While further modes could come down the line, Call of Duty Warzone will launch with support for up to 150 players in a game. Furthermore, the overall pacing is surprisingly fast – which, once again, doesn’t tend to be the case with battle royales. It’s arguably not even the case with Modern Warfare.

Additionally, killstreaks will feature but are not gained by getting kills as normal. Instead, there will be buy stations that will sell kill streaks for in-game currency. There’s also a genius implementation of Modern Warfare‘s Gunfight game mode. When you die, you will be sent to the Gulag to one-on-one someone else for your life. The victor will drop back into the map and continue on as normal.

According to the leaked review, the map will serve as one of the largest ever seen in a battle royale. This aligns with a previous leak that suggested Call of Duty Warzone‘s map would effectively be a joining together of existing Ground War maps. Supposedly, the map hardly ever uses repeated structures. In other words, everywhere on it should play uniquely.

Anyone who has played Call of Duty for a long time will have plenty to watch out for. Call of Duty Warzone‘s map features tons of fun throwbacks to previous CoD titles. For instance, many Infinity Ward classic maps such as Terminal, Broadcast, and Overgrown make their full return.

There are even some cool little references to iconic CoD missions too. For example, in Terminal, one of the TVs shows a playthrough of Call of Duty 4‘s Mile High Club mission. However, this doesn’t necessarily mean Infinity Ward has only focused on providing nostalgia. Warzone will feature plenty of new maps and areas never seen before in Call of Duty.

It’s a lot to take in, but Call of Duty Warzone looks promising. After Black Ops 4‘s decent first attempt at battle royale, Activision is clearly upping the anty this time around. For the time being, we have no officially announced information, but Infinity Ward will likely act fast now that the leak has gone viral.

A new Worms game is coming at some point in 2020