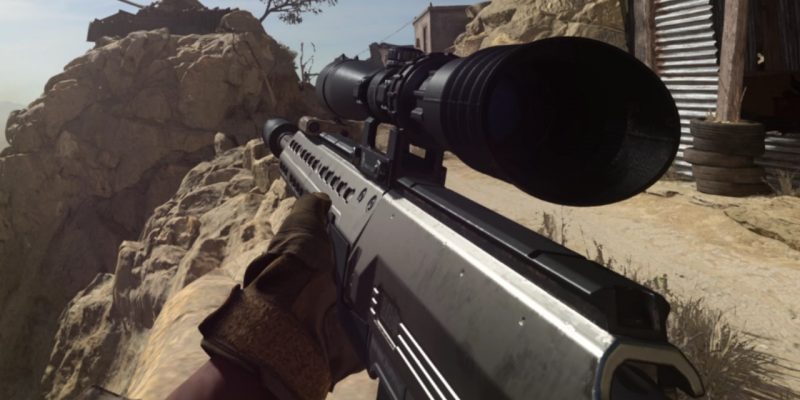 Recent seasons have caused the traditional, heavier sniper rifles to be widely replaced by the faster handling DMR counterparts. Truth be told, a more skilled player will generally benefit more from using either the Kar98k or SP-R 700. But that doesn’t mean that the HDR, which once dominated the Call of Duty: Warzone meta, doesn’t serve a role. However, you will need to build the HDR properly if you want to compete in Warzone.

Not everyone is a naturally gifted sniper rifle player. And when it comes to ease of use and accessibility, the HDR outclasses its competitors. This is thanks to its best-in-class bullet velocity and high default scope magnification. Even though the HDR is a poor choice at close and medium range, it’s still extremely strong from afar.

The HDR is a high-caliber sniper rifle best suited for long-range engagements. Its slow handling and unforgiving fire rate cripple its ability to perform within 75 meters. However, beyond that range, it is able to compete and often outgun just about every weapon in Warzone.

Given that the Call of Duty: Warzone HDR is a long-range one-trick, our primary focus is to improve its bullet velocity. The best attachment for this is the 26.9″ HDR Pro barrel which gives the HDR the best bullet velocity of any gun in Warzone. This is fantastic for landing shots at extreme ranges, as you don’t need to accommodate for bullet travel time like the other snipers. 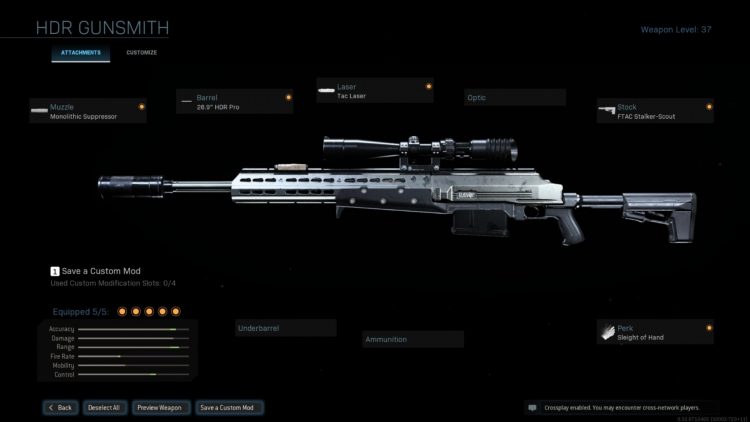 To improve its bullet velocity further, add the Monolithic Suppressor. In addition to helping bullet velocity, the Monolithic Suppressor will help to keep you off the radar when firing. As a bonus, shots are made substantially more quiet when using it. This is great for the HDR, as it’s otherwise an especially loud weapon. In higher skill lobbies, many players are using optimal audio settings and will be able to track you down with audio alone.

As no other attachments improve bullet velocity, the next focus is handling. In comparison to Call of Duty: Warzone‘s competing DMRs, the HDR is a relatively slow handling weapon. It is outperformed on fire rate, reload speed, and aim down sights time. To help mitigate this, run the Tac Laser. It provides the largest reduction to aim down sights time of any attachment. 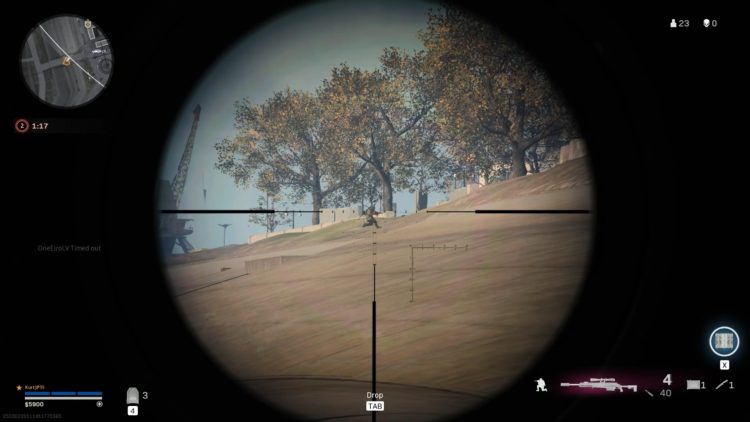 Since the HDR doesn’t have access to any Rear Grip attachments, you’ll instead want to use the best available stock. The FTAC Stalker-Scout helps reduce aim down sights time further and stacks well with the Tac Laser. Unfortunately, these are the only two attachments that speed up ADS time on the HDR. Even after these are attached, the meta Kar98k aims in far faster, so be wary when engaging in sniper duels.

What you use for the final attachment slot is up to personal preference. I like running the Sleight of Hand weapon perk, as it reduces our reload time significantly. But there are other viable build options for the Call of Duty: Warzone HDR. For example, the Variable Zoom scope can be toggled to provide up to 9.8x magnification. This works well given the HDR’s strength at long range. Alternatively, the Focus perk greatly reduces flinch, which will help you stay on target when getting shot at.

A Call of Duty: Warzone bug is making a window bulletproof