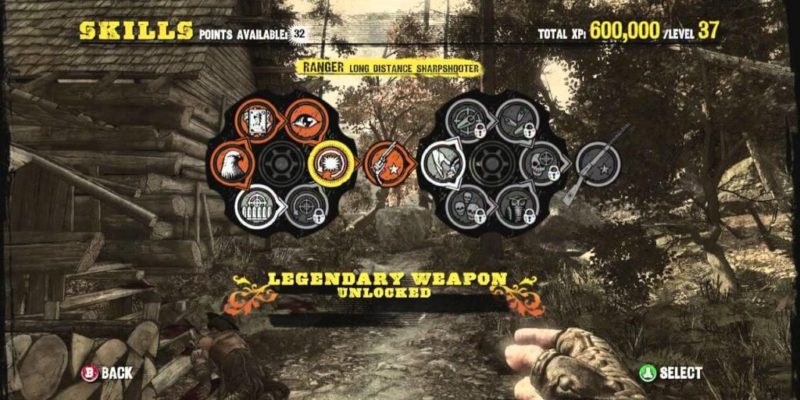 Outside of cut-scenes, nobody ever rides a horse in Call of Juarez: Gunslinger. For a game that otherwise seems so intent on hitting every key ‘Western’ theme (bank heist, train robbery, Native Americans, gold mines, six-shooters,) this is a pretty odd omission. The horses are there, usually standing around in stables or in need of fetching for an objective, but unsaddled and unridden.

Early in the game, protagonist and narrator Silas Greaves explains that he’s never much liked horses. Since most of the world is (literally) shaped by his storytelling whims, that’s perhaps why they play such a minor role. Greaves doesn’t like horses, so they barely appear. Even during a level about a gang fleeing a bank job, the perpetrators hilariously choose to depart on foot.

Hate to be a nag, but being unemployed sucks.

Ok, that’s a lot of introductory words about horses. Their downplayed role is probably as much to do with engine or animation limitations, but it’s also a reflection of Gunslinger’s overall design philosophy: like it or not, your actions are restricted by the story’s teller.

On a meta level that’s Greaves. In the main, it’s developers Techland.

Gunslinger is the fourth Call of Juarez title and a return to the more traditional Old West setting after The Cartel’s ill-fated flirtation with the modern day. It’s an arcade title through-and-through, with an emphasis on score-building, ‘shooting gallery’ style enemies and a price (£12.00 GBP / $15.00 USD) to match. The majority of the game’s fourteen story missions even have a corresponding Arcade Mode map, in which the objective is purely to sustain a chain of kills and rack up a high score.

It’s a simple yet heavily stylised game, which has both its rewards and its drawbacks.

This guy is so tough he’s named after a Bob Dylan album.

In story mode, each mission is presented as an additional portion of bounty hunter Silas Greaves’ bar-room tale to a group of attentive listeners. By degrees, he’ll tell the room how he was embroiled in the lives of Western icons like Billy the Kid, Jesse James and John Wesley Hardin, and these events will form the basis of the level. When the audience chips in, or when Greaves recalls a new detail, the mission changes shape accordingly.

For example, in the opening level, one of Greaves’ eager young fans exclaims that he must surely have dueled lawman Pat Garrett. That ushers in an introduction to Gunslinger’s quick-draw dueling mini-game, which provides the conclusion to several of the missions (and appears as yet another stand-alone mode of play alongside Arcade, in which the player has five attempts to face down fifteen infamous gunmen in a row.) In Duel Challenge mode these are nervy affairs, because repeated failure means having to bank your score and start back at square one. They’re a lot less tense during story mode because death just means a quick restart at the opening of the duel.

The mini-game is clearly designed for a controller, because (aside from the post-draw aiming) it feels rather awkward on mouse and keys. Mouse (or right stick) controls a ‘focus’ reticule that you need to keep hovered over your target, while the A and D keys (or left stick) move your hand around the sweet spot on your holster for additional draw speed. The focus control in particular is a bit more sluggish with the mouse than it is with a controller, and the whole process feels more natural on the twin sticks. This is unfortunate, because the superior aiming control of the mouse and keyboard is what you’ll be wanting to use the rest of the time.

Garrett? Shouldn’t you be using a bow?

But anyway, back to how the narration alters the level structure. Once Garrett has been given a dose of your trusty six-shooter, Greaves butts in to say that the day didn’t go down like that at all. Progress is rewound, and the true events (at least, according to Greaves) play out. It’s a clever way for the game to play around with timelines and dynamically alter bits of the level before the player’s eyes, but too often seems to fall back on rather mundane things like “and then I saw a ladder that would help me get to the next bit of the level.”

Unlike Bastion where player action (to an extent) guided the narration, Gunslinger’s narration is always pushing the player’s activities. When Greaves says “and then I ran away,” that’s exactly what you have to do. It’s a far more restrictive approach, and begins to wear a little thin at the point when you realise that the ultimate result of all these narrative tricks will only ever be more cowboy-hatted fellows popping up from behind rocks, crates and chairs for you to blast away. The game’s ‘twist’ is also telegraphed so far in advance that you kind of wish Greaves would just get on with it.

Not that shooting pesky bandits is all bad. There’s a decent selection of Old West weaponry to employ, two of which can be carried at any given time. Shotguns, rifles and six-shooters are all here, with the chance to dual-wield the latter if the player unlocks an early skill. Taking down your foes in skillful ways (distant headshots, say) or with chained combos will earn Greaves experience points which he can spend on any of the three separate skill wheels. There’s a wheel dedicated to each of the three main weapon tranches: close combat, gunslinger and rifleman.

But the bad guys don’t exactly employ advanced tactics in their efforts to thwart you. Their repertoire is limited to dodging left to right between cover points, overwhelming you with sheer numbers to fill the screen with bullets or (in the case of the special ‘shielder’ and ‘shotgunner’ enemies) walking slowly towards you. Strength in numbers is probably their most effective technique, and demands that you regularly employ Greaves’ ‘concentration’ skill to slow down time and pick off a few in one fell swoop.

When the level doesn’t end on a duel, it tends to throw you against one of the largely forgettable mini-bosses. Whether you’re having to lob dynamite at a chap behind a gatling gun, circle strafe around a tiny arena pumping headshots into a bullet sponge bandit or taking your time picking off an outlaw who’s pathfinding has got him stuck on a pile of logs, each is as lacking in invention as the last.

Gunslinger isn’t content to just restrict player actions with its narrative. Level design is cramped and almost entirely linear. There are moments where you can diverge from the path to explore room-sized areas (perhaps for the ‘Nugget of Truth’ collectibles that give you extra experience and a spot of historical text,) or get a height advantage on the next pack of enemies, but it’s otherwise A-to-B stuff. It’s no coincidence that large potions of the later levels take place in narrow train carriages.

Try to leave the boundaries of the map and you’ll get a passive-aggressive reminder that “you’re straying from the story,” followed by a spot of Old West teleportation if you persist with your rebellion. The game wants you to search around for Nugget collectibles, but not too far from the road.

Looks pretty on rails to me.

If you’ve paid any attention to the screenshots dotted throughout this review, you’ll probably have noticed how narrow the Field of View is. It’s oppressive to the point of being claustrophobic, a fact not helped by the choice of putting a stylised border around the screen at all times. If you get motion sick easily, Gunslinger may not be for you. A future patch really needs to address this, because releasing a PC game in 2013 with an FOV this uncompromising is pretty pathetic.

All of these knocks against the game’s mechanics are a shame, because the central narrative framing device is a strong one. Gunslinger is open in its intent to be a tribute to the dime novels about the Old West, using this conceit to explore the gap between reality and romanticised legend. Each level is presented as another installment in the Silas Greaves mythology, and this approach is even carried through to the in-game damage indicator (which puts holes in the ‘camera’ as if bullets were tearing through a page.)

While Greaves’ version of events is fanciful, complete with shape-shifting Native American chiefs who (he implies) can turn into wolves, the external texts linked to the collectible Nuggets adopt a practical, historical tone. It provides a neat contrast, and lets you enjoy the sensationalised depictions of the Old West even as you learn the harsh realities. Unfortunately, despite being referenced in a few of the texts, women don’t get much of a look in. Bell Starr is mentioned, but doesn’t appear. Instead, the sole female representative is Molly the bar wench. If you’re hoping that the writing team attempted to give her the same complex depth of character as someone like Joanie from Deadwood, you will find only misery.

This is DEFINITELY a good idea.

Even though some of the characterisation is shallow, the collaborative effect of having interjecting voices in Greaves’ tale ends up stronger than the gimmick of having the world dynamically change with his recollections. As he attempts to play up an escape from a burning location, the other audience members get distracted with talk about the Titanic. It leaves our protagonist deflated, and means yet-another-escape-from-fire-bit in an FPS is accompanied by precisely the right weary tone. Silas Greaves may not be John Marston, but he proves to be an engaging and often amusing enough companion for the five hours or so it’ll take you to finish the story mode.

There’s no denying that Gunslinger chucks plenty at you for your money. Story mode has a ‘new game plus’ (where you retain your skills) and an unlockable ‘True West’ difficulty, while Arcade and Duel Challenge offer a hefty slice of score-attack action. The broad stylistic flourishes do a fair job of masking the underwhelming reality of much of the gameplay, but once Greaves’ tall tale is told you’re left with a pretty linear, whack-a-cowboy shooter in a no-horse town.

By Andrew Farrell10 hours ago
Hardware

By Keren Philosophales1 day ago
Hardware