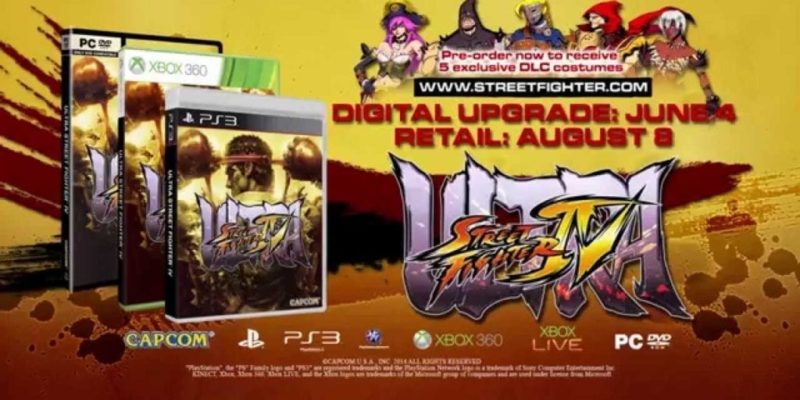 The digital upgrade versions of Ultra Street Fighter IV will release across Europe on June 4th for PlayStation 3 and Xbox 360. On August 5th, the PlayStation 3 and Xbox 360 retail versions will be in stores, with the full digital bundles available for download then too. Both the digital upgrade and full digital bundle for PC will be out on August 8th.

Players who pre-order the digital upgrade of Ultra Street Fighter IV on European PSN or the full retail version at select retailers will receive the 2014 Challengers Costume Pack, consisting of alternate costumes for each of the five new characters for free. The five new costumes include: Jungle Elena, Medieval Hugo, Pirate Poison, Wizard Rolento and Gladiator Decapre. The pre-order program officially kicks off today, so be sure to check out the alternate costume character art and new trailer here!

In Ultra Street Fighter IV, Poison, Hugo, Elena, Rolento and Decapre join the fight, complete with new animations and their own unique play styles, bringing the final roster count to a massive 44 characters. Six new battle environments (including Pitstop 109, Cosmic Elevator, Half Pipe and more) provide a thrilling and colorful backdrop to the action. Direct fan feedback was gathered on all of Super Street Fighter IV: Arcade Edition’s original 39 characters and core system mechanics in order to achieve the most balanced Street Fighter ever. In addition to the action-packed new content and the finely-tuned rebalanced gameplay, the new version features a host of new features and modes that are sure to test even the most well traveled world warrior.

Pay What You Want for Cubit the Hardcore Platformer Robot