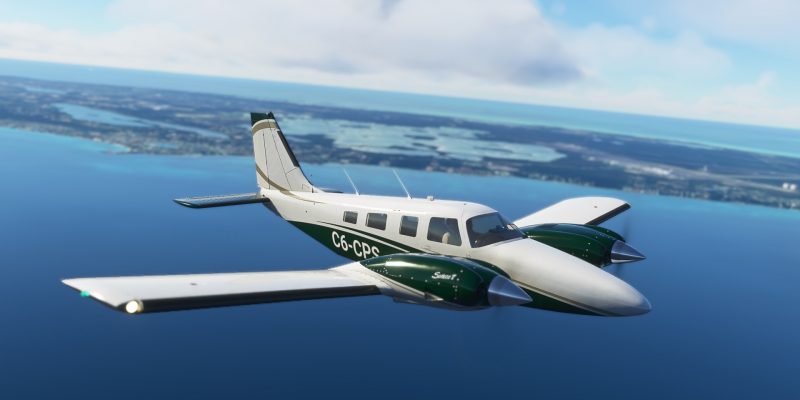 Microsoft Flight Simulator has become known for being a general aviation (GA) flyer’s dream. Its fairly accurate level of representation of most areas around the world makes it perfectly suited for flying low and slow, which is exactly how most GA aircraft operate anyway. Thus, it’s no wonder why most of the default aircraft are in this class. That said, it’s been a few months since its release and that default selection, while nice, does get a little old after a while — especially if you fly often. All of these factors are why I’ve been enjoying Carenado’s take on the 1997 Piper PA34T Seneca V for my last few flights in Microsoft Flight Simulator.

It’s similar in both performance and even design to the Beechcraft Baron, another aircraft in the sim. However, Carenado’s extensive work on the Seneca’s flight dynamics and features have made it a real treat to fly.

Having lived in the Bahamas for most of my life, aircraft of this sort are a very common sight. So, I figured what better way to test out the Seneca other than island hopping. And that’s exactly what I did. 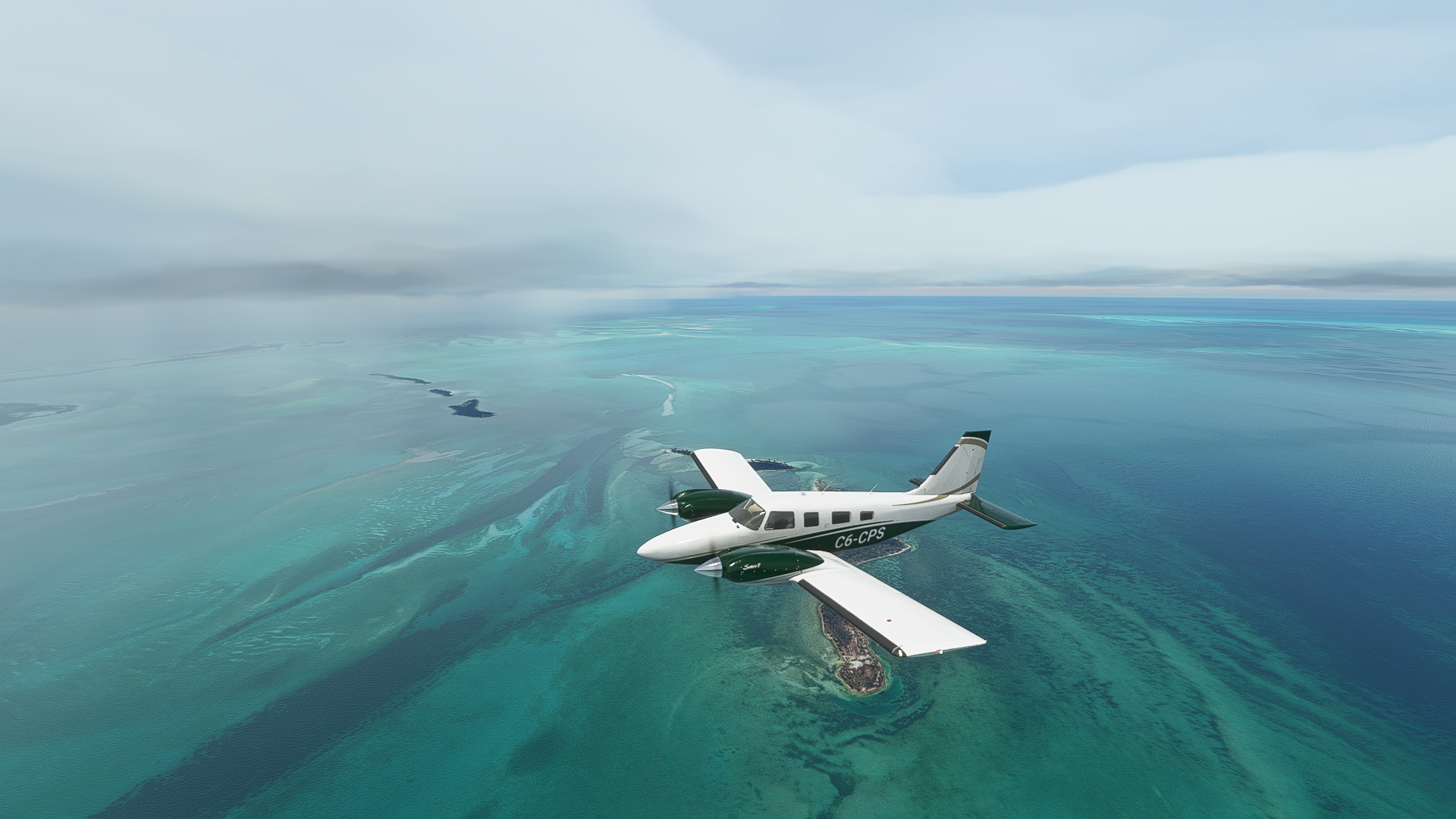 My journey with Carenado’s Piper PA34T Seneca V began from Miami Executive in Florida. I flew south to Key West, deciding to hang low and fly parallel to the well-known Overseas Highway. It’s already quite the scenic journey from the road, but flying above just makes the blue hues of the Gulf of Mexico all the more gorgeous to look at.

After landing in Key West, I did a turnaround operation to take off again and head northeast to the first Bahama island of the journey, Bimini. 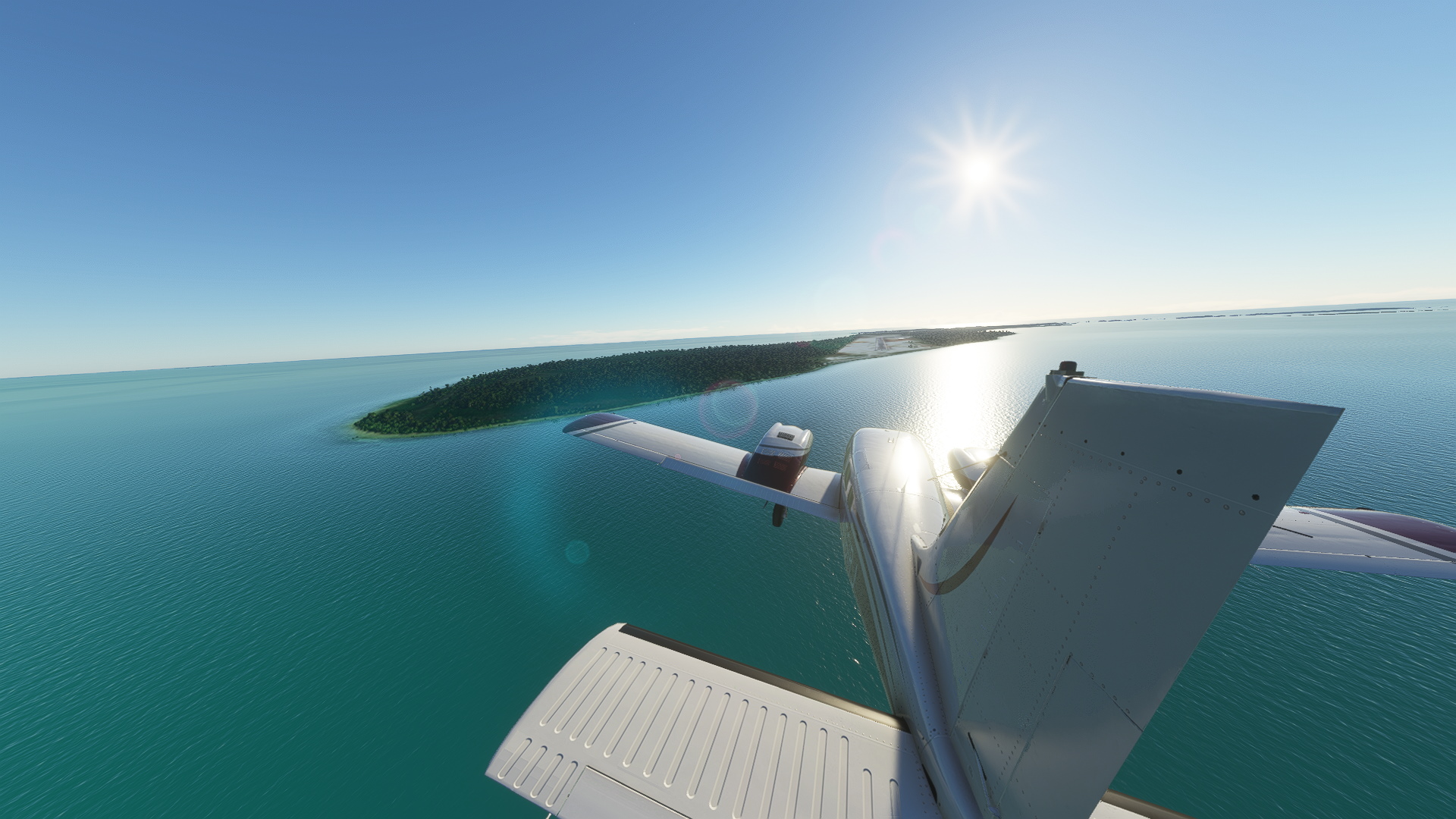 Bimini is the closest Bahama island to Florida, and thus sees a lot of traffic from boaters and private aircraft such as the Seneca. Following the beautiful sunset approach into Bimini, I pushed further east to visit the island of Eleuthera, another common destination for tourists. After that, I made a short hop over to New Providence, the capital island of the nation and my birthplace. 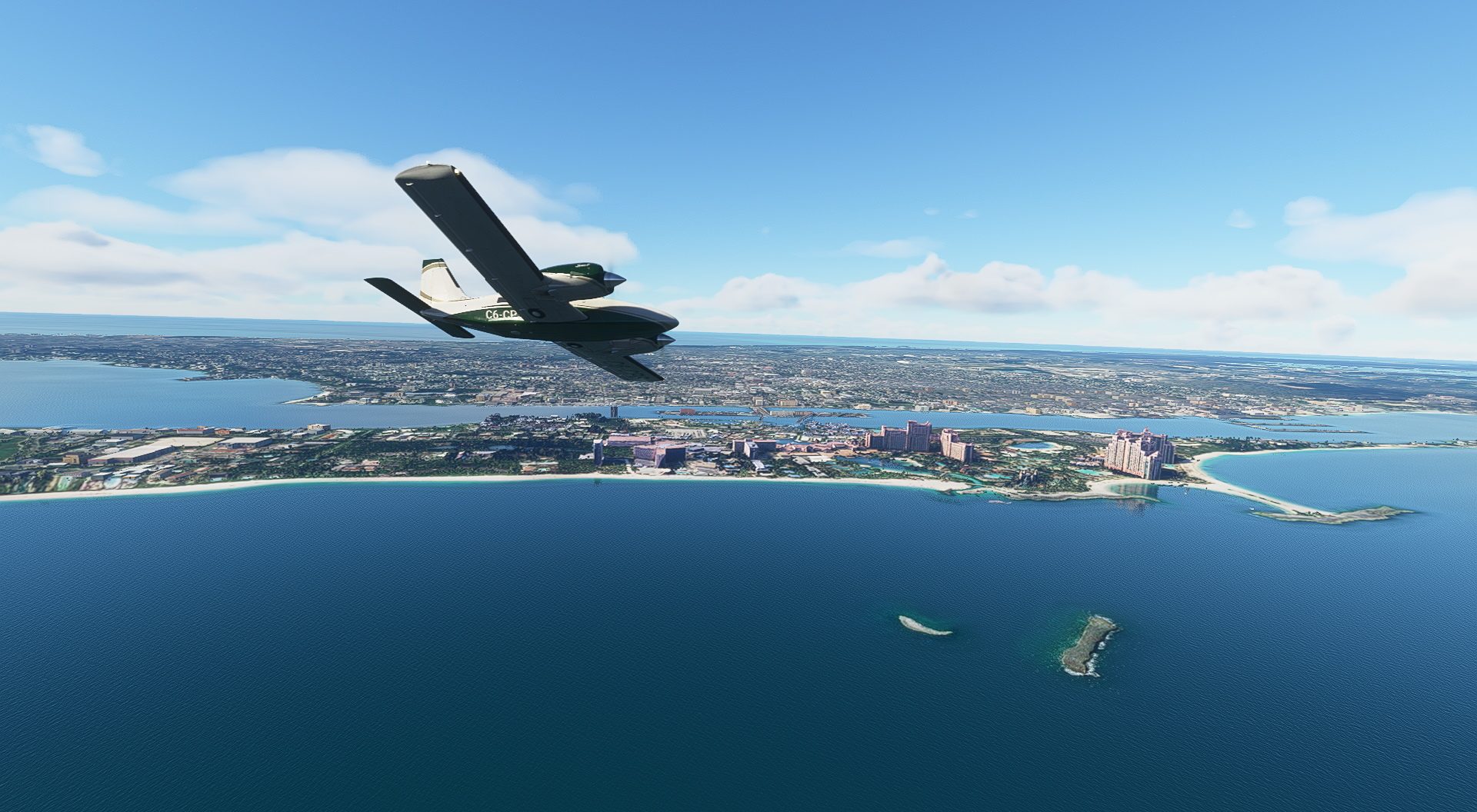 At this point, I felt that I already had a decent understanding of the Seneca. But, I still wanted to try one more thing. I took it “home” by completing a flight that I’ve done maybe a million times already both in real life and in various sims: New Providence to Grand Bahama. Grand Bahama is the northernmost island in the country, and it’s the place where I’ve lived most of my life. Buzzing into its airport with the Seneca made me feel as free as the dozens of real-life GA pilots that I see flying in and out of the island all the time.

Indulging in the intricacies

Performing this series of short hops around the tropics was the perfect use case for the Seneca. As I mentioned at the onset of this article, it really didn’t take long at all for me to become fond of this little twin-prop. Comparing it directly to the default Beechcraft Baron, the Seneca has a slightly more complex feature set. Mainly, a lot of its buttons and knobs are fully interactive, along with extras like being able to open the doors, open the pilot-side mini window, and pull down the sunshade. 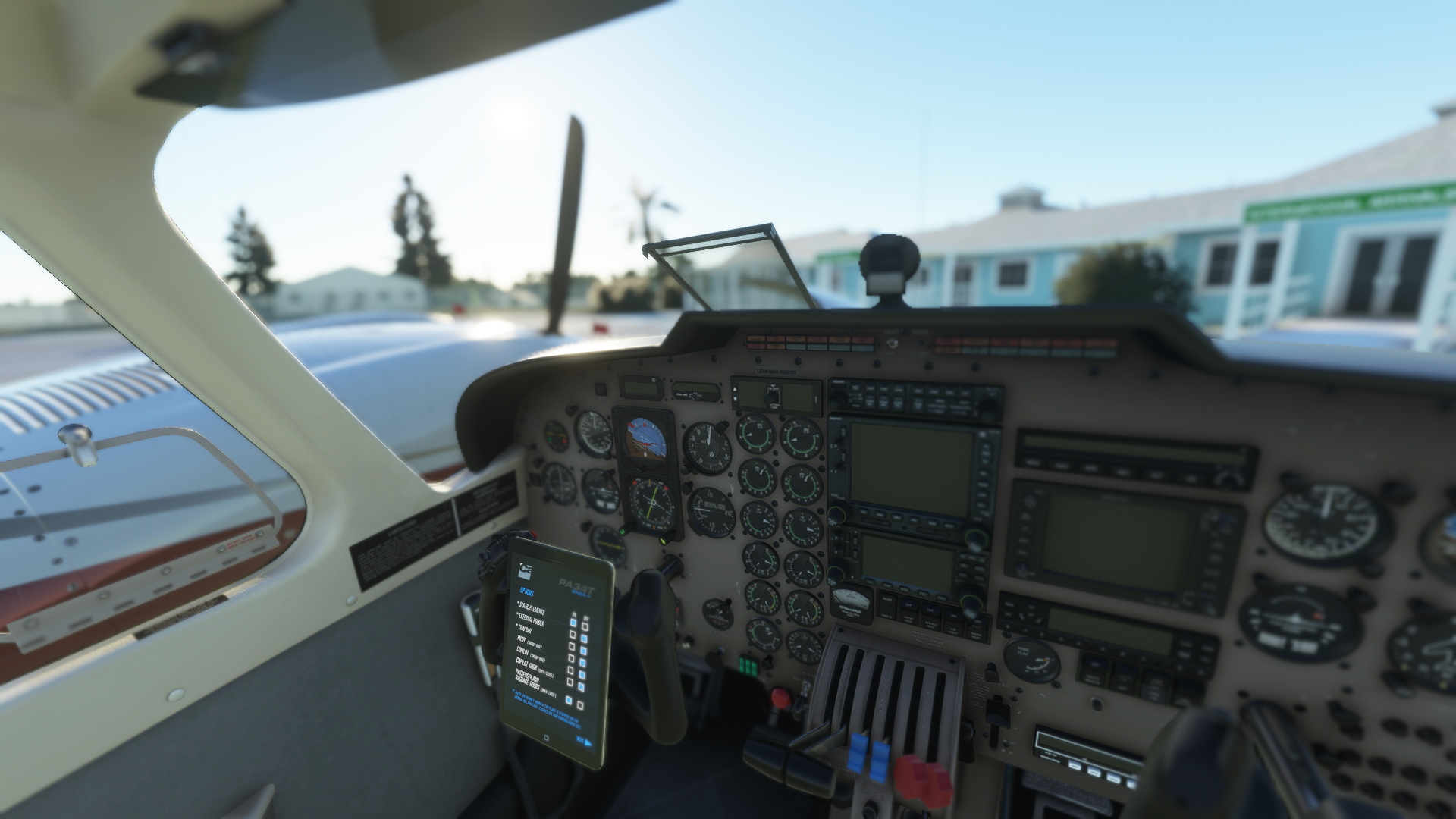 You can also toggle some external objects on and off while the aircraft is parked, like engine ties, chocks, and a tow bar.  Even some of the Seneca’s animations look a little more advanced than the default planes, such as how the little pegs attached to the wings can be seen streaming along in the wind as the Seneca flies.

That said, the interior and exterior texture work is straight-up beautiful. Every surface is well detailed. Combined with Microsoft Flight Simulator‘s powerful graphics engine, the Seneca is a thing of beauty. But, of course, the flight dynamics is where Carenado’s extra work is truly seen. 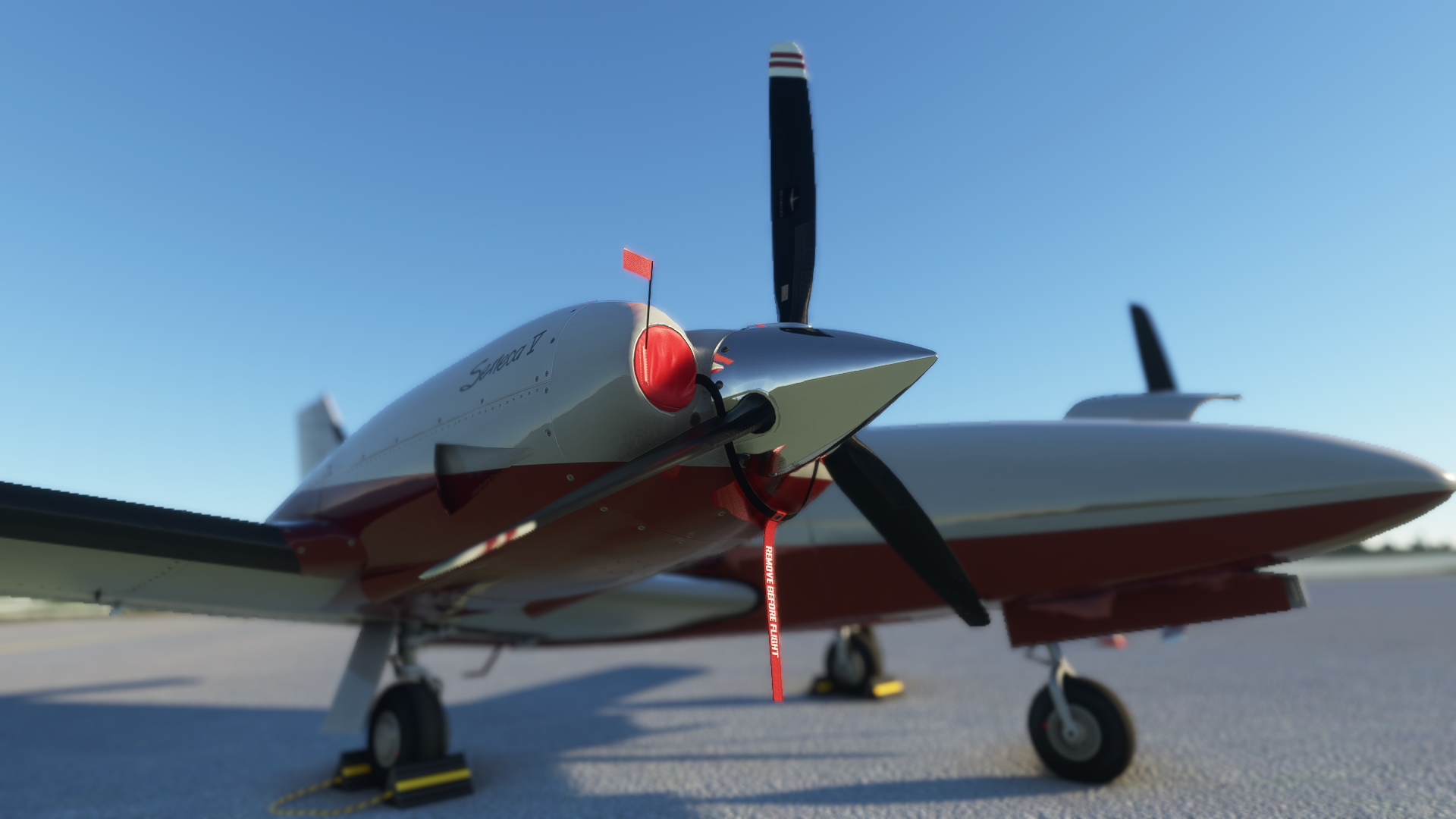 Carenado’s Piper Seneca V is stable, has a good climb rate, and can fly at a decent clip (though, of course, it’s not as fast a turboprop). Even taking it through a small storm didn’t phase the little twin flyer much at all. On that note, I noticed that the streams of rain against the windshield seemed slightly more dynamic than in the default aircraft, which is another cool attention to detail. The Seneca also has a decent autopilot system that’s capable of heading hold, altitude hold, and vertical speed shifting. It’s exactly what you need to have an enjoyable flight without having to think too much about it. Not to mention its solid extras like a Garmin GNS530 GPS and WX radar for getting a bird’s-eye view of the weather ahead.

It’s a simple aircraft to fly and, best of all, it’s easy on the framerate. But that’s to be expected considering it’s a far less advanced plane than something like the highly-advanced Aerosoft CRJ. Nevertheless, considering just how resource-hungry Microsoft Flight Simulator is, I was a bit fearful that all of Carenado’s extra work might cause a performance tax. Thankfully, it seems to run hardly any different than the default GA planes. 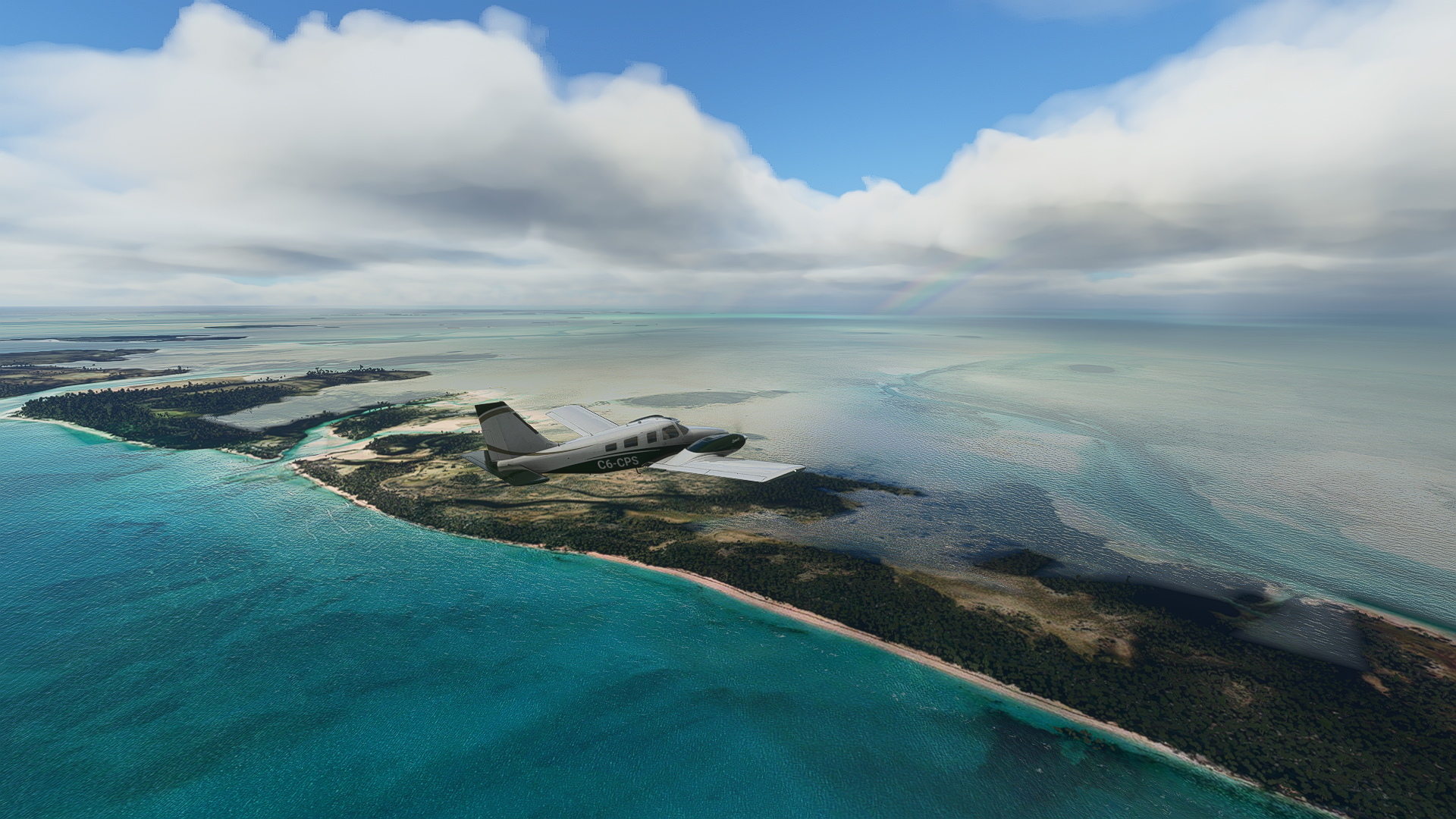 Similar to Just Flight’s Piper Arrow, Carenado’s Seneca demonstrates just how good an aircraft can be in Microsoft Flight Simulator when it’s given special attention. This isn’t to say that the default planes are bad. They do come off a little more “cheap-feeling” compared to high-quality payware such as this, however. That said, the question of “Is it worth it?” purely depends on type of virtual pilot that you are. 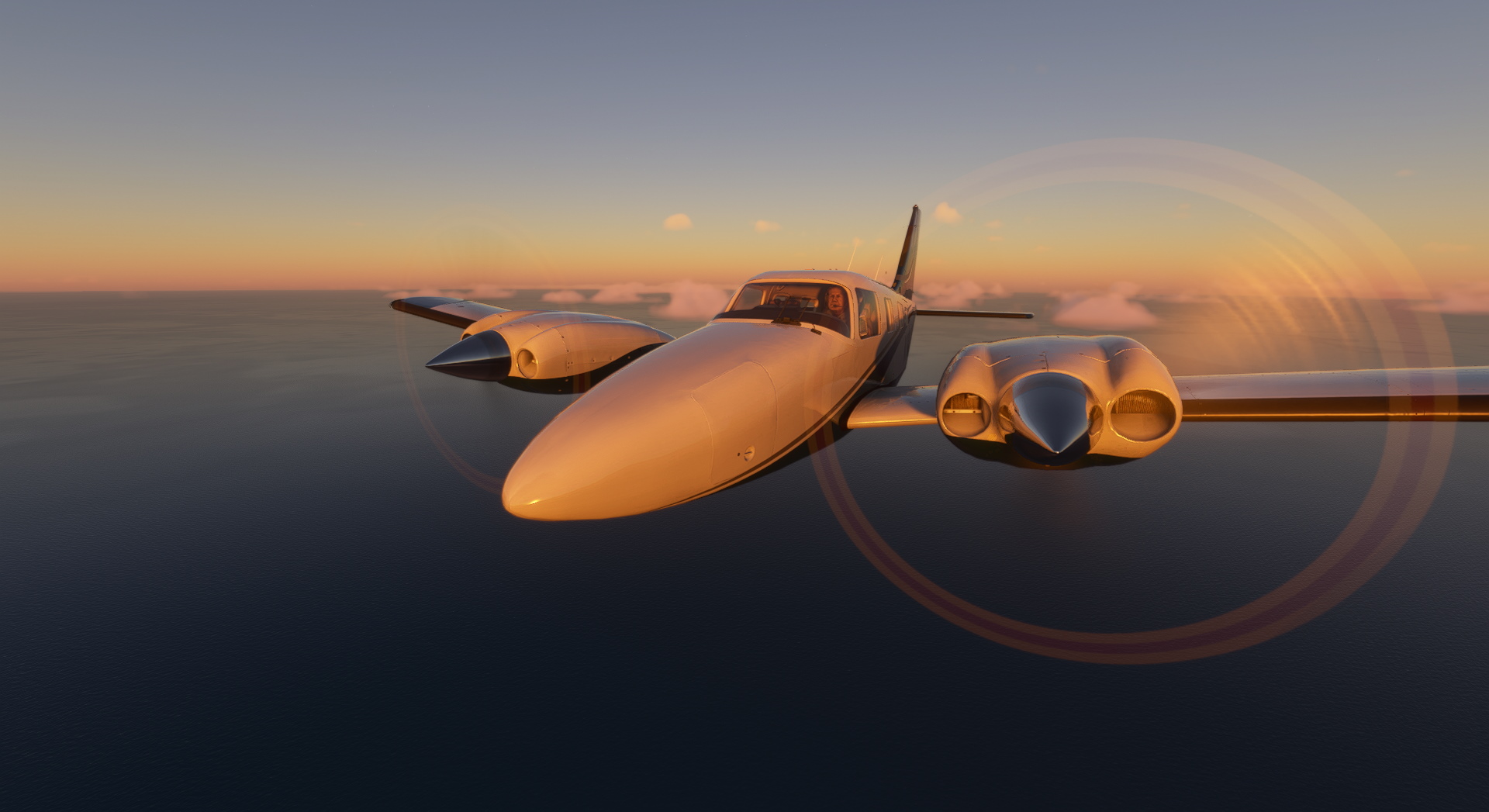 If you’re someone who wants a truly authentic GA experience with this sim, then yes, Carenado’s Piper Seneca V for Microsoft Flight Simulator is the bee’s knees. It’s quick and large enough to be more versatile than something like the Arrow without being as intimidating as more advanced aircraft. Essentially, it’s a good middle ground. However, a casual player likely isn’t going to appreciate the difference in visual quality and flight dynamics. The $40 USD asking price is certainly going to be steep for someone like that. But, if purity is what you want, then it’s a fine little twin to have in your hangar.

By A.K Rahming19 hours ago
Features

By Kevin Foley4 days ago
Features