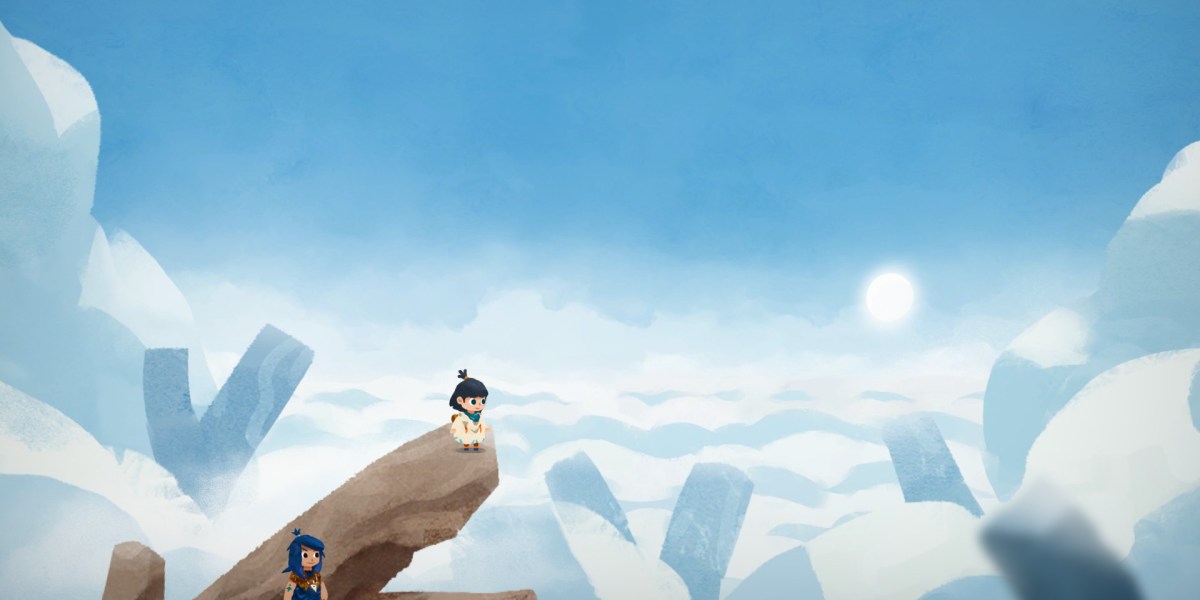 Carto could potentially be the year’s best indie adventure — it’s certainly the most charming. Like its developer Sunhead Games, the game is overflowing with creativity and heart despite its small size. It’s a lovely journey of discovery and an awe-inspiring experience with a solid blend of puzzles and exploration. Involved, intimate gameplay and incredible attention to detail make even the smallest islands feel remarkably rich and expansive.

That detail is immediately apparent in its lively, hand-drawn art. Every island is treated with striking colors and shapes; no two biomes are even remotely similar. A bountiful supply of bright, skeletal earworms infuse in each island, and every area of each island, a distinctive flavor. Carto commands your attention with its near-oppressive atmosphere, courtesy of its cohesive audiovisual experience. The animation count is astounding, every character and object has a certain vigor that breathes life into their surroundings.

Four corners of the world

The sheer variety in presentation and gameplay is doubly impressive considering that high-level of quality is maintained across seven hours. In the opening hour, you’re introduced to the titular explorer and her map-shifting superpower. Together with your new friend Shianan, you journey across myriad islands, meeting new people and solving quirky puzzles. You’ll need to sharpen your lateral thinking skills if you’re to find and reunite with your grandmother. 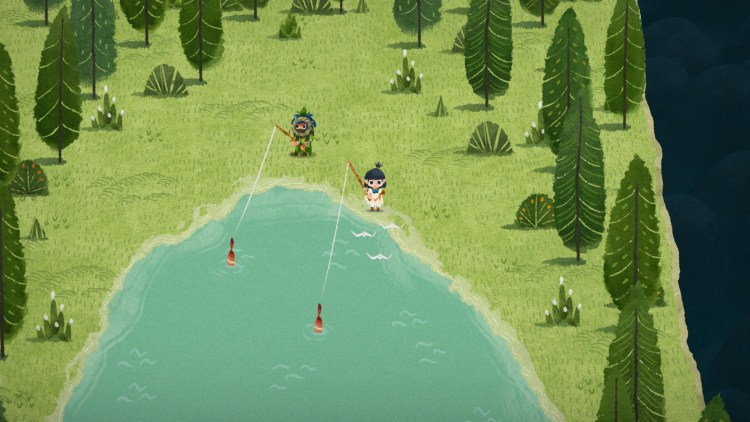 Carto’s signature tile mechanic makes up the backbone of the game’s multitude of puzzles. Each chapter, usually representing an island, is broken up into predominantly square tiles. Carto can open her grid-based map, where she can manipulate every available map tile, rotating and moving them. Tiles can be connected provided the now-adjacent tiles have matching borders. Tiles with a forest on all sides will fit snuggling between other forest-sided tiles. Alternatively, tiles containing a path must continue another path started another tile, so on and so forth.

But it doesn’t stop there; each chapter introduces new twists and mechanics that build on the previous puzzles. Manipulating the orientation of a tile — its current rotation or relative position — may change the properties of said tile. There’s even a possibility to fill in gaps with new tiles provided the existing ones are properly arranged. Puzzle-solving never gets stale as new evolutions of mechanics and puzzles are always in abundance, from start to finish. 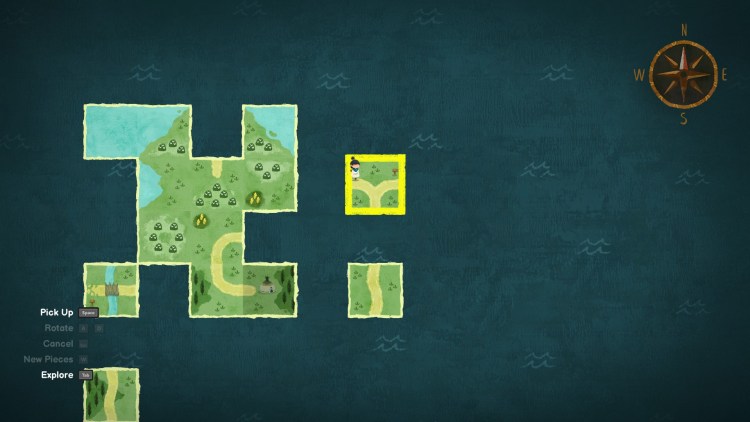 A Lego set for the gods.

Around the world in 80 tiles

Much of Carto’s charm lies in its steady stream of encouragement to think outside of the box. Beyond each chapter’s initial string of puzzles is a slew of curveballs that require a creative mind. This quirkiness embedded in each puzzle is the lifeblood of the game. But once you open the floodgates, it grows a tad difficult keeping track of your possibilities. The game dangles in front of you so many options, and at times, it’s hard to tell which pieces belong to which puzzle. The dialogue hints are always a tremendous help, but it wasn’t always enough to keep me grounded.

To some degree, you have to forfeit your own logic in exchange for the game’s. In an effort to stay wacky, Carto occasionally creates false leads and puzzle beats that disturb the cadence of that particular chapter. You could be channeling every lesson you’ve been taught to close out a puzzle, only to discover the answer lies inside an interaction with a random sheep. In fact, I wished a few mechanics had been explored further. More often than not, however, this constant trial and error is appreciated. Most surprises land gracefully, and add to a sense of whimsicality that is, overall, a net positive for the game. 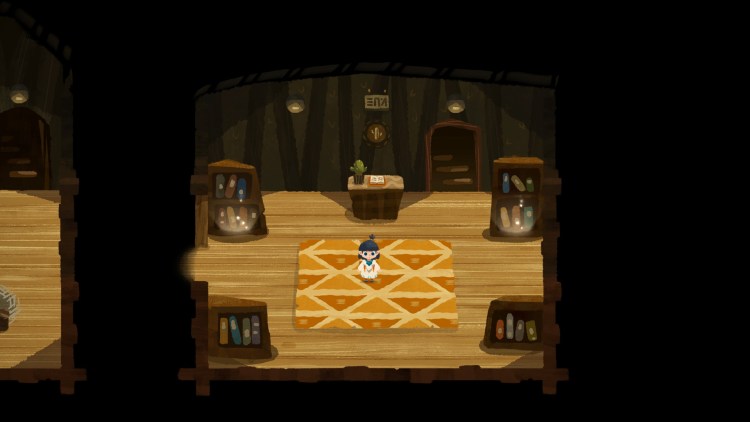 Your own private islands

Following every fierce challenge is a quiet calm. Within each chapter is a well-paced, well-plotted, set of exploratory puzzles. On a macro level, the game flows beautifully from one chapter to another as well. There are plenty of longer, more demanding chapters, but a good number of smaller, more story-focused ones as well. Later chapters demand a level of mastery over the core tile mechanic, but emphasize novelty over callbacks to specific evolutions of certain mechanics. For this reason, Carto remains a light, casual experience, despite some genuinely tough head-scratchers.

Ultimately, it’s your own curiosity that pushes the sails on Carto’s little boat. At the heart of Carto is the joy of discovery and the emergent, personal stories that are a product of its mechanics. No two players’ islands will be exactly the same. In spite of the game’s generally fixed solutions, the way you choose to arrange tiles is largely up to you. Your personal contributions to the world send ripples throughout the experience. Every island map has your fingerprints on it — Carto’s adventure even more so. 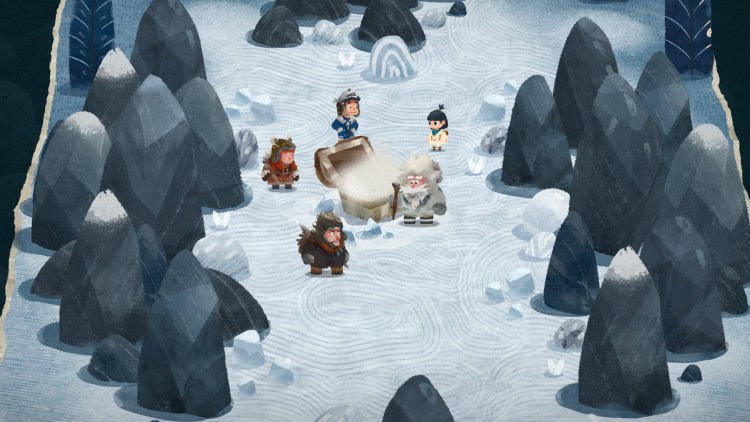 Maybe the real treasure was the frien—

Map to my heart

Working with you and the mechanics is a hilarious script that only bolsters Carto’s aesthetics. While the story, a lost child finding her way home, is unremarkable, the storytelling is admirable. Every character is eccentric, and more importantly, alive, even if their gameplay contributions aren’t all that noteworthy. Every conversation is organic and makes mention of the game’s minutiae, shining a light on every square inch of the game. The details are where you really fall in love with a game, and Carto never lets you forget them.

And for the exceptionally arduous explorers, a handful of secrets are scattered across the chapters, encouraging further experimentation. Everything about Carto speaks to the overwhelming amount of love that’s been poured into the game. You will not find a single tile that hasn’t been meticulously labored over. The game is unadulterated, joyous exploration and experimentation all the way through. 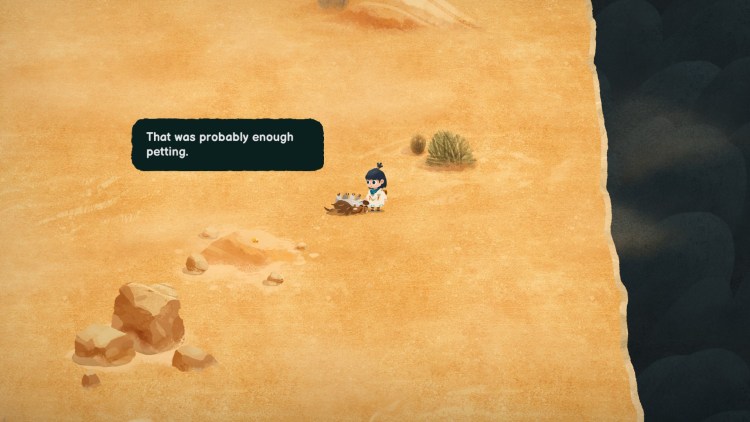 As an adventure game, Carto isn’t about conquering the unknown so much as it is befriending it. There’s a constant line of communication between you and this world thanks to flexible mechanics that foster and reward creativity. Its charm and humor generate a warmth that makes every island feel like a home away from home. Every facet of the experience effortlessly captures the spirit of discovery and friendship, presenting it through a unique lens.

Carto is a strong contender for the title of 2020's best adventure. Involved, intimate gameplay and incredible attention to detail make even the smallest islands feel remarkably rich and expansive.