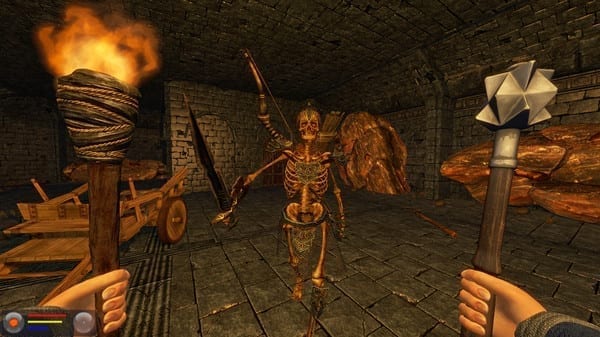 The dungeon crawler is one of the oldest, most reliable tropes in gaming. It has existed in various capacities for over 3 decades now and isn’t likely to stop any time soon. Castle Torgeath might not be the most unique or inventive game in the genre, but it’s still a fun time that’s worth a look for anyone with a hankering for some dungeon action.

Castle Torgeath begins simply enough. As a nameless explorer, you get trapped in the titular castle and must find your way out. Along the way you must avoid traps and fight monsters, all the while making sure to eat. You even meet some other people and a few friendly monsters who are willing to assist you in your quest to make it out in one piece.

The story is basic and fairly uninvolved, but it’s good enough for what it is. Books and documents filling in little pockets of lore are scattered all around and there are lengthy conversations to be had. The story isn’t insanely well-written by any means, but it’s competent enough and doesn’t ever bog down the gameplay. 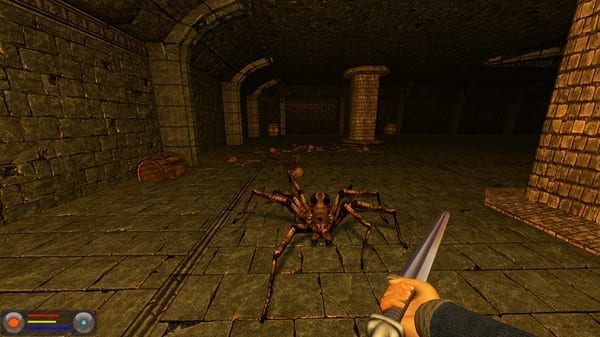 Castle Torgeath Is Ugly, But In The Best Way

Visually, the game is very poor. Low-quality textures, assets and character models are everywhere, but that’s basically unavoidable in full-length 3d games for the most part. At the same time, the ugliness and jank of the visuals are kind of charming. Sure, everything looks bad, but it works with the overall tone of the game and succeeds in delivering the intended experience, so it’s certainly not all bad.

The gameplay in Castle Torgeath is mostly what anyone familiar with the genre would expect. You play in first-person and explore, fight enemies and collect items along the way. The game is somewhat reminiscent of King’s Field and the like. You have meters for your health, magic, and hunger. If your hunger falls all the way, you start losing health. In earlier builds of the game, health didn’t regenerate, but it now regenerates up to 70% of maximum when you’re out of combat. This makes the game extremely easy.

That isn’t really an issue, though, as the combat isn’t worth much on its own. You have a few weapons of varying effectiveness that you use to strike at your foes and block their attacks. There are a decent variety of enemies on display as well. One unique attribute Castle Torgeath has is that every enemy you dispatch fills up a container on the screen. When the container is full, a dangerous enemy appears and must be dealt with. Much like the rest of the enemies, this one isn’t difficult to contend with, but it’s neat that the game gives a consequence for seeking out combat. 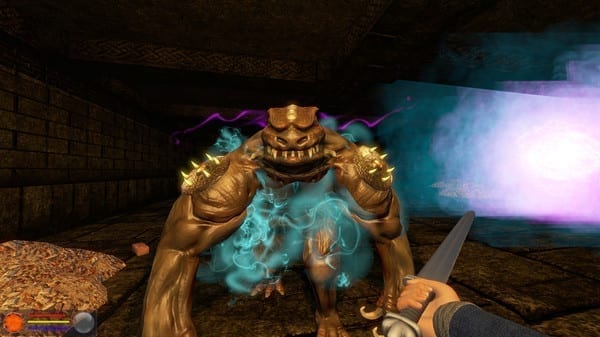 Oh, the enemy meter filled up. So, uh, how have you been, Mr. Hideous Abomination, sir?

The Hunger System Is Kind Of Pointless, But Enjoyable

As stated previously, Castle Torgeath has a hunger system as well. The levels are absolutely packed with far more food than you’ll ever need to use. Not only that, but the amount of different kinds of food is surprising. Bread, cheese, pies, you name it. By the end of the game, my inventory was totally full of all the food I never actually needed. Life and magic potions can also be found scattered around. Since life and magic regenerate on their own, these are rarely necessary and I eventually found myself just discarding them in order to keep space in my inventory for all other crap I didn’t need.

Castle Torgeath also does a good job of having several different large levels with different textures and types of layouts. Early on, I expected the game to use the same assets and everything ad nauseam throughout, but the devs made sure that the environments, much like the enemies, wouldn’t get monotonous. The game even has a few puzzles to boot. There’s also a map that comes in very handy when exploring all the nooks and crannies of all of the levels.

Lastly, there’s also a magic system. The game has a few spells that allow you to use ranged attacks. These attacks are generally better than weapon attacks, but they can deplete your magic fairly quickly and leave you wide open when the meter enemy is hot on your heels. The majority of these spells are just colored projectile attacks, but they work well enough. 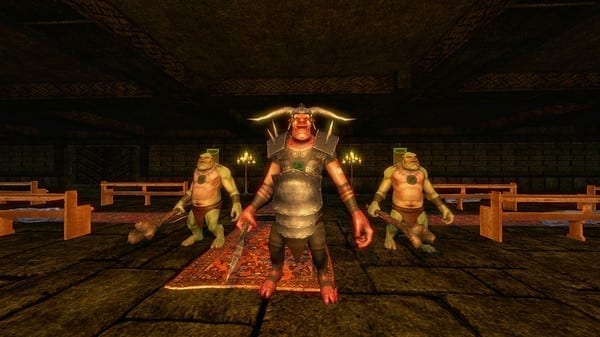 Gotta love friendly monsters. Not in a The Shape of Water way, mind you.

You’re Absolutely Not Going To Need Any Gold

You can also find gold that lets you buy potions from NPCs, although you’ll certainly never need to do so. This gold can be found scattered around or in chests. You can also find jeweled swords and other items that can be converted into gold value as well. One thing I still don’t understand is Castle Torgeath‘s ore. You can find pickaxes that allow you to collect ore from ore veins, but I was never able to find any use for them, which was curious.

Junk collected throughout the levels also lets you buy temporary buffs from spirits, which are unnecessary. It’s also worth mentioning that you collect experience points that you can put into your stats. I played most of the game without realizing that this option existed, which I absolutely kicked myself for, even if it didn’t make much difference when all was said and done. At the very least, the extra health would have come in somewhat handy, but the game made no attempt to clue me in that such a system existed.

Suffice to say, Castle Torgeath is a decent-sized game. It takes about 8-9 hours to beat and absolutely doesn’t overstay its welcome. Sure, it’s very clearly a budget title and is loaded with certain amounts of jank, but it’s still a good time. Any fans of dungeon crawlers looking for a surprisingly solid adventure that lasts a good while for a cheap price would do well to pick this game up.

Xbox Game Pass Is Available For $1, But There’s A Catch