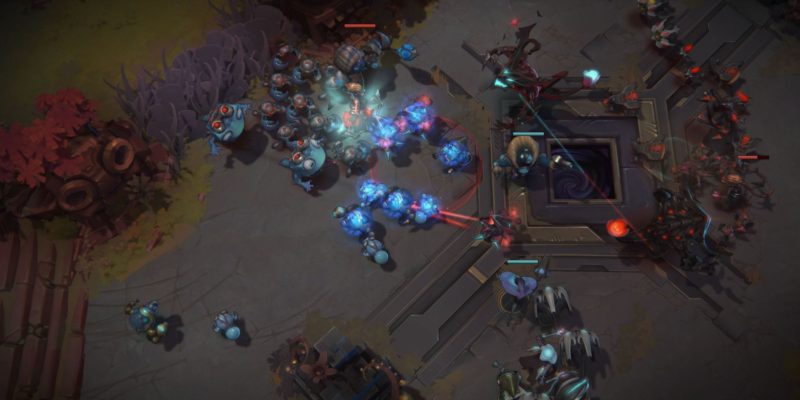 Guardians of Atlas has been in development at Artillery Games for a few years but today the studio announced they are stopping all work on the game.

The game was a MOBA/RTS hybrid and Youtube personality and StarCraft Brood War pro/commentator Day[9] (Sean Plott) had been involved with the game’s development until he departed the Artillery team in August.

Artillery has now decided to call it a day for unspecified reasons, which is strange as the game went into an open Alpha testing phase on 26 August. An update from the development team reads:

It’s with a heavy heart that we must share some sad news: Artillery won’t be able to support further development on Guardians of Atlas.

We’re still trying to sort out the exact details, but we’ll let you know in the next few days.

It has truly been a pleasure working on Atlas with you. Seriously, you’ve been a fantastic community. A passionate, insightful, positive, helpful community. And we wish we could’ve worked with you longer. <3

On a personal note, I wanted to sincerely apologize for our sudden radio silence during the last couple of days. We’ve always tried to keep active communication with you – you deserve it – but it’s been a challenging week for all of us here. And we’re still figuring out the exact plan.

But again, I want to thank all of you so much. I’ve had so much fun playing, discussing, and enjoying Atlas with you. Please don’t hesitate to ping me on Discord at any time, for anything.

I really can’t stress enough how much it’s meant to all of us that we managed to get such a passionate community. It kept us going when things were really tough. So thank you guys for turning out to playtests for months, or for running a community tournament because you just wanted to get so much out of the game. It’s difficult to really come close to doing justice to how much we appreciate that through words. <3

Artillery was founded in 2013 by three ex-Googlers, Ankur Pansari, Ian Langworth and Mark Logan and had raised 11m in funding from investors.

Below is a video announcing the open alpha test on 23 August. This is what was available before being canned.

By Mike Straw1 min ago
Hardware