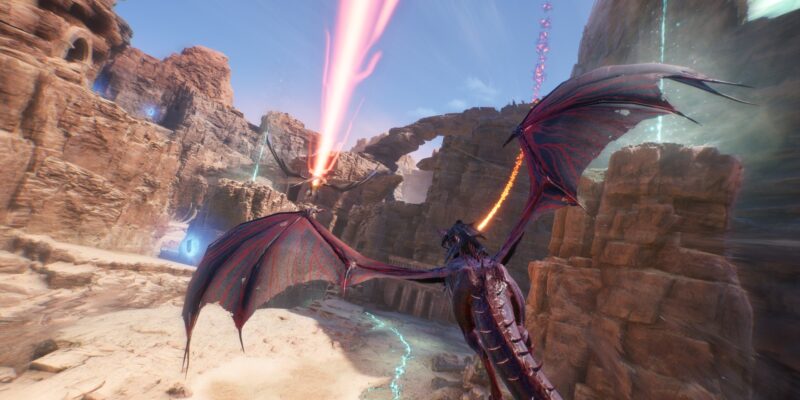 Video games have always shared a close relationship with dragons. Whether you’re riding them or sucking out their souls, dragons have remained a popular staple for a reason — they’re awesome. Developer Playwing clearly knows this, and is attempting the marry the glorious sky lizards to competitive online arenas. I recently got to spend an hour with Century: Age of Ashes in a new gameplay preview, which included new modes not yet seen.

As it was my first time in Century, I started off with the tutorial. One concern I had before diving in was the responsiveness of the game’s titanic beasts. But any unease got squashed fairly quickly.

Through the air with the greatest of ease

Thankfully, in Century, the controls are tight and responsive. Even before I finished the easy-to-follow tutorial, I already felt like I had mastery over my flying reptile. Those skills were put to the test in my first actual fight against human players: a three-on-three match over a frozen, rocky map. It was large enough that it took a good 10 seconds for my team to meet up with our enemies. And once we did, we took the fight to them hard, as fireballs flew and dragons clashed along the ground and high in the air.

It was a good introduction to the battles expected in Century. I took pleasure in using a jet of wind to reach the highest points and scout an enemy separated from the pack. From there, it was nearly effortless to point my beast in the right direction and use a boost to come up from behind. Once you’re close enough to your prey, the UI highlights them with a target. Fireballs will track foes, allowing you to pay more attention to not crashing into the surrounding scenery. Once close, a new reticle shows up, indicating I was close enough to use my flamebreath, which is as advertised: a stream of flame that locks onto opponents. 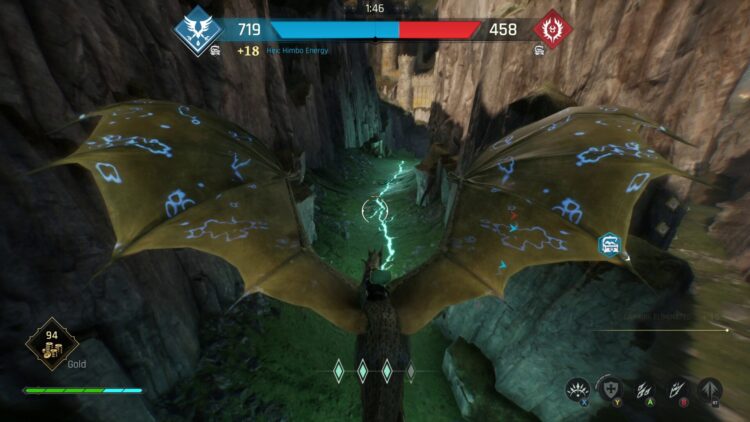 Stamina can be recharged by flying over energy rifts that snake across the floor.

Hoarding gold, as a dragon is known to do

The deathmatch, however, was only an introduction. What developer Playwing was really keen on showing off were the two new modes not found in the closed beta back in March. The first was Spoils of War, a two-team, six-on-six match in which the side with the most gold wins. Yes, it plays on the gold-hoarding dragon trope, but in a winner-take-all multiplayer format. It’s set on a much larger map than what I played just before, with two massive stone keeps on either side adorned with blue for allies or red for the enemy side. Rocky pillars dot the landscape, allowing for cover or opportunities to juke an opponent on your tail. Golden AI-controlled dragons lazily fly about in this mode, and killing one causes it to explode in a shower of gold coins. Passing through the coins will absorb them, as the UI displays how many you’re carrying.

But you’re not the only one aware of how much gold you have. The game shows how many coins each player is carrying. When I had more than 100 coins in stock, the game informed me that I had to drop it off at the keep or else risk losing it all. That’s pretty much the game here: you can play the hoarder, gathering coins from the golden dragons or enemies, or protect allies whose pockets are full to bursting. Once you have gold, you need to deposit it at your keep. The team with the most gold stashed by the end of a time limit wins the round, and the first side to win two rounds takes the match. 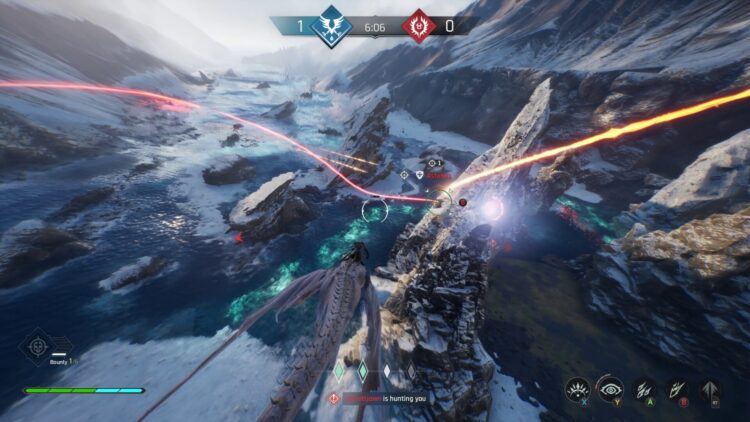 Fire from above. And sometimes below.

I don’t know what’s going on, but it’s kinda sick

Spoils of War gave me a good idea of what a real, high-stakes game of Century is like. The three-on-three deathmatch was cathartic by comparison. Players on opposing sides would meet at a gold dragon, blasting fireballs and spitting flames. And while the mode was about hoarding gold, that didn’t stop things from getting sweaty. More than once I found my nearly broke self getting chased regardless. Though the controls are smooth, my piloting skills weren’t quite up to par, and I ended up smacking headlong into walls and pillars as I was being hunted. Still, it was enough of a, ahem, trial by fire that I eventually got the hang of this new environment and mode.

And it was a treat. If my earlier deathmatch was an appetizer, Spoils of War was the main course. In my matches, I found myself ducking and weaving, darting through underground caves and under dilapidated stone buttresses. Chasing or being chased, Century firing on all cylinders is a heart-pounding good time, and never for a moment dull. Fireballs streaked through the sky, dragons fell like fat hailstones, and players using their class’ special abilities would turn invisible or leave green trails of noxious gas. Hidden cave systems would zip you around the map, sometimes directly into another mid-air skirmish. It was madness, and a hell of a lot of fun. 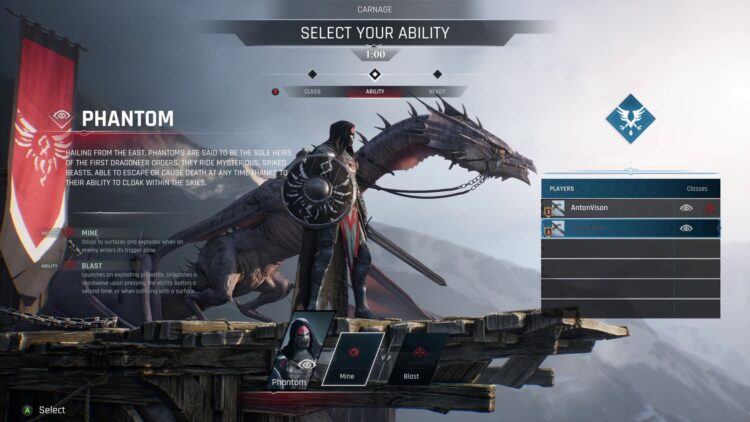 The three classes in the preview each had special abilities.

But those good times didn’t come without a cost, at least for me. Unlike the smaller game type, Spoils of War asked a hefty tax from my rig. Even as the match began, I noticed my performance chugging by 20 or more frames. We also played a second new mode, called Carnage, which was a more traditional deathmatch but on the same map. Both modes caused frame drops, providing an apt reminder that Century: Age of Ashes is still a work in progress. However, I didn’t ask how old the preview build was. There’s a good chance things will be ironed out by the time the game reaches its December launch.

Gear up, grow up

During the preview, I also got to check out some of the game’s other features. Century: Age of Ashes will release as a free-to-play game, with items such as cosmetics for your dragon and dragon rider as items you can purchase. Completing matches offers experience points, and the further you go along, the more items you unlock. I managed to secure a pretty gnarly-looking set of armor for my dragon. So, there are cosmetics you can earn naturally through play. There are a lot of items as well, ranging from capes to helmets, weapons, leggings, chest pieces, and dragon saddles. You can also raise your own dragon by hatching eggs. I got an egg shortly after my first match. It hatches after you get enough experience, and you help it grow by completing quests like dodging a fireball. And they’re so cute! 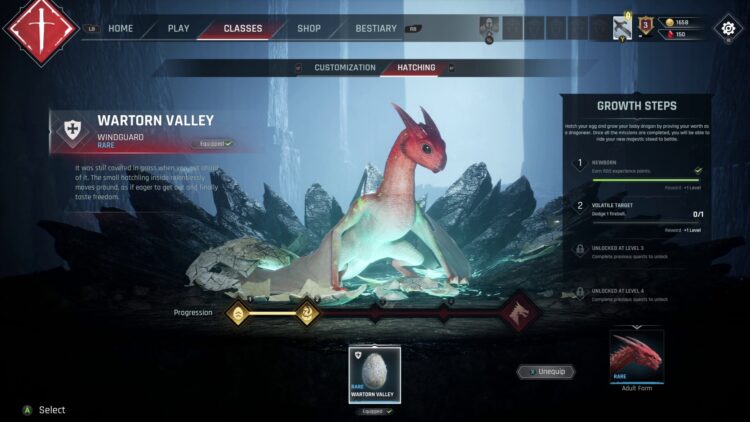 Though my time with the game was only an hour, I felt good about Century: Age of Ashes. Really, my main concerns revolve around performance. I’ve also since wondered if the in-game rewards will be enticing enough to keep players coming back. However, if anything, the gameplay should do the trick. Century looks great and plays exceptionally well, and the battles I experienced were thrilling. I’m looking forward to giving it a real go when it launches on December 2. I need to finish raising my little baby boy.

Details on next Call of Duty game reportedly leak, described as ‘grim,’ with ‘realistic gore’

Giants Uprising — Is it worth it?